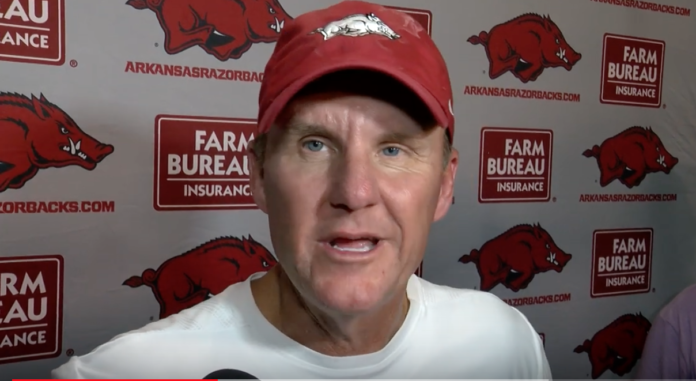 The Arkansas receiving corps is arguably the most talented group on the football team this season. This week, after a rash of Razorback injuries, they are far from the deepest.

In Monday’s press conference, Razorback head coach Chad Morris said freshman Trey Knox missed practice Monday due to illness. He added wide receiver Jordan Jones will miss from two and a half to four weeks with a high ankle sprain sustained in Saturday’s scrimmage. He said Jones’injury was similar to the one suffered by freshman defensive lineman Eric Gregory, who got minor surgery today and should return to practice in the next week.

This comes on the heels of the biggest Razorback injury news of the weekend: Senior Deon Stewart will be out for the season after an ACL tear. “When he went down Saturday, we didn’t think much of it. We thought it was just something minor but then went in that afternoon for an MRI,” Morris said.

It’s unfortunate for him, a great young man and young leader. He’ll definitely be missed but he’ll be back better than ever. He’ll be back stronger. We’ll obviously go after his sixth year of eligibility [through medical redshirt]. That’s something we’ll go ahead and apply for.”

Fortunately, Knox should be back very soon. CJ O’Grady should return early next week after getting arthroscopic surgery for an injured knee. And receiver Koilan Jackson, who has spent nearly two years recovering from an ACL tear, should return to practice by Friday.

Chad Morris: “Colton was back today. It’s something where we got to just watch his foot and make sure we’re not overworking him.”

On the Razorback injury news for Austin Capps (knee injury):

“We thought we may get him back today, but it looks like he’ll try to get in tomorrow and get some reps. If not, on Thursday and then later in the week. We probably won’t scrimmage him on Wednesday.

On who impressed Morris catching punts in Monday’s practice:

“We had Buster [Monteric Brown], Jalen Catalon and Treylon Burks back there. We’ve got a group of guys and we’re just kind of waiting to see on that right now.”