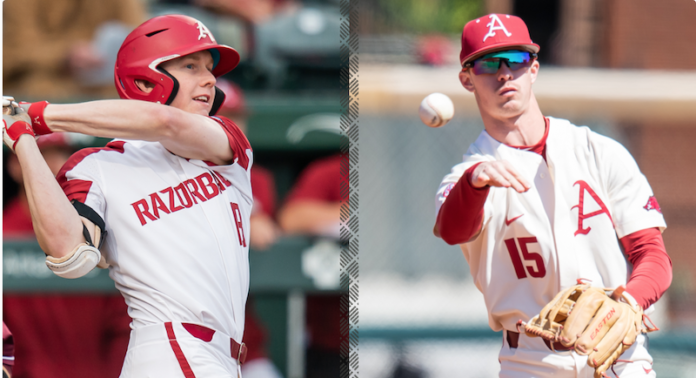 The Razorbacks baseball team, ranked as high as No. 4 in preseason polls, is set to begin on February 14. Already, MLB Draft analysts have fallen in love with a major reason the Hogs are so widely respected: superstar juniors Casey Martin and Heston Kjerstad.

Both Martin and Kjerstad are racking up preseason accolades left and right.  Perfect Game recently named the duo as first team Preseason All-Americans. This makes Arkansas the nation’s only program with two first-teamers.

Just as impressively, all major 2020 MLB Draftniks are projecting Martin and Kjerstand will go in the first round of June’s draft. On top of that, in the last few months, some of them are projecting both Hogs will go in the Top 10. Such a Top 10 dual drafting would be unprecedented for any Razorback duo in baseball, football or basketball.

Where will Casey Martin be drafted?

In Baseball America’s top 10 projection released in the fall, Casey Martin will go No. 6 to the Seattle Mariners. Despite his 5’11 frame, Martin delivers “some surprising pop in his bat thanks to elite bat speed, but can struggle to make contact (23% K rate in 2019) and the hit tool is a question,” according to SB Nation’s Kate Preusser.. “The strikeouts will be the thing to watch as Martin embarks on his junior year with the Razorbacks, as that will likely largely determine where he’s selected.”

“…A college player will also, ideally, line up with the stated target goal of competition in 2022ish, although again with the way Jarred Kelenic has zoomed through the lower minors, the Mariners might be more comfortable with selecting a similarly highly-polished prep bat or arm.”

“Teams famously don’t draft for need but it’s impossible to look at the Mariners system and not see the relative dearth of infield prospects, even as the outfield and pitching crews have seen their crops blossom and flourish. Provided he can cut down on his strikeouts, Casey Martin profiles to be a must-needed boost to the Mariners’ infield of the future.”

Over at MLB.com, Martin is also projected as the No. 6 pick.

“Martin has the best power/speed combination in the college ranks, slamming 28 homers in his first two seasons with the Razorbacks while displaying quickness that earns top-of-the-scale grades from some evaluators,” Jim Callsi writes. “His right-handed swing can get too uphill at times when he gets too focused on home runs, and there’s a chance he winds up in center field rather than sticking at shortstop.”

Where will Heston Kjerstad be drafted?

In most mock drafts, Kjerstad is slated to go a few spots behind Martin. You’ll often see him in the No. 10 to No. 20 range. However, a couple of the mock MLB Draft writers think the 6’4” Kjerstad is a better prospect than Martin.

Perfectgame.org, for instance, has him as the No. 9 prospect while leaving Martin out of its Top 10.

Meanwhile, the Red Sox analysts at ThroughtheFenceBaseball.com, say this:

“Heston Kjerstad is a OF/IF player who stands 6-foot-3 and weights 180lb. He is out of Amarillo, TX where he plays for Randall High School. He currently has a tall and slender build, thus allowing him to pack on muscle and strength. He is considered an above-average runner, clocking in at 6.56 in the 60. He has good quickness in the foot, a compact arm motion, and regularly makes highly-accurate throws.

He maintains an open stance at the plate, has quick hands, and regularly gets the barrel into the strike zone quickly. The only negative scouts have marked thus far is that he often has late lift out front of the ball.”

MLB.com’s Jim Callis projects Kjerstad will go at No. 8. “The top offensive performer on the U.S. collegiate national team this summer, Kjerstad is a better hitter than Martin and has posted slightly better numbers with the Razorbacks. The top left-handed power hitter in the college class, he’s a decent athlete who profiles well in right field with his pop and solid arm strength.”