Despite a terrible 2017 season, and despite a poor start to the 2018 season, Arkansas has a Top 25 recruiting class — at times as high as No. 17 according to some services. This is a testament to the recruiting prowess of Hogs coach Chad Morris and his assistants.

But will all their hard work be sabotaged by rival coaches if the Hogs’ 2018 season continues to sink?

That’s one of the questions Richard Davenport, the recruiting analyst for the Arkansas Democrat-Gazette, recently addressed on “Sports Talk with Bo Mattingly.” Host Bo Mattingly asked him if, based on what he’s seen with Chad Morris’s recruiting efforts,  Morris can change the program.

Before talking about future possible signees, Davenport first addressed the critical issue of whether some current players have “signed on” to Morris’s system:

“I think there’s definitely some guys that have not bought in and I think it trickles down to other guys. You know, obviously, there’s freshmen class and there’s not a lot of those guys playing. There are some because the ability to play four games and still be richer, they’re definitely experimenting. They’re trying different combinations and including the freshmen in there, but I don’t know how many will play beyond those four games.

Those [freshmen] were recruited by these guys. They bought in. They bought in because that’s what they know. The previous classes… I’m sure some have bought in and some haven’t and you’ve got to have everybody on one accord. Far as what the staff can do recruiting-wise, I think they’ve shown that they have the ability to recruit at a high level and they’re doing it, really, in a low point in Arkansas football. So once they get their own guys in and start winning games and then start winning maybe at a high clip, I think the future has the potential to be very bright. It’s just going to take time.

On Whether Any Arkansas Football Recruits Will Decommit

It’s kind of hard to say, Bo. I mean, you’re talking about 19 kids that are currently committed. Each individual has a different process and different maturity level and some kids may not be able to see that, hey, this was a possibility and it’s going to be a rough go, maybe, for a year or two. But at the same time, you’ve got to believe in yourself and say, “I can help turn this around.” I think a lot of the guys do think that, but at the same time, if the season goes potentially the way some of us think it could, it’s going to be trying.

But these coaches worked extremely hard at recruiting. They’re going to stay connected with these guys. They have great relationships with them right now. Will that be enough to keep them all on board?

[In Bret Bielema’s] first year, when they went three and nine, the best that I can recall, they only lost Jermaine Eluemunor, the offensive tackle from junior college. He flipped to Texas A&M because of how the season was going. So the possibility exists, but there’s no way to really truly know it until maybe later on in the season, and we’ll see what happens.

I think people are really underestimating Beaux Limmer. I really, really like the kid. He’s 6’5″, 270 pounds. Obviously, he’d have to get on campus and add at least another 20 pounds to have an opportunity to play next year. Not saying he will. You don’t really want to rely on freshmen on the offensive line. And then there’s Joseph Stone, I really like him. I think he has a high upside. He’s 6’8″, about 315 right now. I think he has the ability to play at a high level pretty soon, on the college level. 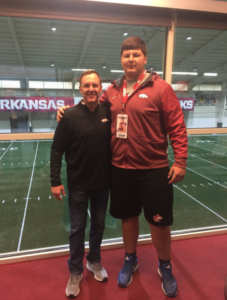 Joseph Stone is a big, big boy (via Twitter)

Tim Anderson is supposed to be coming in from junior college. He’s about a 6’5″, about 280 pound offensive lineman who could play, I think, all the positions on the offensive line. He’s coming in for the Alabama game. Very athletic kid.

Josh Cooper is a 6’6″, 350 pound guy from Navarro. He’s coming in for an official visit later in the season. And Chibueze Nwanna from Lackawanna College in Pennsylvania. He’s also visiting after the season, and he’s another guy. Very good size. About 6’5″, about 300 pounds plus, so they’re obviously looking at the junior college ranks to try to add immediate help for next year.

Yeah, I think Barry Lunney said it best. They’re more aggressive. [Morris’s coaches] definitely extend a lot more offers than the previous staff. They do an excellent job of staying in contact with them and that’s a key. You cannot not stay in contact. If you miss a day or two, not reaching out to these kids, you’re just inviting other college coaches to come in right now, and I promise you, those other colleges are trying to come in right now because they smell blood and they’re trying to get into kids’ heads. You’ve got to combat that every day, and I think this staff does a very good job of that.