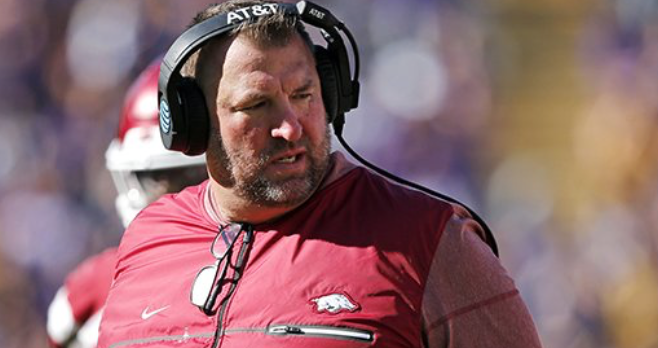 For weeks, it was speculated that Bret Bielema would take his talents to South Beach after the Patriots’ post season ended. Bielema, who’s currently serving as consultant to New England head coach Bill Belichick, was rumored to be a frontrunner for the Miami Dolphins’ defensive coordinator position. That job, however, is expected to go to the Packers’ linebacker coach Patrick Graham.

Instead, it looks like Bret Bielema may stay in New England.

Bielema said he expects to fill the Patriots’ upcoming vacancy at defensive coordinator after the Super Bowl, according to the Boston Globe’s Ben Volin. (Brian Flores, who currently performs those duties, is expected to become Miami’s next head coach.)

If Bielema is hired, it will fall in line with Belichick’s habit of promoting from within. “It would be rare for Belichick to make an outside hire and elevate him immediately to one of the coordinator positions,” Volin noted. “When outsiders Bill O’Brien and Dean Pees joined the Patriots’ staff last decade, they had to work other jobs first before being elevated to coordinator.”

Bielema is on staff, but doesn’t hold a traditional position coach job. A few months after he was fired by Arkansas in late 2017, he landed with New England to help with scouting for the 2018 NFL Draft.

He has not publicly spoken at length about the duties of his job as Belichick’s consultant. But Belichick did offer some insight a few months ago:

“Bret’s got a lot of experience. Obviously, he was the head coach at Wisconsin, Arkansas. He’s dealt with a lot of different players, situations, and he’s primarily worked on defense as an assistant coach, so he’s given us some help there between the defensive ends and tackles.”

“He’s also been somebody that I’ve used and has helped me with some overall head-coaching-type responsibilities — planning and team management and things like that.”

Until today, a frontrunner for the New England job was rumored to be Greg Schiano, the former Ohio State defensive coordinator and Tampa Bay Buccaneers head coach. Schiano could still very well join the franchise in “a top defensive role” beneath Bielema, however.

[Of note, Chris Ash, the current Rutgers head coach, worked for both Bielema (as defensive coordinator at Arkansas in 2013) and for Schiano (as co-DC at Ohio State).]

If Bielema does get this promotion, it will be good news for the Razorback athletics. Bielema would almost certainly get a seven-figure salary, by a franchise that historically pays its top coaches very well. It’s reported that Patriots offensive coordinator Josh McDaniels, for instance, makes more than four million dollars a year.

Last winter, it was reported Bielema would get an $11.935 million buyout from Arkansas that would be paid out in monthly installments through the end of 2020. His buyout is reduced by the amount of his salary, so the more the Patriots give him for working, the less the Razorbacks have to pay him for leaving.

Then again, when it comes to this whole promotion thing, perhaps Bielema is just all talk.

If that turns out to be the case, Razorback fans wouldn’t be surprised in the least.

Read more about Bielema, his parting with Arkansas and resurfacing in New England below: