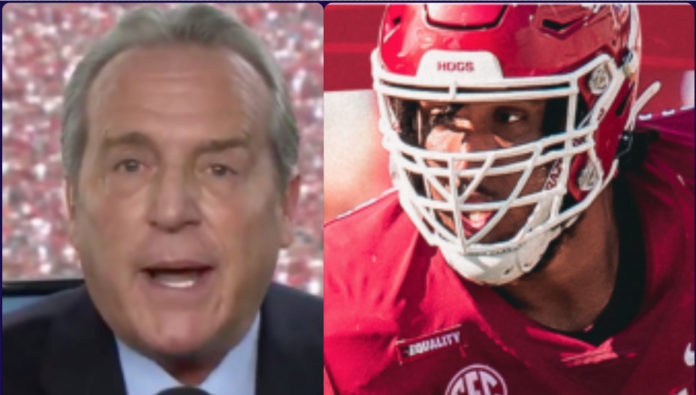 Before the 2021 season began, guard Ty Clary said he felt that the Razorbacks’ offensive line would considerably improve over 2020, when it finished tied for worst in the SEC in sacks allowed and in the middle of the SEC in rushing yards.

“I think the offensive line has improved quite a bit,” Clary said in August. “I think bringing back a lot of experience from last year, second year in the system, and then just a little bit more leadership out of some other guys in the room, we just jell together. I feel like the O-line is going to be excellent this year.”

So far, that’s been pretty much on target. If the offensive line doesn’t quite yet qualify as “excellent,” “very good” still fits. The result is a 7-3 record, the SEC’s No. 2 rushing attack and a general consensus that head coach Sam Pittman and offensive line coach Cody Kennedy will soon have the unit back to the level it was playing at in 2014 and 2015 when Pittman was the Hogs’ position coach overseeing standouts like Denver Kirkland, Sebastian Tretola and Frank Ragnow.

You can also see the unit’s improvement in 2021 almost across the board in these numbers compiled by HawgSports.com’s Danny West. He breaks down multiple categories including rushing average vs SEC teams (up from an average of 10 in 2016-20 to No. 4 in 2021) and sacks allowed (up from an average of 90th nationally in 2016-20 to 51st nationally in 2021).

For all the good that the Razorbacks’ offensive line has accomplished, however, one prominent CBS broadcaster doesn’t think it will show in Saturday’s Arkansas-Alabama game.

Brad Nessler, CBS’ play-by-play man for Arkansas vs Alabama, can see Arkansas giving up a season-high number of sacks — “six or seven” — against the Crimson Tide because he sees the Hogs getting behind early and needing to throw the ball more than they would like.

Brad Nessler Loves Himself Some Will Anderson

In a CBS preview piece about the game, Nessler hardly mentions the Arkansas offensive line as he’s so smitten with Alabama’s defensive front. Specifically, sophomore Will Anderson, who mans Alabama’s “Jack” position. Anderson has racked up 67 tackles, 23 for loss, 12.5 sacks and six quarterback pressures from the outside linebacker position that serves as a kind of designated pass rusher.

“Anderson has been unbelievable,” Nessler gushed, adding he thinks the 6’4″ 243 pound Will Anderson should be a finalist for the Heisman trophy. “I think he’s on a three-sack pace on Saturday,” he added.

That means Anderson would rack up nearly as many sacks as the entire Georgia defensive unit, by far the nation’s best, got against Arkansas (4). As you can see below, that was the most that the Hogs have given up so far this year, although it should be noted they have also given up three sacks in each of their last three SEC games:

Nessler doesn’t stop there. He breaks down other Crimson Tide he sees giving the Razorbacks’ offensive line trouble:

It’s true that Anderson is a superstar and freak. (Consider he can get up to 10.7 mph running from 0 to 5 yards, which is the fastest on his team.)

Sam Pittman acknowledged as much this week in his presser: “Certainly, defensively, Will Anderson is as good a player as anybody has on their team. He’s going to be a major concern of ours. The number one thing you try to do is not let a difference-maker make a difference. In his case, it’s very, very difficult. It’s been fun to watch how different teams have tried to approach that problem. None of them having too much success.”

Pittman and his staff have been studying two SEC teams that held Anderson to zero sacks this season — Florida and especially Texas A&M. Both times, slowing Anderson was a group effort.

This is to guard against what Nick Saban and his staff like to do with Anderson.

“They do a lot of what I call behind the center blitzes,” Pittman said earlier this week. “So they’ll take him all the way behind the center. They’ll take him into the A-gap. And he has so much speed, so our tackles really, really need to have a good week of practice. Because if you sit wide on him, it’s over. I mean, he’s going to come in and he’s going to beat it.”

Pittman translated that into more simple terms, as AL.com reported:

“Basically what they’re trying to do is pick the tackle and not give the guard time to come off,” he said. “And he’s so fast.”

While Nessler didn’t intend to directly insult the Arkansas offensive linemen by essentially predicting six or seven sacks by Alabama on Saturday, he still glossed past the vast experience they have which should come in handy against Anderson et al.

First of all, nothing Alabama does will be a surprise after what Arkansas saw against Georgia’s incredible defense and LSU’s all-out blitzing banshees. Most of the below Razorbacks not only have plenty of experience this year, but across four, five and even six-year careers.

That’s a lot of miles on the odometer, which should shine through on Saturday. “You’ve got a lot of starts in there with the Cunninghams, the Wagners, the Clarys, the Strombergs,” Cody Kennedy said in fall camp. “These guys have been in a lot of games, a lot of snaps. And that experience just breeds confidence, and they’re able to see those situations that arise almost before they do it.”

Not only that, but most of these linemen are a lot bigger and stronger than the last time Alabama played Arkansas (a 52-3 drubbing in December 2020). The unit has put on about 28 pounds of muscle, on average, from a couple years ago.

“It makes the game a lot easier being heavier,” Razorbacks offensive tackle Dalton Wagner said. “It sucks, looking back when we wanted to be smaller so we could move better, when it’s like we’re probably moving better now when we’re heavier.”

Dalton Wagner, at 6-9 and 330 pounds, plans to use that strength against Will Anderson. But he knows he’ll need to do that from awkward positions, so this week the Razorbacks practiced putting themselves in “bad positions” to know how to react to what they will encounter vs Alabama.

Wagner said the practice plan this week was to put themselves in “bad positions” so they’ll know how to react when they encounter them Saturday.

“He’s an elite, elite pass rusher,” Wagner said. “Kid’s put a lot of great stuff on film. He’s a grown man. He does a tremendous job bending edges, using his hands, powering through blocks. It’s really important that we get hands on him and take care of business when we go against him.”

Will Anderson will have his hands full with the Hogs linemen, but he probably won’t see any new tactics. “I see different protections all the time,” he said at Monday’s press conference. “You get a little 5-0 protection, 70 protection, Charlie protection. Chip in with running backs and stuff like that. It’s been an adjustment but… the coaches and the players, we all come together and kind of find ways around it.”

KJ Jefferson as an X Factor vs Alabama

The Razorbacks have looked susceptible to rushing in recent games, as Nessler is no doubt aware. But whereas the Arkansas quarterbacks of the last few years were prone to taking sacks, KJ Jefferson is the perfect “antitode” to a great rushing defense.

Strong as hell, but extremely quick of foot, he’s among the hardest quarterbacks in the nation to take down. As LSU defenders found out over and over last week (8:50 mark below):

“KJ is the catalyst, obviously,” Nessler said. “He’s probably their best running back,” he added, lobbing another unintentional barb at Dominique Johnson and Trelon Smith. “He’s obviously their biggest threat and he’s got to get it to some other playmakers. And they haven’t been able to do that last year against Alabama. The last two years against Alabama has been really nothing — 100 to 10 is the score between the two games. So they got to get somewhere in the twenties and then hope Alabama makes a bunch of mistakes.”

Brad Nessler is right about one thing: If Alabama gets up by multiple touchdowns on Arkansas early, the chances of the Hogs coming back are essentially nil. For that reason, the game will hang on the way the Arkansas offensive line and KJ Jefferson handle the pressure Bama is bound to bring in the first half.

Will Anderson is too good to be kept away from Jefferson altogether. He’s going to get some chances to bring Jefferson down in the first half. In those moments, the game’s momentum — and the question of whether Arkansas will be able to head into the second half with a legit shot at winning — will hang in the balance.

Yes, Jefferson’s never had to play against a linebacker as freakishly good and unique as Will Anderson. But, for the first time in a long time, Arkansas can give as well as it gets. While Anderson has played against some great dual-threat quarterbacks (e.g. Justin Fields), in terms of size, strength, balance and Houdini-like escapability, he’s never faced anybody like KJ Jefferson.

He mentioned Alabama tailback Brian Robinson, specifically, as someone who will give the Hogs problems:

See the entire interview with Nessler below.

How to Watch Arkansas vs Alabama

Online: Click here to watch the game on your computer, phone, tablet, or another streaming device. The game can be streamed on the CBS Sports Website as well as on the CBS Sports Mobile App. No sign-in is required.

Radio or listen online: Check out all the Arkansas football affiliates here

*The Arkansas rushing attack is one of the best in the country this season, averaging 233.5 yards per game on the ground to rank second in the SEC and sixth-best nationally. Four ball carriers who have each totaled over 400 rushing yards this year in running back Trelon Smith (513), quarterback KJ Jefferson (474) and running backs Raheim Sanders (460) and Dominique Johnson (456).

Arkansas and Ole Miss are the only two teams in FBS that feature four 400-yard rushers this year. The last time the Hogs had four 400-yard rushers was 1975, Frank Broyles’ second to last season as head coach. Running backs Ike Forte (983), Jerry Eckwood (792) and Rolland Fuchs (618) and quarterback Scott Bull (533) led the way for a team that rushed for 320.3 yards per game, the single-season school record.

* Quarterback KJ Jefferson has thrown for 1,990 yards and ranks seventh in the SEC with 17 passing touchdowns. The redshirt sophomore is third in the SEC in average yards per completion (13.5) and fifth in yards per pass attempt (8.8). Jefferson has thrown a touchdown pass in five straight games, totaling 11 over that span with just one interception. He is one of nine quarterbacks in FBS to total at least 1,900 passing yards and 450 rushing yards this season. (via Razorback Communications)