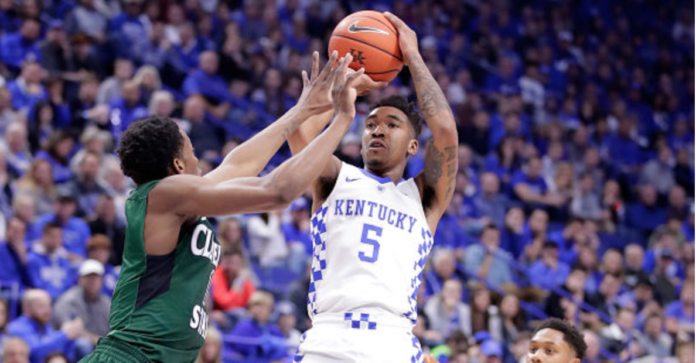 During Monk’s 47-point detonation, the longtime CBS announcer didn’t hold back with the praise

At the start of the 2016-17 season, Bleacher Report’s Jonathan Wasserman assessed Kentucky freshman Malik Monk’s NBA potential. Names like “J.R. Smith” and “Monta Ellis” were thrown out. In the comments, someone chimed in with “DeMar DeRozan” as Monk’s ceiling. Someone else agreed that’s a very good apex.

That ceiling may need to be raised a floor or two after Saturday. At night, in front of a national television audience,  Malik Monk scored 47 points in a thriller against North Carolina. The 6-3 shooting  guard produced the impressive shooting performance from an Arkansas native on a collegiate stage this big that I can recall:

If anybody thought Monk’s scoring ability or skill was overrated, this performance puts those doubts to bed. He is simply the most talented/electrifying scorer Arkansas has ever produced, and could overtake Joe Johnson as the most skilled. During the game, longtime CBS color commentator Bill Raftery, 73 years old and a college coach in the late 1960s through early 1980s – compared Monk’s first step to that of  Michael Jordan’s. (It’s very likely M.J. has watched this UNC-UK game. I’m sure the Tarheel was disappointed in the ending, but he was probably also glad to see Malik Monk — who was affiliated with Nike throughout the summer circuit — develop as a potential Jumpman representative in the future.)

Raftery also made a point of comparing Monk to the most skilled 6-2/6-3 scorer to ever play in the NBA: Jerry West. Specifically, he said Monk’s ability to “get those puppies aligned*” (i.e. his footwork on the jump shot)  reminded him of West’s.

This comparison is important to keep in mind when assessing where Monk will be drafted. He is only 6-3 and only has a wingspan just short of 6-4, and yes, that is short for a pure  shooting guard. Monk, though, projects to become a combo guard years down the line, in the mold of a Russell Westbrook or C.J. McCollum. Almost all all-time players are “combo” in the sense that their skills exploit  personnel mismatches, even if those mismatches come in the form of bigger, taller players.  Given up a few inches in height and arm span isn’t a death wish if the player is talented/skilled/driven enough to not only push through that deficit, but dominate despite of it.

Hakeem Olajuwon, at just over 6-9, is a case in point. He never seemed undersized against the giants of his day, though, because he almost always had the advantage in every other intangible and tangible you would want. Same goes with Steph Curry today at 6-2/6-3, who often has a strength and foot speed disadvantage. While in the 1960s, Curry’s height was more in line with the standard for a shooting guard, Jerry West still would have been a dominant scorer even if had he been a couple inches shorter.

In the pros, Malik Monk can do the same even as an undersized “scoring” guard.

His 47-point first-semester magnum opus hints at that more strongly than anything else. NBA executives are taking notice. In the last few weeks, Monk has more often appeared as a projected pick in the upper half of the 2017 NBA lottery. And, after the UNC win, ESPN’s Jeff Goodman reported an NBA executive can see him going No. 1 overall in the 2017 NBA Draft.**

*Credit to Marcus Monk, Malik’s older brother, for so consistently drilling him on the fundamentals over these last few years.

**Monk would be the third Arkansan to be selected No. 1 overall in an NBA Draft.