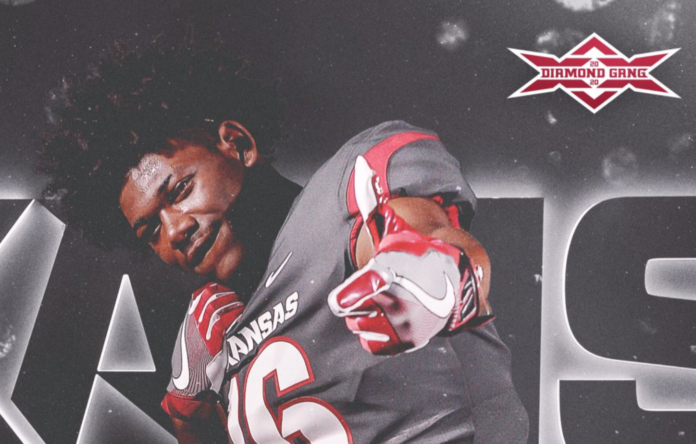 Come 2020, Arkansas projects to be pretty thin at the critical tight end position. By then, senior stalwarts like Cheyenne O’Grady and Chase Harrell would be gone. Until recently, the only tight ends slated to be campus were Hudson Henry and Grayson Gunter.

That changed Sunday with an announcement by Allen Horace.

Allen Horace, a three-star out of Crockett, TX, chose Arkansas over Baylor, Nebraska, Houston and Oklahoma State. As the 27th best tight end in the nation (according to 247 Sports), Horace is “someone who will play early in his career, probably immediately,” recruiting analyst Otis Kirk said afterward.

At 6-4, 233 pounds, Allen Horace is an emerging physical force who will remind Hog fans of former tight end Jeremy Sprinkle, recruiting analyst Danny West said. “He’s just super raw, really long — you know he has a long way to go in terms of getting bigger, developing as a blocker. But I think he’s got a lot to work with,” West added.

Horace “plays defensive end as well as tight end, but just labeling him as either of those things is kind of selling it short,” according to a Rivals.com report. “He did a little bit of everything this past year, playing H-back, outside linebacker, defensive end, wide receiver, you name it. He is big, and has a physical temperament to his game. It will be interesting to see what side of the ball he ultimately will land on, but he definitely has speed and hands. Primarily runs go routes, great vertical which allows him to high point well and land 50/50 balls.”

You can see that impressive ability right from the get-go here:

First off, there’s the camaraderie he felt on campus during his official visit this weekend. “Trey Knox hosted me, he’s a pretty cool kid,” Horace told reporter Nikki Chavanelle. “Me and Trey talked about last year’s team and turning things around. There’s something special happening.”

“I’m trying to win the national championship here, we really have everything here, the culture, the coaches and that bEast Texas grit,” Horace said. “I wanna set the standard for Arkansas Razorback tight ends, for the ones after me. I’m trying to put on for Crockett, Texas. I wanna leave here the best Allen Horace Jr. possible and I know I got the right people in my corner.”

You have got to love the confidence here. Young buck’s looking to set the standard for a position at Arkansas that has seen not one, but two, Mackey Award winners in D.J. Williams and Hunter Henry.

Finally, the man’s a big-time Jerry Jones fan, and he loves North Little Rock native Jerry Jones’ Razorback ties. “I’m a Cowboys fan, heavy. We (his family) are all Cowboys fans. I usually have a star in my pocket,” he told Rivals.

“My strengths are catching the ball and getting open,” Allen Horace said. “Something I need to work on is my blocking. I wasn’t a blocker, more of a receiver.”

He is the first of two tight ends the Hogs will likely try to sign in the class of 2020. For the moment, “I think all eyes right now are on Brandon Frazier, the kid out of McKinney North in Texas,” Danny West said.

He discusses Horace and Frazier more starting at 7:50 below:

And make sure to check out this post and video footage of Arkansas’ other big commitment over the weekend: