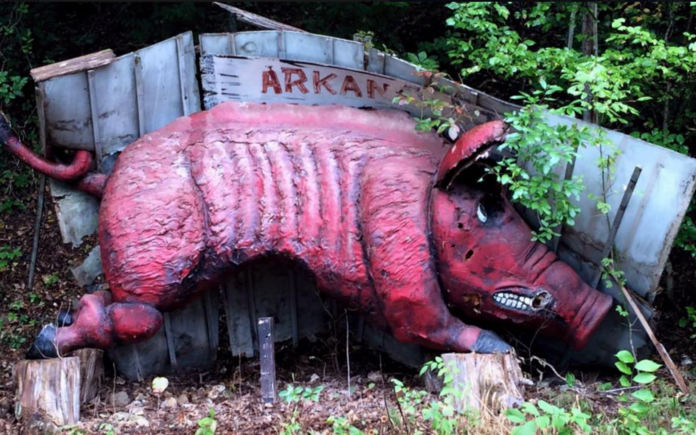 Earlier this year, my girlfriend and I drove a couple hours east of Springdale to check out an abandoned theme park that has captured the imagination of Arkansans for years.

We walked among the rusting ruins and decaying wood of a once-grand amusement park filled with water slides, a train, a theater, a family-friendly moonshine distillery and even a hatchery.

I vaguely knew these things were going on, from old clips and my own hazy memories of visiting the place in the 1980s. But what I had totally forgotten was that Dogpatch USA is home to its own very large version of “Big Red,” the University of Arkansas’ Razorback mascot.

We stumbled across it, paint peeling, ears ravaged by the elements, just about the saddest thing you’ve ever seen:

As we left the premises, we remarked how the legacy of this park just north of the Buffalo River deserves better. We wanted someone to buy it and fix it up to pay homage to the Arkansas Ozarks’ beauty.

At the time, little did we know that said person would be Johnny Morris, founder of Bass Pro Shops and the Big Cedar Lounge south of Branson.

Today, Morris announced he bought the park for $1.12 million. “We are very excited to have the opportunity to restore, preserve and share this crown jewel of Arkansas and the Ozarks so everyone can further enjoy the wonderful region we call home,” Morris said. “We’re going to take our time to restore the site, dream big and imagine the possibilities to help more families get back to nature through this historic and cherished place.”

Morris knows how much this place meant to thousands of Arkansas. Take Jeffrey Johnson, who looked at some of pics of the broken-down Hog and the ruins on Facebook: “I can’t look at anymore of these pictures. It makes me want to cry and scream to see Dogpatch like this today.”

“Some of my best memories were when we would go there. My favorite ride was the one that spun around real fast and you stuck to the wall even when the floor dropped out. I am 48 yrs old now, and have never seen a ride like that since.”

At this early stage, it’s unknown whether Morris’ site restoration will include returning “Big Red” to its former full glory. And what could his team do with it? Before pondering that question, let’s take a walk down memory lane.

Below are images of Dogpatch USA’s Razorback mascot as it spanned the decades from its opening (1968) to its closing (1993). Most pics are taken from the “Big Red” album of the Dogpatch USA Facebook page.

Here, as the Dogpatch USA Facebook archivists note, is the first location of the Razorback mascot:

By 1970, the Razorback mascot had been moved. Its backdrop became the schedule for the Hogs’ 1970 season. This was the Frank Broyles era in which the Razorbacks regularly found themselves in the top 15 nationally. That season, they opened at No. 4 but would lose the season opener in Little Rock to Jim Plunkett’s No. 10 Stanford by the score of 28-34 after Arkansas nearly pulled off a comeback for the ages.

It appears the schedule thing was short-lived. By the early 1980s, there was a sign upon which were printed the words “endeavours” and “schoolastics.”

In the last years

The “Big Red” sign said: “Herd of the Gridiron, Member of the Hog Hall of Fame, ‘an otherwise famous Arkansas Razorback. Pig sooooie!

Around the park, there were some trash receptacles in form of different characters. One was this Hog:

What should be done?

This once-great Hog icon has been utterly abandoned.

It’s unlikely the University of Arkansas has any official tie to this Razorback mascot, as it’s unlikely that the founders of the park would have contacted the U of A in the late 1960s before intellectual rights property in college athletics was such a big deal.

Going forward, though, Morris could reach out to UA athletic director Hunter Yurachek for brainstorming ways to bring this “Big Red” back to life. It’s likely that some Razorback student-athletes worked for Dogpatch USA through the decades, so collecting some of their memories and photos for showcasing — even in a virtual-only setting — would be a good way to connect heritages alongside repairing the Hog.

Another possibility is to honor Brandon Burlsworth, a native of nearby Harrison, in the new, less hokey version of Dogpatch USA. Burlsworth, one of the greatest walk ons in college football history, likely visited Dogpatch USA as a child or teen. Creating a sculpture, plaque or memorial involving his powerful story, just miles from where he grew up, should be explored.

Burlsworth, by the way, was a minor reason I attended the U of A. When I was being recruited from Little Rock Central on an academic scholarship, I and a group of other high schoolers were taken into the locker room after a football game to meet the players, I briefly spoke to Burlsworth. I remember his steady, peaceful gaze. He had a really good spirit about him, and made me feel more convinced Arkansas was the place for me.

More pics of Dogpatch USA, and a link to an amazing treasure trove of Razorback videos, below:

This, by the way, isn’t the first time somebody has bought Dogpatch USA in an attempt to revive it. Watch this documentary for more about Dogpatch USA and Marble Falls, its sister winter park:

For more Arkansas and Hogs sports history, see my book: