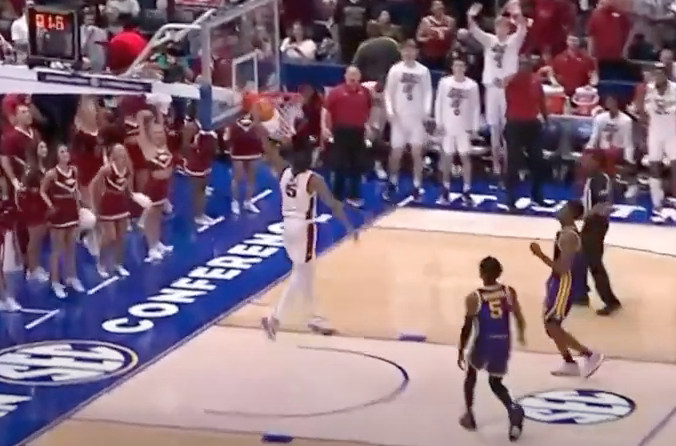 Arkansas basketball is spicy this year.

Their coach Eric Musselman is known for being one of the most animated and energetic coaches in the country. He’s a superstar on social media, which works well for Arkansas’ recruiting, apparently. Razorback Nation will take it. The wins keep piling up. The odds of another run to the Elite Eight continue to climb the way the team is playing. Arkansas’ dismantling of LSU on Friday afternoon was thorough, the type of win good teams get — not perfect, but still dominant.

JD Notae didn’t play especially well, shooting 4 of 14 from the floor. He still had six boards and 19 points. Jaylin Williams saw his double-double streak snapped as he scored just six points to go with his 11 rebounds. Only one reserve, Chris Lykes, had any noticeable impact on the game and the questions about Arkansas’ depth will be asked in advance of the NCAA Tournament.

They still won by 12 points. Over a solid, NCAA Tournament-locked team. Spicy.

The return of Au’Diese Toney was paramount. The Pittsburgh transfer, in his first and only season with the Razorbacks, has been Justin Smith Redux: a small forward who can guard four spots, knock down jumpers, grab offensive rebounds and provide energy boosts at the most important times. He scored 20 points and had 10 rebounds in the Hogs’ elimination of LSU from the SEC Tournament.

He also drew some controversy in the final seconds when he went for a dunk with the game decided and the benches already moving toward each other for a handshake. The expectation was – apparently – that he should have simply let things go.

It was oddly reminiscent of Devo Davis’ dunk in the final seconds of Arkansas’ win over then-No. 1 Auburn back in February. Auburn and its fan base didn’t care much for it. In fact, Tigers guard Wendell Green Jr. seemed to have ill intentions for Davis after the jam. The court rush put an end to any such thoughts. Auburn guard Zep Jasper, earlier this week, even said “We just feel like we were disrespected” in regards to that outcome. The Tigers had a chance for retribution on Saturday, but the SEC’s top seed was beaten by Texas A&M about half-hour before Arkansas and LSU tipped.

The displays of emotion are emblematic of a team that feels like it can beat anybody. And a fan base too, at that. The college sports outlet Big Game Sooner recently released a ranking of the nation’s most aggressive fan bases on Twitter and guess who took the crown?

Dark Side of Arkansas Basketball’s Bravado

But there is some danger in poking the bear, too. In those deep, dark corners of the internet where I dare not tread, some animus is being pointed toward the Razorbacks for their lack of sportsmanship (if one wants to call it that). Here’s but a sampling:

The reality of the situation is, however, that those kinds of actions do create emotion. If the emotion builds in an opposing team, the favor could be returned, justifiably. That’s the best-case scenario. The worst is…well, let’s not go there. At the very least, it creates some passion for an Arkansas basketball program that still needs it.

Locally, there’s no doubt it’s back. Bud Walton Arena was rocking from mid-January on. Musselman is a god among men, nearing the worship status held by football coach Sam Pittman. But nationally, there is some ignorance and at times, disrespect toward Arkansas basketball.

Before last year and a few  too-short runs in the previous years, the team hadn’t been very good for the lifetime of an entire Generation, aka: those who love those sketchy internet spaces. They’re also the ones on the opposing sidelines. “Spicy” is their way of life, fueling Arkansas’ ranking as the No. 1 most aggressive fan base.

For what’s worth, Toney’s explanation of his actions after the game made total sense.

“I mean, there’s still time on the clock,” he said. “I just played ‘til the buzzer went off.”

Even LSU coach Will Wade, not exactly known for his light-hearted and stoic disposition during games, played it down.

“You can’t let it bother us when they whip our ass three times,” he Tweeted about the dunk. “Hogs fans love to throw shade on Will Wade,” Pig Trail Nation’s Mike Irwin Tweeted. “He’s an easy target to hit. An admitted cheater via an FBI wiretap. Throws hissy fits in games. But he pretty much nailed it when asked about Toney’s dunk.”

Au’Diese Toney’s laughter during the question and a bit after his answer suggested he knew how some would react to it, anyway. But his words weren’t wrong. There’s no reason to stop playing or having fun. It’s not as though the 12-point victory was some kind of blowout. It’s the SEC Tournament, folks, and beating a team three straight times is absolutely something to celebrate (it had been 21 years since Arkansas did that last).

Arkansas had one of the wildest final two months of any team in the country, while LSU knocked the Razorbacks out of the semifinals of the same tournament last year. Toney wasn’t there, but you can bet he knew all about it from the coaches and veteran players.

So the combination of long-standing emotion, living in the moment and the brain functioning to remember what every single coach from U6 basketball on has taught – play to the whistle – is legitimate.

Still, Hogs fans need to realize that we live in a world where people do legitimate, understandable things that the opposition, of course, hates anyway (even though they shouldn’t).

Arkansas isn’t scared of backlash, though. The Hogs have the talent to back up their actions.