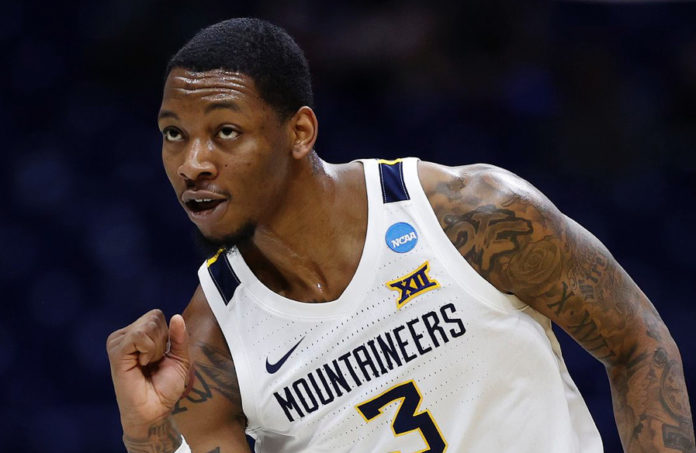 Arkansas is set to take their homecourt against West Virginia on Saturday afternoon. Though the programs have met only once before, this game will have a sense of familiarity to it thanks to the return of former Razorback, Gabe Osabuohien. The 6-7 Mountaineer senior will make his final appearance as a player in Bud Walton Arena, effectively marking the end of the Mike Anderson era while attempting to impact the current success of the Eric Musselman era with his new squad.

The Razorbacks earned their fifth consecutive SEC win against Ole Miss on Wednesday night when they beat the Rebels 64 – 55 in Oxford. The win gave Arkansas their 15th of the season and helped them climb to 3rd place in the SEC behind only Auburn and Kentucky. Next is their final regular-season matchup against a non-conference opponent this season. West Virginia and Arkansas currently reside on Joe Lunardi’s “Last Four Byes” list as bubble teams, making this matchup significant in terms of the NCAA Tournament.

West Virginia comes into this matchup at 13-6 on the season and 2-5 in the Big 12, landing at 57th in the NET Rankings. They’ve lost four consecutive matchups to teams ranked inside the Top 33 in the NET rankings. In fact, all six of their losses have come against such teams: Oklahoma (33rd), Marquette (30th), Texas (16th), Texas Tech (15th), Kansas (7th), and Baylor (3rd). This insinuates that the Mountaineers’ schedule might be related more to their strength of schedule than their actual talent level – they will still be the quality Quad 2 opponent Arkansas expected them to be from the beginning.

What to Expect When West Virginia Has the Ball

The Mountaineers are led into battle by a pair of senior guards, Taz Sherman and Sean McNeil. Sherman paces his team in points (18.5) and assists (2.6) per game. The 6-4 guard has been a high-volume 3-point shooter this season, averaging over 5.5 attempts per game and hitting roughly 34% of those attempts. He also does a substantial amount of damage from the free-throw line, hitting 78% of his 5.3 attempts from the charity stripe per game. McNeil, on the other hand, averages fewer attempts from all three levels of the court but hits his shots at a higher rate. The 6-3 guard is shooting just under 40% from 3-point range and over 80% from the free-throw line on the season while turning the ball over only once per contest.

Jalen Bridges, a sophomore, is the leading rebounder (5.5) among the Mountaineer’s usual starting five, but Gabe Osabuohien comes off the bench to ultimately lead the team with 5.7 total rebounds per game. The former Razorback is coming off a career-high 17-point performance against the Oklahoma Sooners. This game marks the second time this season that Osabuuhien has scored double-digits and the eighth time he has tallied at least two steals in a game. Scoring outbursts like this one have led to the affectionate nickname, “Gabe Osa-scorin'” from Mountaineer fans when the senior forward contributes unexpected point totals.

“He played harder than everybody else played, and to his credit, he’s worked on his game, head coach Bob Huggins said in an exclusive interview for this weekend’s Bob Huggins Show. “He couldn’t drive it to the goal before. I mean, if he did drive it at the goal, he may hit it underneath the backboard or throw it behind the backboard. He’s come a long, long way. He couldn’t hit a free throw. It’s almost like if it even hit the rim everybody was excited. Now he’s become not a great free throw shooter, but an above-average free throw shooter.”

Bridges and Osabuohien, both standing at 6-7, will be a challenging matchup for the new-found “tall ball” lineup that Razorback head coach Eric Musselman has adopted that includes four players standing 6-6 or taller alongside SEC leading scorer JD Notae.

As a team, West Virginia is shooting only 31% from long range on the season. Though it’s still a stretch to label the Hogs as a 3-point shooting team, they have turned a corner when it comes to defending the 3-point line. In their last five contests, Arkansas has allowed its opponents to shoot only a total of 26 for 102 (25.5%) from long range, not allowing any single opponent to shoot better than 31%. This has become a major part of the Razorbacks’ current winning streak and projects to be a telling factor in their upcoming matchup against the Mountaineers.

Jaylin Williams has become a certified star in the SEC as of late. In his last three games, the 6-10 forward is averaging 17.0 points, 9.3 rebounds, 2.7 assists, 3.0 steals, and 2.0 steals per game while shooting 52% from the field, 50% from 3-point range, and 89% from the free-throw line. The numbers speak for themselves, but his ability to make the right play at the right time has been crucial to the Razorbacks’ recent success.

Williams has become a near-perfect centerpiece to Arkansas’ game plan on both sides of the ball, though his foundation of being an unselfish player who does a lot of the dirty work has not left him. Williams is still an exceptional screener, passer, and charge-taker despite becoming more of a scoring threat lately. His ability to draw charges is familiar to Osabouhien, who leads the Mountaineers in deflections with 131 and charges drawn with 18 this season.

Williams’ backcourt counterpart, JD Notae, found some of his rhythm back from long range against the Rebels, shooting 40% from distance after shooting 2-13 (15%) in his previous two games. The 6-1 guard put up 25 points in 38 minutes against Ole Miss and is now averaging 19.4 points, 4.2 rebounds, 4.0 assists, and 1.4 steals per game during the Razorbacks’ current win streak. He has become the clear focal point of the offensive game plan, operating alongside Williams to pour in just enough scoring to allow the Razorbacks’ tenacious defense to do the dirty work and ultimately win ball games.

In recent games, the Razorbacks have accumulated wins under varying circumstances including hitting zero 3-pointers against South Carolina, JD Notae fouling out before overtime against Texas A&M, and attempting only 12 free throws against Ole Miss despite their nation-leading 24 attempts per game prior to the win over the Rebels. Similar to last year’s team, Eric Musselman’s Hogs continue to find ways to win in unfavorable circumstances – a dangerous trait for a college team with tournament hopes.

Arkansas vs Ole Miss: What to Watch For

There’s no question about it: the headline of this Arkansas basketball game is the return of a once-beloved forward, Gabe Osabuohien, who played two seasons under Mike Anderson before getting dismissed for an undisclosed reason a few months into the Eric Musselman era. “We have set a level of expectations for our student-athletes on and off the court,” Musselman said in August, 2019. “After discussions with Gabe, it was decided that it would be best to part ways. We thank him for his time at Arkansas and wish him well.”

The move has worked out for both parties. Osabouhien is having the best season of his collegiate career, averaging a career-high in points (5.1), rebounds (5.7), steals (1.4), and field goal percentage (.486) while playing roughly 18 minutes per game. The 6-7 forward played 54 games in a Razorback uniform, averaging 2.4 points, 3.7 rebounds, 1.5 assists, and 1.0 steals per game while shooting 34% from the field and 43% from the free-throw line.

Osabuohien will likely be the last player linked to Mike Anderson’s Razorback days to visit Bud Walton Arena now that Ethan Henderson’s Aggies have already made their trip to Fayetteville. With both teams sitting on the tournament bubble, Osabuohien has a chance to make a lasting impact on the Eric Musselman era of Arkansas basketball should he and the Mountaineers deliver a devastating blow to the Razorbacks tournament hopes this Saturday.

Fortunately for coach Musselman’s squad, Osabuohien’s Achilles’ heel plays into one of Arkansas’s biggest strengths: committing too many fouls. “Osabuohien has fouled out twice this season. He’s reached four fouls in an additional three contests and registered three six time,” according to WTRF.com’s Anjelica Trinone. “Coincidently, his weakness is his former team’s strength, as Arkansas leads the nation in free throws made and is second in free throws attempted.”

The last time Bob Huggins coached against the Razorbacks in Fayetteville, he might have had a hand in ending an era himself. With President Bill Clinton in attendance, Huggins’ Bearcats of Cincinnati defeated the Hogs by 15 points on their home court in December of 1995. Though Richardson coached Arkansas for six more seasons, the Hogs didn’t advance to the third round of the NCAA Tournament again until Eric Musselman led the 2021 squad to the Elite Eight.

ESPN’s Basketball Power Index gives the Hogs a 74% chance of beating the Mountaineers in Fayetteville on Saturday. The Hogs, which are favored in the game according to sportsbettingday.com, lead the all-time matchup 1-0. The only other meeting came on a neutral court in the Old Spice Classic in Orlando, Florida back in 2006.

The stifling Razorback defense will strike again, holding their opponent under 60 points for the fifth time in six games. JD Notae and company will once again find their rhythm from long range thanks to a rowdy Razorback crowd fueling the adrenaline and momentum in the Hogs’ favor. Jaylin Williams will have another stand-out performance, posting his fifth double-double of the season as Arkansas earns its sixth straight victory and another resume-boosting win.

How to watch Arkansas vs West Virginia