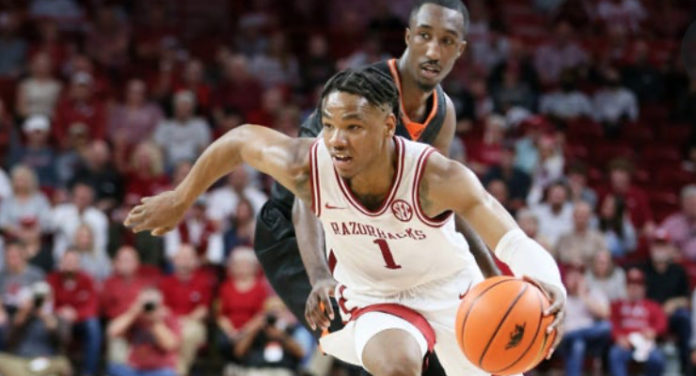 Arkansas basketball looks to get back on track in their SEC home opener Tuesday, January 4th against Vanderbilt. The Razorbacks dropped their first SEC matchup of the season last week on the road against Mississippi State, making it three losses in four games. Two of those losses came by double digits against Power Five opponents – Oklahoma and Mississippi State.

A small consolation for Arkansas basketball fans, however, is that the loss to Mississippi State came without Arkansas’s leading scorer, JD Notae, who averages 18 points, nearly 5 rebounds and just over 3 assists per game. His absence, which was reported as a non-disclosed illness, was clearly felt.

It’s possible Notae will return to the lineup against Vanderbilt based on what Arkansas basketball coach Eric Musselman said Monday: “He’s practiced a little bit,” Musselman said. “Probably a game-time decision based on his wind and not being able to fully practice. I would say we’ll see how shoot around goes tomorrow and see how he’s feeling, as well.”

If Notae does return, he will almost certainly make a big difference in the game.

Vanderbilt comes into this contest at 8-4 with notable wins over Pitt, Winthrop, and BYU who rank 180th, 177th, and 27th currently in the KenPom rankings. Similar to Arkansas, the Commodores started their season strong winning four of their first five before losing three in a row. Since then, they’ve put together a three-game win streak including a two-point victory over the aforementioned BYU. Though not considered favorites to win the SEC, Vanderbilt has proven to be no pushover thus far this season.

What to Expect When Vanderbilt Has the Ball

Vanderbilt’s offense revolves around junior guard, Scotty Pippen Jr, son of UCA great and NBA Hall of Famer Scottie Pippen. He has a usage of 32%, meaning Vanderbilt plays through Pippen Jr. 32% of the time when he’s on the court. For reference, Arkansas’s highest usage player by far – JD Notae – has a usage of 27% this season. Pippen Jr. averages 18.1 points, 3.8 rebounds, and 2.5 assists per game through 12 games played this season.

Despite boasting a career-high 2-point percentage, Pippen’s counting stats are noticeably down from last season when he averaged 20.8 points and 4.9 assists per game. This can be partially attributed to his relatively poor 31% 3-point shooting, down from his career average of 36% from distance over his first two seasons with the Commodores. Scottie Pippen Jr.’s dip in assist numbers can perhaps be attributed to Vanderbilt’s poor 3-point shooting as a team. So far this season, they’re hitting only 29.5% of their long-range attempts, second worse in the SEC ahead of only Missouri’s 24.3% shooting. Even the Razorbacks, with their poor shooting start to the season, are hitting at a 30.4% clip on the season.

The Hogs will have to close out defensive possessions by rebounding as a team because the Commodores boast three different players averaging at least 4.5 rebounds per game, led by 6-5 guard Jordan Wright. Wright is also the team’s second-leading scorer and is a threat from long range, hitting 30.4% of his 3.8 attempts per game. Quentin Millora-Brown is another big threat on the glass, figuratively and literally. The senior is listed at 6-10 and is the tallest player with any meaningful minutes so far this season. In roughly 23 minutes per game, he’s averaging 5.9 rebounds per game, including nearly three offensive rebounds per game.

The Arkansas basketball team could sure use a heavy injection of JD Notate’s one-on-one scoring abilities. The question is, if he plays vs Vanderbilt, whether he can tap into hot shooting more often than not, given he’s only shot 42% from the field so far.

Jaxson Robinson, meanwhile, will likely remain a staple in the Razorbacks’ offensive game plan thanks to his stellar 3-point shooting. Over his last three games, Robinson has bumped his minutes per game average up to 20 minutes per contest compared to only nine minutes per game in his previous five appearances this season. In those last three contests, Robinson is shooting roughly 47% from distance and scoring almost 10 points per game. His ability to stretch the court against a Vanderbilt defense ranked 115th in the nation in opponent 3P% will be a major key for the Hogs to come away with a win.

Notae’s ability to handle the basketball and score in late-game situations will be a welcome sight for a struggling Razorback team. In their last outing against Mississippi State, the Hogs coughed up 17 total team turnovers, their largest total of the season. Although Notae hasn’t been the most efficient scorer, he’s consistently been the Hogs’ main ball handler for most of the possessions that he’s on the court.

While he ranks 4th on the team in turnovers per 40 minutes with 2.8, his absence forced other guards into situations they’re not used to, leading to a higher turnover rate for the team as a whole. His presence should make big difference for the offense.

Arkansas vs Vanderbilt: What to Watch For

Arkansas has consistently struggled on the defensive side of the ball, especially when trying to contain high-IQ guards like those playing for Hofstra, Oklahoma, and Mississippi State. Scotty Pippen Jr. has been a challenge for any guard he lines up against, and it will be no different for JD Notae, Devo Davis, and the other Razorback guards as they pester him for 40 minutes on Tuesday night.

Last season, the Hogs held Pippen Jr. at or below his averages in terms of efficiency and counting stats during their 21-point victory on the road. He shot right at his season average 43% from the field while missing both of his 3-point attempts and only got to the free-throw line four times compared to his season average of eight times. The then-sophomore guard scored 15 points and dished out 5 assists as his Commodores fell to the Hogs. It’s worth noting that since-departed Arkansas basketball guard Jalen Tate was the Hogs’ best perimeter defender last year, while JD Notae and Devo Davis both came off the bench. They combined for 35 total minutes and helped guard Pippen Jr.

Arkansas’s ability to bounce back from yet another loss will rely heavily on their ability to take care of the ball on one end and force turnovers on the other. The winner of the turnover battle could very well determine the game’s victor.

While the Hogs are not likely to overcome all of their struggles overnight, they do find their rhythm offensively thanks in large part to their return to Bud Walton Arena. The defense struggles, as might be the case for several games this season, but Arkansas’s offensive firepower is enough to overcome Pippen Jr. and his Commodores at home.