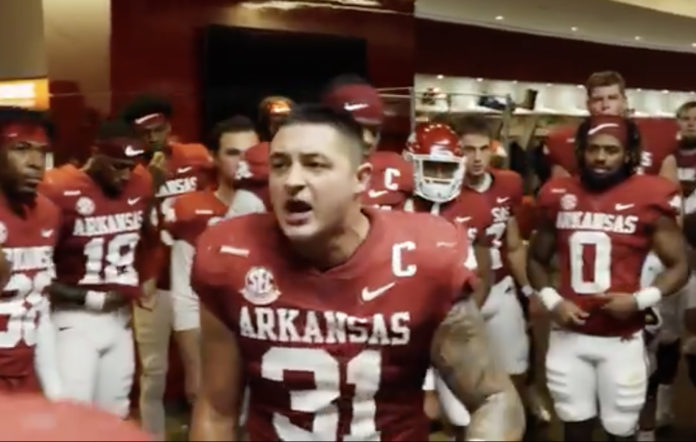 On Saturday the No. 16 Arkansas football team will look to accomplish something the program hasn’t since 2003: start a season with a 4-0 record.

Standing in the way of that coveted fourth victory is No. 7 Texas A&M, a former Southwest Conference rival turned SEC West enemy.

The Aggies have dominated the Hogs since joining the division in 2012—they have earned nine straight victories, including a 42-31 win in College Station last year.

But Arkansas (3-0) enters the 78th installment of the Southwest Classic with more momentum after stunning No. 15 Texas 40-21 in Week 2 and thumping Georgia Southern 45-10 in its final tune-up before A&M, which eked out an unimpressive 10-7 win at Colorado in Week 2 after losing its starting redshirt freshman quarterback Haynes King in the first quarter.

As much as Arkansas football fans might be giddy about the mere thought of the victory parties they would throw in the aftermath of a victory over their longtime rival, a win over Texas A&M (3-0) would be mean a lot in the long term.

What would a win mean for Sam Pittman?

There may not be a single person on either side of the Arkansas-Texas A&M rivalry with more to gain from a victory than Pittman.

The seeds the Razorbacks’ second-year head coach planted last season began to sprout toward the end of the year; even though the team lost its last four games, there were signs of a tougher and more talented team as the season wore on.

The entire Arkansas football operation took another step under Pittman this fall when the team manhandled the Longhorns in its first true test of the season. With a victory Saturday, Pittman can already surpass last year’s win total by starting 4-0 — an achievement Arkansas hasn’t experienced since the Houston Nutt era.

Regardless of Saturday’s outcome, Pittman has already brought the program back to heights it hadn’t reached in years. The win over Texas catapulted Arkansas into the Top 25 rankings for the first time since 2016 — and folks around the country took notice.

A win over Jimbo Fisher, who is one of just five active coaches with a national championship title on his resume, would give Pittman another layer of credibility as he looks to continue to rebuild the program.

Arkansas football victory could lead to a recruiting boom

Slowly but surely, the Razorbacks have seen more and more recruits choose Arkansas over opposing schools since Pittman’s hiring. It can’t be overstated how much it would help the coach to add a top-10 victory over an SEC West foe to his recruiting pitch.

Especially if that victory were to come against A&M, a heated rival located in a hotbed for high school talent.

Arkansas is already actively pursuing multiple recruits from Texas, including 3-star wideout Phaizon Wilson, a Lancaster, Texas, native reportedly “warm” on the Hogs and Alabama according to his 247Sports recruiting profile.

After watching the Aggies dominate the rivalry series between Arkansas and Texas A&M for the past decade, the current crop of high school recruits hasn’t even seen what sort of excitement surrounds the Razorbacks when they are ranked in the top 10.

Just as Pittman and Arkansas have opened the eyes of college football fans throughout the country during the past three weeks, a victory Saturday would catch the attention of recruits and prove the Hogs are among that second tier of teams in the SEC West, sitting a notch below the seemingly impenetrable Crimson Tide.

Arkansas vs Texas A&M: What to expect

It would also prove Pittman has the coaching chops to take down one of the few active coaches with a national championship ring … And that’s nothing to sneeze at.

Would it come as a surprise if the rivals went back and forth and lit up Jerry World’s scoreboard like a SXSW exhibit?

Arkansas is averaging 41 points per game and Texas A&M is at 28.3—though the Aggies’ total is skewed a bit when the mid-game loss of King against Colorado is accounted for. King’s backup, sophomore Zach Calzada, looked much improved last week, as he completed 19 of 275 passes for three scores in a 34-0 victory over New Mexico.

However, Calzada was intercepted and sacked three times against a Lobos defense with far less speed, talent and toughness than he’ll face Saturday. That outing also came at home, so conditions were ideal for the offense.

Saturday’s atmosphere will also be much tougher for the A&M signal-caller. Sure, it’ll be a split crowd at AT&T Stadium in Arlington, but the Razorbacks faithful who do make the trek to Jerry World will undoubtedly create a tough atmosphere for Calzada in his first SEC start.

On the flip side, the moment shouldn’t be too much for KJ Jefferson and Arkansas’ offense following the Texas win. While A&M’s offense is still trying to find its mojo, the Hogs have an identity with Jefferson providing the unit with a quarterback capable of doing damage with his legs.

It’s not as though A&M has been abysmal against the run this year, though Kent State QB Dustin Crum ran for 61 yards on the Aggies in their season opener, and Colorado’s Brendon Lewis went for 76 a week later.

Texas A&M hasn’t seen a quarterback like Jefferson yet, and it’s apparent the Aggies recognize it.

“Just because you hit him doesn’t mean he goes down,” Fisher said.

“He’s got a lot of Cam Newton about him,” added A&M safety Leon O’Neal.

While it’s too early to start printing the “Jefferson For Heisman” T-shirts, it’s not premature to declare Arkansas has the quarterback edge Saturday. If the first few weeks are any indication, Jefferson’s impact leading the offense could be the recipe to leading Arkansas to another upset.

And if that happens, the combination of a win on Saturday afternoon and all the wins down the line because of that will give Arkansas football fans plenty to celebrate.