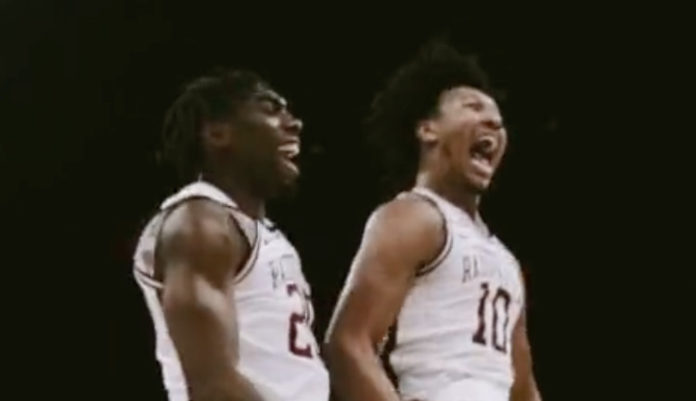 The No. 13 Hogs are off to an impressive 5-0 start after winning the Hall of Fame Classic. On Sunday afternoon Arkansas will look to continue their winning ways against the Penn Quakers in Bud Walton Arena. In a game that will heavily favor the Razorbacks there will still be plenty to watch for as they match up with a respectable Ivy League opponent from a 281-year-old institute that markets itself as “America’s first university.”

The University of Pennsylvania has come out slow this season after not playing in the 2020-2021 season due to the COVID-19 pandemic. The Ivy league sat out the entirety of last season but have since rejoined the action. Perhaps due to this break in action Pennsylvania is still looking to shake the rust off. Unfortunately for the Quakers, they will face a very talented Arkansas roster in Fayetteville that is coming off winning the four-team Hall of Fame Classic tournament in Kansas City.

It’s the first title of what Razorback fans hope will be a few this season and postseason.

When Penn Has the Ball

Despite a shaky start, the Quakers offense will still pose a threat on Sunday. Led by sophomore guard Jordan Dingle’s 19 points per game this Pennsylvania offense will look to strike from the perimeter. The Quakers shoot the deep ball at an impressive 37.7% clip good for 66th in the country. This has been an area of attention for Arkansas coach Eric Musselman whose team has struggled to defend the 3-point shot, allowing more baskets from the outside than 290 division 1 teams.

The Quakers have an interesting composition of size in their main lineups. The average height of their starting roster will be the tallest the Razorbacks have faced this year, but Pennsylvania does not boast any player over 6’9 who plays significant minutes. In contrast to their small forwards they do possess lengthy guards ranging from 6’1 to 6’6. Positionally, the size of this roster will be similar to the Baylor Bears team that knocked the Hogs out of the NCAA tournament last season, but a lot less athletic, physically strong and experienced.

That said, expect the Hogs athleticism to overwhelm the Quakers offense. Penn will look to attack from the outside and spread the Arkansas defense thin with swift ball movement. As always Arkansas will try to jump at this ball movement and force live ball turnovers. Overall, Pennsylvania will have to knock down perimeter shots to keep pace in this one.

This matchup is extremely favorable for Arkansas offensively. The 295th ranked Penn defense has been poor defending lesser teams all season and will struggle to cover the multitude of weapons that Arkansas possesses. Expect the Hogs to attack from all levels particularly through the efforts of J.D. Notae, Chris Lykes and Jaylin Williams. It would be no surprise to see Au’Diese Toney dominate the offensive boards against a small Quaker front court that Razorbacks will likely out rebound the game.

Fans who make it to Bud Walton Arena should have a lot to cheer for this Sunday as the Hogs look to score the ball at a high rate. It will be interesting to see how Eric Musselman and his staff manage their front court. Their decisions to this point have been effective but it is hard to detect the rhyme and reason behind their tactics. Will we see Connor Vanover for 2 minutes or 20 minutes on Sunday? That answer is unclear, but should provide further insight into this ongoing investigation.

Arkansas Basketball Things To Watch For

Similar to most of the non-conference matchups, the Hogs will still need to put in the work necessary to earn a comfortable victory. This is arguably the Razrbacks easiest matchup to date and will hopefully answer lingering questions for both the Razorback staff and fan base. Watch for lineups and rotations to be dictated by the competitiveness of the matchup. If the Hogs break away early it could be a great opportunity for guards KK Robinson and Jaxon Robinson to show Musselman what they can do.

The Razorbacks will enter Bud Walton Arena as heavy favorites in what should be a high scoring performance for the Hogs. Kenpom sees an easy victory with Arkansas winning 84-64 while Haslametrics predicts a similar result with the Hogs dominating 86-66. Expect Arkansas to be aggressive offensively from the tip. The Quakers will likely struggle on offense but have a chance to make this one interesting if they make 3’s at the rate they have so far this season. Overall, Arkansas will have an advantage in almost every aspect of this game and should win comfortably at home.

How to Watch Arkansas vs Penn