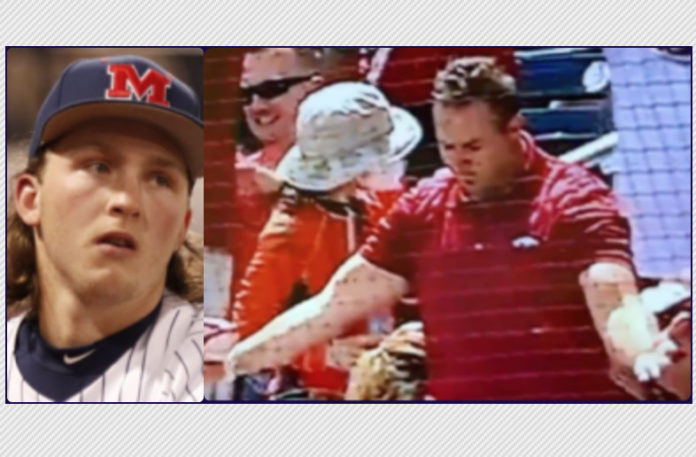 For game two of the College World Series, the Hogs have a familiar face lurking in the night. The Ole Miss Rebels (38-22, 14-16) are streaking and have turned their season around to become legitimate title contenders.

The Rebels have a strong argument for being the hottest team in the nation, going 6-0 in the NCAA Tournament and outscoring their opponents 51-12. Ole Miss has a tournament-best 1.83 ERA going into Monday.

In a similar situation, Arkansas was faltering at the end of the year and had the fans split. Half were essentially saying it was over and the Razorbacks couldn’t get it done. But the other half were your cup-half-full types, saying “It’s fine, there’s time to turn it around.”

As the latter was proven right, former Arkansas designated hitter Matt Goodheart told the rest of the Arkansas baseball faithful “I told you so.”

As the Hogs have had a similar spark as the Rebels in the NCAA Tournament, going 6-1 so far, the SEC rematch with the Rebels looks to be a hotly contested, intense matchup. This game, which will air at 6 pm Monday on ESPN, has major implications for the national championship and should capture the attention of all college baseball fans.

The entire Arkansas lineup is feeling good after the record-setting 21-hit performance in the 17-2 victory over 2-seed Stanford.

The two bats who were struggling in the lineup, junior second baseman Robert Moore and junior left fielder Zack Gregory, each collected a pair of hits Saturday and Moore drew three walks from the Cardinal pitching.

The hot bats of Arkansas will have to battle the emerging star of freshman left-hander Hunter Elliott. In two starts this tournament, he has allowed one run over 12.1 innings with 18 strikeouts, including a dazzling performance at the Super Regionals with 7.1 innings of shutout baseball and 10 strikeouts.

The Razorbacks faced Elliott when the teams played at the end of April, scoring three runs in six innings but striking out eight times. The Razorbacks won that game on the walk off three-run home run by freshman designated hitter Kendall Diggs.

Elliott learned a lesson that has stuck with him since. That lesson was not to tune the crowd out, but instead try to keep the crowd out of it because Arkansas has such a good fan base and they feed off the energy of the crowd. Learning that lesson may have made the difference in his season.

“I would say rather than trying to tune it out where they don’t do it as much would be better,” Elliott said. “If you don’t allow them, they won’t do it as much. I figured that out. The less home runs you give up, the less runs, the less ‘woo pigs’… They can take advantage of mistakes like they did all weekend. They can swing it, good approach, but [they are] pitchable.”

As for that regular season Arkansas vs Ole Miss series, Arkansas took two of three after dropping game one. The decisive game three came down to the final out, as the Rebels’ best hitter, senior first baseman Tim Elko, left the bases loaded with two outs in the ninth.

This time around, it is win to advance. The winners bracket provides a much easier path to the finals with the loser of Monday night’s contest needing to win three days in a row to survive.

Hitting in the cleanup spot is senior left fielder Kevin Graham. He leads the team with a .339 average to go with 11 round-trippers and 47 RBIs. He is 8-26 (.308) in the tournament with a home run and six runs batted in and coming off a three-hit game including a dinger. Since the Arkansas series, he is batting .431 with five home runs and 19 RBIs over 17 games.

How to Watch Arkansas vs Ole Miss

No wonder Razorback radio play-by-play man Phil Elson is so keen to show off what he’ll be wiping his feet off on during the broadcast tonight:

Arkansas and Ole Miss is going to be an intense game between division rivals. It’s one of the best rivalries in college baseball and now it is in Omaha. The intensity will be further ramped up with these teams having two of the biggest and rowdiest fan bases that will pack the house more than the other teams combined and certainly turn Charles Scwab Field into a madhouse.

“What I remember most is just their fan base,” said Rebel Peyton Chatagnier when looking back at the series in Fayetteville earlier this year “Their fan base is really (good). They get loud, they get rowdy and makes the atmosphere really fun. I think our fan base is going to be at this game just as much as theirs. So I think it’s going to be a really loud and rowdy, intense, fun game.”

The Hogs have experience with the starting pitcher and had relative success against him already. The Razorbacks will throw junior left-hander Zack Morris. He enters Monday with a 6-0 record and 1.89 ERA. He started the decisive game of the Stillwater Regional and went 3.1 scoreless innings. He has not allowed a run in four of his past five outings, pitching 9.1 innings in those appearances.

Morris and Elliott will probably face off in a riveting pitcher’s duel fueled with animosity and fire with the stakes being so high. The first few innings will likely not see many runs.

Razorbacks will pull away late and punch their ticket to the semifinals. The back end of the Arkansas bullpen is really strong, especially with freshman lefty Hagen Smith clicking as a closer and freshman righty Brady Tygart always there to close out a game, like he did when Arkansas faced Elliott in April.

Now, I invite you to glory in the most intense, borderline spiritual Hog call of the year:

Then learn more about Ole Miss and Arkansas fans likely spending more than $25,000 on Jell-O shots: