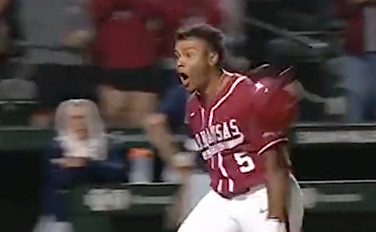 “We needed to win, big time,” Arkansas baseball Dave Van Horn added. “That was a huge win for us tonight, just to win, just to feel good about it. The way we won probably made it even better.”

Saturday night’s win evened the series at one game apiece. Arkansas now goes for its first home series win against Ole Miss since 2015. Game 3 ESPN at noon with Tom Hart (play-by-play) and Kyle Peterson (analyst) on the call.

With one out and two runners on in the bottom of the ninth, Diggs hammered a 3-2 pitch from Ole Miss reliever Jack Dougherty over the wall in right for the walk-off win. The Olathe, Kansas native, who was starting his first SEC game since March 27 at Missouri, finished his night with a team-leading three RBI.

The blast was all the more impressive because of Arkansas’ recent struggles with runners in scoring position. As Hawgbeat’s Andrew Hutchinson put it, “despite the fact that Arkansas was just 1 for 19 with runners in scoring position and 5 for 37 with any runners on base since the midweek win over UCA, the way those plate appearances played out gave Van Horn confidence his team was about to end it.”

Boy did it ever. Diggs proved he could step up at the perfect time despite having gone 0-for-3 earlier in the game. His humdinger was the Arkansas baseball program’s first walk-off home run against an SEC opponent since James McCann’s famous three-run home run to beat LSU 4-3 on April 9, 2011.

Indeed, all six of Arkansas’ runs on Saturday night came via the home run. Brady Slavens hit his 11th of the season in the bottom of the first, giving the Hogs an early 1-0 advantage.

Trailing by a run in the bottom of the fifth, Braydon Webb kept pace with Slavens by popping his 11th long ball of the year. Webb’s two-run shot gave Arkansas its second lead of the night, which would hold up until the eighth inning.

After Smith had departed, Ole Miss loaded the bases with nobody out in the top half of the eighth. The Rebels would only scratch out one run, however, as Brady Tygart (2.0 IP, 2 SO) emerged from the bullpen in relief of Evan Taylor (1.0 IP, 1 SO) to silence the threat.

Tied at three entering the bottom of the ninth, Jace Bohrofen’s single and Webb’s walk brought Diggs to the plate with one out. The true freshman did not disappoint, delivering the game-winning dinger to end the night (Razorback Communications).

Sophomore pitcher Jaxon Wiggins struggled in his last time out, allowing five runs and only recording one out. That has fit the theme with Arkansas, struggling to pitch on the road. He has a 3.19 ERA at home over 31 innings with Arkansas going 5-1 in those starts.

The No. 5 Arkansas Razorbacks (32-10, 12-7) stumbled out of the gates in its series opener vs the Ole Miss Rebels (24-17, 7-12) on Friday night as one of the SEC’s best baseball rivalries adds another chapter under a brighter national spotlight than usual.

Ole Miss was ranked No.1 by D1 Baseball just five weeks ago, but they have fallen completely out of the major polls. The Rebels had entered the series on fumes, losing their last three weekend series to Alabama, South Carolina and Mississippi State.

But, man, did they get it going again in Friday’s 4-2 win in Fayetteville.

Razorback starter Connor Noland battled adversity on the mound all night. The veteran right-handed allowed four runs on 11 base hits and four walks but still managed to turn in a career-long outing of eight innings in the losing effort.

After exchanging zeroes over the first three innings, Ole Miss opened the scoring with a run in the top of the fourth and three more in the top of the fifth. All three of the Rebels’ runs in the fifth came with two outs as Arkansas could not find a way to escape the inning unharmed.

Ole Miss’ four-run lead held strong until the eighth. Braydon Webb’s two-run homer with no outs ended Rebel starter Dylan DeLucia’s night, but only after he had struck out nine over seven innings of two-run ball.

Arkansas could not capitalize on its newfound momentum as the next three hitters went down in order against Ole Miss reliever Brandon Johnson to end the inning. Razorback left-hander Evan Taylor emerged in relief of Noland and worked a 1-2-3 top of the ninth with two strikeouts to keep the Hogs within two headed into the bottom half of the inning.

Johnson remained unhittable, however, setting down the final three Arkansas batters. He retired all six he faced in relief of DeLucia to secure his fifth save of the season and preserve the Rebels’ 4-2 win.

Background for Arkansas vs Ole Miss

The below was published going into the series

Arkansas, meanwhile, didn’t have the best go of it last time weekend during a tough series loss at Texas A&M, where the game three comeback attempt just fell short. The Razorbacks miraculously made it a one run game in the eighth inning after trailing 9-1 after four innings. In the eighth inning, they had runners on second and third, no outs but ended the inning with three strikeouts and lost by one.

Even though this Arkansas vs Ole Miss series won’t pack the allure of a top-5 matchup, the respect that both teams generate nationally is seen in the fact it will feature the only SEC baseball game that will air on ESPN this season. Game 3 was originally scheduled to broadcast on ESPN2 at 1 p.m., but a few weeks ago ESPN nabbed the broadcast instead and moved it up to noon.

Originally, 10 SEC baseball games were scheduled to broadcast on ESPN2 while eight games were slated for ESPNU.

The Razorbacks boast an 8-1 record at home in conference play with the one loss coming in 12 innings to Mississippi State. In game three against Mississippi State, the Razorbacks loaded the bases with one out in the ninth and could not push across the winning run. They also had a runner in scoring position with one out in the eighth and 11th innings but could not bring them home.

Overall, it has still been a successful season to this point, holding that 8-1 record at home in the SEC and still being ranked in the top-5. The lineup has been dangerous this year even though home run numbers are down from last year.

Despite all of the success Arkansas has had, it has been a rough go for junior second baseman Robert Moore. He is batting just .190 in conference play and .153 after his 3-4 effort in the conference opener against Kentucky.

Senior outfielder Braydon Webb has also been struggling in SEC play as of late. After his monster stretch of offense, Webb is just 3-28 over the past seven conference games. He has also gone eight games without a home run. Junior left fielder Zack Gregory is also struggling a bit, collecting just two hits in his last 12 at-bats.

Not everything is bad news with the Razorback offense. Senior right fielder Chris Lanzilli is also currently on a eight-game hitting streak and a couple players had good weekends against Texas A&M. Senior shortstop Jalen Battles was 4-11 with a monster 2-run blast while freshman first baseman Peyton Stovall was 5-10 with a couple of RBIs.

Sophomore third baseman Cayden Wallace had a good performance Sunday, going 3-5 with a home run and two RBIs. He continues to lead the offense, hitting .322 with 16 RBIs over the past 22 games. Senior catcher Michael Turner has been hitting well lately. Before a rough game Tuesday, he had a seven-game hit streak where he was batting .357.

The hottest hitter on the team is senior designated hitter Brady Slavens. In the 17 games since his 0-17 stretch, he is hitting .385 with seven home runs and 27 RBIs. He has been feeling the home run swing lately, hitting six home runs and 16 RBIs in the last 10 games.

The Rebels started the year hot, averaging 11.1 runs and scoring at least eight over the first nine games of the season. Going into that Tennessee series, Ole Miss was 16-4, ranked No. 1 and scoring an average 9.8 runs per game.

Over the past 16 games against SEC teams since the start of that series, Ole Miss has only scored 4.9 runs per game, gone 5-11 and dropped out of the rankings.

Before playing Tennessee, Senior third baseman Justin Bench and sophomore center fielder Tj McCants were both hitting .357. Since the start of that series, Bench is hitting .247 and McCants is hitting .173, including an 0-11 against the Volunteers. Another bat that has dropped off significantly since then is junior second baseman Peyton Chatagnier, who is hitting .149 since the start of the Tennessee series, including an 0-12 against them.