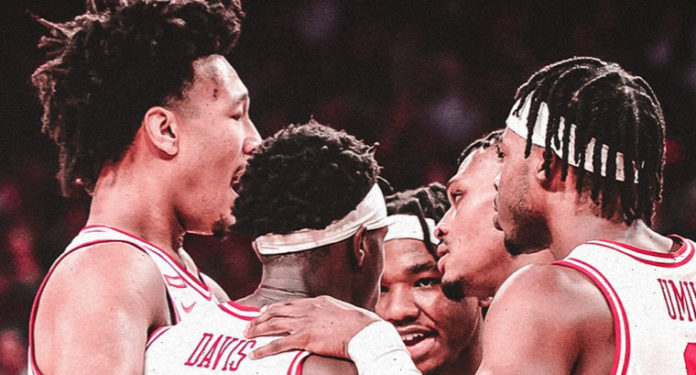 The Arkansas basketball program looks to finish its 3-game home stand in Bud Walton Arena undefeated on Wednesday night against Northern Iowa. The Hogs took care of business in their first two games of the season against Mercer and Gardner-Webb. The same cannot be said for Northern Iowa. The Panthers suffered back-to-back home losses against Nicholls State and Vermont. Not the kind of start the program is used to after making the NCAA Tournament four times in the last 15 years and winning the Missouri Valley Conference title two years ago.

Still, Arkansas basketball coach Eric Musselman insisted that they are a tough opponent in his pregame press conference. Musselman described Northern Iowa as “very well coached. They cut extremely hard. They are a NCAA Tournament caliber team”. Indeed, when it comes to the top three basketball program in Iowa and those most likely to make the NCAA Tournament, Northern Iowa should rank only behind Iowa and Iowa State according to Bet on Sports in Iowa. If Musselman’s energy is matched by his players, it seems unlikely the Hogs will overlook a Northern Iowa team that got off to a rough start.

Despite a shaky start, the Panthers still maintain solid metrics on both ends of the floor. The veteran team boasts a physical offense that has made it to the free throw line at the 11th-highest rate in the country. This well-coached Panthers squad leverages their chemistry in effective half court sets. Expect head coach Ben Jacobson to rely on a combination pick and roll and dribble handoffs to create open looks for a team that has struggled shooting the ball this season ranking 343rd in effective field goal percentage.

“They’re one of the oldest, most veteran teams that we will play all season long,” Eric Musselman said. “They’re smart, they cut hard, they cut from the corners hard, they run a lot of elbow (dribble-handoff) actions. We’re going to have to guard that.”

Northern Iowa will have their work cut out for them against the 18th-ranked defense in the country. The Razorbacks have been fantastic at limiting second chances, only giving up 9 offensive rebounds between their first two games. The Panthers will look to run their offense through junior forward Austin Phyfe and junior guard AJ Green.

The pair of juniors are averaging roughly 10 points a game this year, and will need to improve on that if they want a chance to keep up with a more talented Arkansas basketball team. Look for the Hogs to continue to pressure guards in the half court and work to force live ball turnovers and score in transition.

AJ Green, especially, is a crafty, gifted scorer who won MVC Player of the Year honors as a sophomore two years ago before missing most of last season with a hip injury. He continues a two-game streak of Arkansas playing opposing players with the same names as present and past Razorbacks.

AJ Green is the name of a freshman tailback for the football Razorbacks who in high school was compared by Otis Kirk to a mix between Felix Jones and Darren McFadden. On top of that, last Saturday the basketball Hogs squared off against a Gardner-Webb featuring a former four-star big man named Kareem Reid.

He shares a name with a star point guard guard of the Razorbacks in the late 1990s. That Kareem Reid, one of 14 McDonald’s All-Americans to ever play for the Razorbacks, finished ahead of Lee Mayberry as Arkansas basketball’s all-time assist leader.

(He’s also the flashiest point guard to ever play for the Hogs, as you can see here. Chris Lykes has a shot at rivaling him in this department, though.)

In back to back games the Hogs have come out relatively slow on offense before heating up to finish with 74 and 86 points. Even with a pair of slow starts the Hogs are ranked 23rd nationally in offensive efficiency. Led by senior guard JD Notae the offense has scored well at both levels, leaning slightly more on a perimeter attack than inside. The Hogs will likely have plenty of opportunity to score against a team that ranks 264th in effective field goal defense. The Hogs will try to get the offense going early and will have plenty of options to choose from on their deep roster.

The Razorbacks have had 3 double digit scorers in both of their opening games this season. While the scoring has come primarily from the guard play, the 7’3 forward Connor Vanover surprised everyone in their last game scoring 19 points after not seeing the floor in the season opener. While Vanover attributed this success to a hearty Poptart breakfast, it is more likely the result of Musselman’s strategic use of him.

While it is unclear what exactly Musselman looks for in this deliberation it will be interesting to see Vanover’s usage against another small opponent. That said, one of the only things the 7’3 junior lacks is mobility which could prove tough against a team that likes to screen at a high rate. Regardless of the lineup, expect the Panthers to struggle slowing down a versatile Razorback offense on Wednesday night in Bud Walton Arena.

Arkansas Basketball: What to Watch For

As Musselman continues to fidget with lineups you can almost assuredly expect a different starting five than the Hogs tipped off with against Gardner-Webb. Already, the Razorbacks have started to narrow down their main rotations and roles in the opening two matchups. The Hogs have six different players averaging over 20 minutes played a game in JD Notae (32.5), Devo Davis (31.5), Jaylin Williams (27), Au’Diese Toney (25.5), Stanley Umude (22.0), and Chris Lykes (21).

Barring injury, it would be very surprising if JD Notae and Devo Davis didn’t keep this pace throughout the season. Below that, the next four players with the highest usage will likely maintain these numbers throughout the rest of the non-conference schedule as well.

Over time it will be interesting to see where sophomore guard KK Robinson fits in as his role potentially increases. Vanover will continue to lead a plug and play type role with his minutes being largely dictated by the opponent’s lineup and strategy. In the frontcourt, transfers Trey Wade and Kamani Johnson could also see an increased role in the future — particularly against opponents with physical big men who want to establish a presence under the basket.

For the third game in a row, the analytics favor the Razorbacks at home. Kenpom projects a 78-63 victory for the Hogs while Haslametrics has the Hogs winning 84-69. Eric Musselman will certainly push for the Hogs to jump on the Panthers early and not let up. Arkansas has an advantage in nearly every aspect of the game, but by no means can they sleep walk through this one. Expect a game that stays close in the first half with Arkansas pulling away for a third straight double digit victory to start the season.