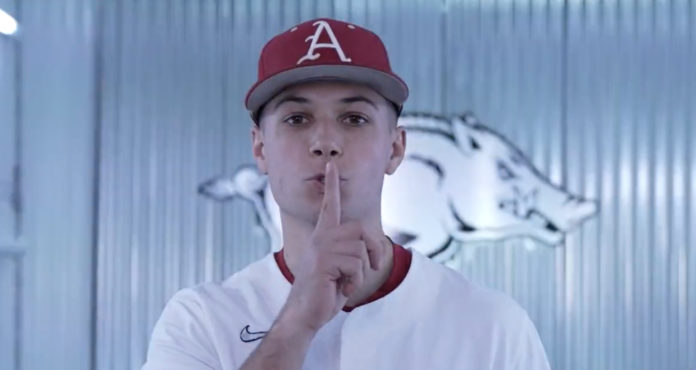 One of the biggest issues heading into this weekend’s series of No. 6 Arkansas Razorbacks (26-7, 9-4) and No. 15 LSU Tigers (23-10, 7-6) had been the batting of junior Robert Moore. The star second baseman was a preseason All-American, but before Thursday night was 5-37 in his past 10 conference games with a home run and six RBIs. Moore’s batting average had dropped to .239 after going 1-14 over the past four games since collecting a pair of hits against UCA. Across airwaves and message boards, Arkansas baseball fans wondered aloud what caused the struggling and when he’d turn it around.

They may not be wondering for long. On Thursday night, a 5-4 series-opening win in Fayetteville, Moore began quieting any doubters in a big way.

The Razorback second baseman’s go-ahead two-run single in the bottom of the seventh catapulted the Hogs from one down to a two-run lead. In the very next frame, Moore’s stellar glovework started an inning-ending double play to help true freshman reliever Brady Tygart escape a bases-loaded jam and preserve the Hogs’ advantage.

Earlier in the game, he’d flashed some major league-level skills to make No. 5 in the SportsCenter Top 10:

Arkansas ace Connor Noland also stepped up on Thursday night, carrying a no-hitter through his first 5 2/3 innings before allowing a base knock. The veteran right-hander carded his sixth quality start of the year in the outing, finishing with seven strikeouts over six innings of four-hit, three-run ball.

The Hogs did not provide Noland with much run support, however, scratching out only two runs over the first six innings. Michael Turner’s RBI fielder’s choice in the bottom of the first and Braydon Webb’s bases-loaded walk in the third were all the runs Noland would get while he was on the mound.

Evan Taylor entered in relief of Noland in the seventh and struck out all three he faced looking as momentum began to swing in Arkansas’ favor. The Razorbacks plated three in the bottom half of the frame with timely hitting, including Braydon Webb’s RBI single and Moore’s go-ahead base knock.

Tygart locked down the final two frames in relief of Taylor, who earned the win to improve to 3-0 on the year. Moore’s double play helped Tygart escape a bases-loaded jam in the eighth en route to his team-leading fifth save of the season. (via Razorback Communications)

Now, the Arkansas baseball program is one win away from clinching its third straight series win over LSU baseball as well as extending its SEC-leading consecutive home series win streak to 11.

Blake Money started the season in dominant fashion, allowing one run over 20.2 innings in his first three starts. Since then, the 6’7 righty has struggled badly. He has allowed 21 runs over 21.2 innings in his last five starts, including four conference opponents.

Hagen Smith is coming off his worst start of his young college career, allowing six earned runs over 4.1 innings against the Gators. It was the first time Smith gave up multiple big flies in the same outing.

In his previous three conference starts, he allowed three runs in each start. Despite the numbers, he can be dominant at times. He allowed a run in the first inning against the Bulldogs but then retired nine of ten in the next three frames.

Smith should be able to bounce back against the Tigers and the Florida game could prove to be an outlier. Money’s struggles have been ongoing and will likely continue against the Razorbacks.

The Razorbacks won Wiggins’ first six starts of the year, but they lost the last two. He did not get a ton of run support in those games. He has gotten an average 4.8 runs of support in conference play.

LSU is scoring an average 8.8 runs in the series finale during conference play. The Tigers have a couple of options to pitch Saturday.

The Tigers have been better at scoring runs in game three than the Razorbacks. Wiggins has been a good starter, but is not getting sufficient run support as of late. And like Smith, is coming off his worst start of the year.

The Razorbacks are coming off their first conference series loss since 2019 and will likely not make it two in a row. The Tigers are a very good team and are not likely to be swept, so Arkansas winning two of three is the most likely scenario.

LSU pitching is holding opponents to 3.9 runs per game in the last nine conference games. Arkansas was limiting conference opponents to 3.4 runs in the first 10 games of SEC play before the Gators tagged them for 16 on Friday and Saturday.

Sure, before Thursday, Robert Moore had been on a cold streak for Arkansas, but most of the offense has been hitting well lately. LSU also has most of their weapons hitting well. The Tigers are scoring 7.3 runs in conference play while Arkansas is scoring 6.3 runs.

LSU has a deep bullpen but the starting pitching has been shaky. Arkansas attacked Mississippi State early in the game and helped them secure the series win. A similar strategy should help them take down the rival Tigers.

Connor Noland is dealing lately and should lead Arkansas to a tough victory Thursday. Saturday gives LSU a few options of who to start. They have a pair of righties that have been very good this year. LSU’s good hitting in game three of the series mixed with a potential shutdown pitcher gives them their best opportunity to win. However, it is a very close series and could go either way Saturday with both Smith and Money having rough outings last weekend.

The below originally published before Game 1

Among common opponents, LSU has the better record.

LSU beats Arkansas when it comes to team ERA and batting average as the Tigers hit .303 and have a team 3.43 ERA. The Razorbacks, meanwhile, bat .285 with a 3.59 ERA. LSU also has the advantage in home runs with 57 compared to 49 for Arkansas. That could change in the coming weeks if one of the Hogs’ sleeping giants awakes.

However, it’s all bad news for the Hogs as there are plenty of Razorbacks who are hitting well recently.

Over half of the starting lineup is on a hot streak as of late with some Hogs playing well over extended periods of time. Sophomore third baseman Cayden Wallace is hitting .377 over the past 13 games with two home runs and 12 RBIs. He has 15 hits in the last nine conference games.

Senior shortstop Jalen Battles is also on a hot streak, hitting .379 over the past 15 games, including going 5-6 over a double header with Arkansas-Pine Bluff Tuesday. His average jumped from .237 to .308 during the current 15-game stretch.

Senior outfielder Braydon Webb continues to impress. Since his 0-23 start, he is hitting .377 over 17+ games with nine home runs and 21 RBIs. His emergence after the dreadful start has been the main story of the offense in 2022.

Another bad stretch ended a little more recently.  Since senior designated hitter Brady Slavens’ 0-17 cold stretch to start conference play, he is 15-30 with three home runs and 17 RBIs over eight games. A monster double header against UAPB stamped his hot streak as he went 6-8 with two home runs and nine RBIs.

Junior left fielder Zack Gregory is also playing well and going under the radar. In his last eight appearances, he is hitting .320 with a .469 on-base percentage with three home runs and eight RBIs.

LSU, to the surprise of nobody, counters with a dangerous lineup of its own. The Tigers have four starters hitting over .320 and four players with more than six home runs while Arkansas has one in Webb. Sophomore third baseman Jacob Berry leads the way for LSU. He is hitting .367 with 10 home runs and 34 RBIs. He is currently riding a 14-game hitting streak where he is batting .396 with two home runs and 13 RBIs.

Sophomore first baseman Tre Morgan is hitting .326 with two home runs and 27 RBIs. Over the past five games, he is 9-21 with a home run and six RBIs.

The Tigers’ offense certainly has some weak points, however. Sophomore shortstop Jordan Thompson and sophomore DH Brayden Jobert combined to go 1-22 in the past three games.

Both teams have dangerous lineups and good pitching staffs. Freshman Hagen Smith and sophomore Jaxon Wiggins both took big hits to their ERA this past weekend and should look to bounce back.

Both of LSU’s consistent starting pitchers have an ERA over four. The Tigers do have a lot of weapons out of the bullpen to pick up any slack. This may be to Arkansas’ advantage because lately they’ve been starting games hot and putting up early runs. They just need to build early leads and pitch to their high potential to win.

While LSU owns a commanding 75-36 record in all-time meetings against the Arkansas baseball program, the Hogs have held the upper hand most recently. The Razorbacks have won back-to-back series over the Tigers, including 2019’s home series against LSU and last year’s three-game set on the road in Baton Rouge, La.

Four of Arkansas’ six all-time series victories against LSU have occurred in Fayetteville, including the series win at Baum-Walker Stadium in 2019. The Razorbacks are seeking back-to-back home series wins over the Tigers for the first time since the 1999 and 2001 campaigns under former head coach Norm DeBriyn. (via Razorback Communications)