Search
Home Arkansas Football Perspective The Problem With Getting Hung Up on the 2-Point Conversion Call That... 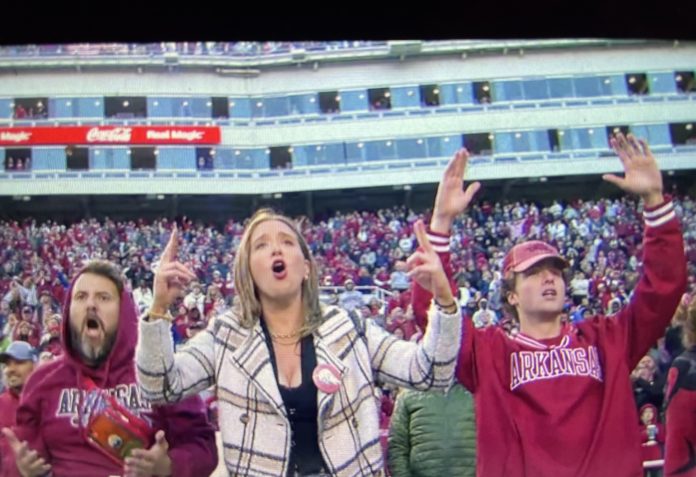 Fraudsters are eventually found out. That’s how they’re frauds in the first place.

The Arkansas football team seems to be earning that designation in 2022. Sam Pittman’s team may have five wins – and remain only at five wins after Saturday’s 21-19 loss to Liberty, they of five seasons in FBS football – but only a single win over what could rightfully be called a good team. The Razorbacks’ quality opponents have all otherwise beaten the Hogs. And mostly handily.

Teams with rosters built like Arkansas’ can only hold out for so long. They’re a group that has a couple of elite players in running back Rocket Sanders and linebacker Drew Sanders, a few potential All-SEC (not first-team SEC, mind you) guys in linebacker Bumper Pool and wide receiver Jadon Haselwood, and a mauling, quality offensive line. But the Hogs also have more issues than they do quality. And when the quality players aren’t having quality games, things like Saturday happen.

The Liberty game never should have come down to a required two-point conversion to tie with 1:11 left. Arkansas, even with its modest SEC talent, surely has more than a team that joined college football’s highest level in just 2018. Arkansas football fans were quick to point fingers at the coaching staff for the defeat and they weren’t wrong to do so. But in the end it seems all the hype about the best players coming up big in the biggest moments, which this author has also played into at points this year, was just wind. Arkansas’ biggest two moments of the year have both resulted in failures from quarterback KJ Jefferson at the goal line.

Jefferson doesn’t deserve to lose his gig as starting quarterback. Heavens, no. And anyone who thinks he should didn’t watch Cade Fortin and Malik Hornsby attempt to play the position against Alabama. It’s just that Arkansas needs Jefferson to be a game-changer. They’re not good enough for him not to be. Simply stated, as much as he has been in previous games, he wasn’t on Saturday.

Jefferson was first-ever-start-against-Rice levels of bad throwing the football in the first half against Liberty. The Flames ended up with seven pass break-ups. That isn’t on offensive coordinator Kendal Briles or the wide receivers. With that number of PBUs, at least some had to have come from forced passes or balls gone askew. On top of that, the toughest quarterback to tackle in the SEC was sacked four times. That, too, isn’t on the offensive line. The game film clearly shows the Hogs’ hogs up front holding the pocket on nearly every drop back. Jefferson simply seemed to have no peripheral vision: he didn’t appear to notice the pass rush nor open receivers in the flat a half-dozen times.

He also received little help from the SEC’s leading rusher. Rocket Sanders had just 60 yards on 17 carries or 42 yards on 16 if you remove his 28-yard scamper from the equation. The totals are eerily similar to the ones he put up against Texas A&M when he went for 68 yards on 17 carries. And so, just like that, a pattern emerges.

Liberty was the Aggies Game Redux. Only in reverse. Instead of squandering a lead, Arkansas rallied. The result was the same, though. “Close” counts in hand grenades and horseshoes. The Razorbacks are that explosive device in your hand. Throw it in time and on-target and you’ll do damage. Keep it too long or don’t recognize your surroundings and you may well blow yourself up.

Some fans would be happy if the latter was the result. Arkansas isn’t a bad football team, just a mediocre one. To the loud crowd online, decent isn’t good enough (nevermind they apparently forgot the Chad Morris days and should be content with what they have, but whatever). Dozens, if not hundreds, are calling for big changes inside the Arkansas football program. Most of the Terminally Online bunch want Briles gone and have desired that outcome for weeks. A few less are calling for defensive coordinator Barry Odom. Fewer still, Sam Pittman.

But that last crew is growing. Whether it’s fair or not is irrelevant. Their voices don’t mean squat in reality, but history has taught us people who seek the negative online tend to grow their followings. They tend to get people to see their messed-up point of view. Ultimately, unfortunately or not, they tend to get their way.

Unless Arkansas gets a miracle in its next two games, Winter Is Coming early in Fayetteville.