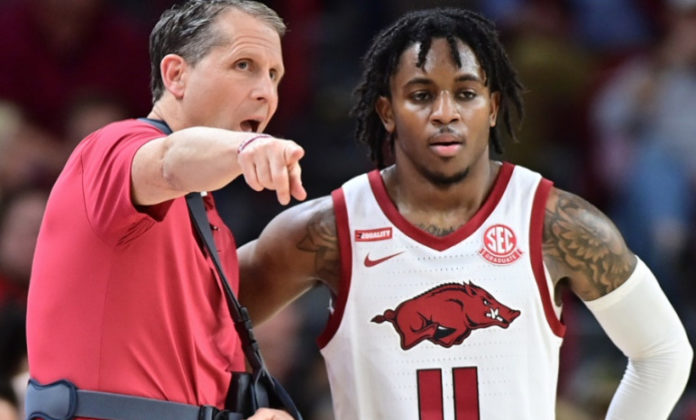 When Arkansas beat then top-ranked Auburn back on February 8th, before Auburn basketball’s reputation took a mighty tumble, it was widely celebrated as the Razorbacks’ first victory over a No. 1 team in 38 years, something that hadn’t been done since Michael Jordan was just a star college player making an appearance in Pine Bluff.

If the Razorbacks are to advance to their second straight Elite Eight, they can’t wait that long to claim another win over a top-ranked team. They’ll need to duplicate the feat about six weeks after that memorable night against Auburn, against a better team that what Auburn has proven to be in the context of tonight’s 18-point loss to No. 10 seed Miami.

On the surface, this may feel like a more daunting challenge than the Auburn game. This won’t be played in the friendly confines of Bud Walton Arena, and Gonzaga has established itself as an elite college basketball program in recent years.

Since 2017, they’ve been a 1-seed in every NCAA Tournament but one (and likely would’ve been one in 2020). Last year, they were undefeated all the way up until they lost in the national championship game to Baylor. Simply put, they don’t lose very often, and since they play in the West Coast Conference, we don’t see them on TV very much. There’s definitely more of a mystique to Gonzaga for Arkansas fans than Auburn had.

That being said, the only teams that matter this week are this season’s teams. Here are some things we know about the game, and the questions that Arkansas will have to answer.

Early Glimpse at Arkansas vs Gonzaga

Gonzaga’s really good. They’re No.1 in both the human and computer rankings for a reason. They’re mostly known for their two bigs, senior Drew Timme and freshman seven-footer Chet Holmgren, who’s expected to be a top pick in the NBA Draft, but their other three starters in the backcourt are all deadly shooters. Senior guard Rasir Bolton is one of the best shooters in the nation. He’s made over 47% of his threes on the season.

How do the Razorbacks game plan for all that?

If anything in this life is certain, if history has taught us anything, it’s that Eric Musselman will have a game plan ready.

In Arkansas’ biggest games against teams with quality bigs, the Hogs have largely allowed those bigs to get their points while cutting down the opponents’ perimeter offense. Kentucky’s Oscar Tshiebwe, Auburn’s Walker Kessler and Jabari Smith, Florida’s Colin Castleton, and Vermont’s Ryan Davis all had big games against the Hogs. And all lost.

That may or may not prove to be Arkansas’ game plan against the Zags, but the Hogs’ length and strength among the team’s perimeter defenders has been a team asset, and they’ll need to continue that trend by making life difficult in the backcourt for the Bulldogs.

Timme is among the nation’s leaders in drawing fouls. According to KenPom he draws 6.2 fouls per 40 minutes, which is good for 33rd in the country. The silver lining for opponents is that he’s a mediocre free throw shooter, converting just 67% of his freebies.

Can Arkansas overcome it?

Jaylin Williams needs to stay out of foul trouble. His importance to this team has been proven throughout the season. If the officials call this game tightly, Williams will be challenged to defend effectively and still remain on the floor. It wouldn’t be a surprise if Kamani Johnson, who did not make an appearance in the first two NCAA Tournament games, gets some time to help defend in the post.

However, Arkansas has largely benefited this season when the officials are whistle-happy. The Razorbacks are one of the top free throw shooting teams in the nation, and despite Arkansas’ foul trouble, good free throw shooting is one of the biggest reasons the Hogs were able to win their first two games of this tournament. It may also benefit the Razorbacks if they can get Gonzaga in foul trouble. Like the Hogs, the Zags use a short rotation. One or two of Williams’ trademark charge calls could have a huge effect on the game if it sends one of Gonzaga’s starters to the bench for a while.

Arkansas’ level of play in the tournament thus far isn’t good enough to beat Gonzaga. The Razorbacks are in the Sweet 16 in consecutive seasons after going 25 years without an appearance, so earning this is a major achievement, but the Hogs haven’t played particularly well so far this postseason. The Hogs were outscored in both 2nd halves in the first two games. Arkansas shot just 27.4% from the field against New Mexico State. Watching the game was a largely agonizing experience until Chris Lykes made the final free throw to put Arkansas up by four with a couple of seconds left.

Gonzaga is capable of playing poorly – they only scored 57 points in their regular season finale against Saint Mary’s – but I’m confident that if Arkansas isn’t more locked in offensively, they won’t be back in the Elite Eight. They can’t expect to play like that and win another game at any remaining stage of this tournament.

Arkansas won’t shoot that poorly again, will they?

When the Razorbacks beat Tennessee in Fayetteville, the Hogs only scored 58 points. The Vols were a great defensive team, but that obviously wasn’t Arkansas’ best offensive game.

But the Hogs’ next game? They put up 82 points in Gainesville to knock off Florida on the road. It was one of the team’s most complete offensive performances. Any time this Arkansas basketball team’s had a subpar performance since the squad’s run started in January, they’ve followed it up with a better one. The lineup Arkansas plays with doesn’t spend much time in ruts. If Arkansas can pull off this upset, they’ll need to be locked in.

The SEC has been a dud in this NCAA Tournament. Kentucky, Auburn, Tennessee, Alabama, and LSU all lost to lower-seeded teams. The Vols spent most of the week whining about not being a 2-seed, they lost to 11-seed Michigan. Kentucky’s massive upset loss to Saint Peter’s has Big Blue Nation considering if they should try marriage counseling with John Calipari or if it’s time to untie the knot. And, of course, there is Auburn’s loss too.

Can Arkansas avoid the SEC bug?

The Razorbacks are in the Sweet 16, so they largely already have. Other than the one-point loss to Alabama, the Razorbacks beat all those other SEC teams in the tournament at least once, so seeing them lose is a familiar sight to Razorback fans. There’s nothing really for Arkansas to avoid here, but it’s fun to point out that Arkansas’ SEC rivals were all disappointments.

All the same, it would be a knock on the overall quality of SEC basketball for Arkansas, as the last remaining SEC team in the tournament, to get handled easily be Gonzaga. If nothing else, mitigating the damage already done by so many SEC losses helps when it comes to convincing recruits they don’t need to head to any other conferences to play vs the best of the best.

The Bulldogs’ dominance this season has been inconsistent. The Zags nearly lost to Memphis (which would have set up a crazy fun matchup with Arkansas for those of us who remember the Arkansas – Memphis rivalry), and didn’t put away 16-seed Georgia State until late in the game. They largely cruised through the West Coast Conference Tournament, but as previously mentioned, they lost their regular season finale to Saint Mary’s.

Arkansas might be the best team Gonzaga has faced this season. The best argument against that is Duke, but they did beat Gonzaga early in the season. The Razorbacks stared down Auburn, Kentucky, and Tennessee this season and stood tall at the end, so the Hogs won’t be intimidated. This game won’t be at Bud Walton like those games were, but Arkansas has played well away from Fayetteville this season.

To me, the biggest key to the game is the Razorbacks’ long range shooting. The length of Timme and Holmgren will make converting at the rim difficult. If the Hogs are hitting from deep and can spread out the Gonzaga defense, they’ll have a great shot. This game will be played in the Chase Center, which is Moses Moody’s home with the Golden State Warriors, so maybe Moody can provide some positive shooting vibes for the Hogs.

I’ve mentioned in this space a couple of times that Arkansas has the resume of a 1 or 2-seed since figuring out its starting lineup. We’ve occasionally seen analysts say that the Hogs are a Final Four-calibur team. This is their chance to prove it.

The 91.6% below most definitely weren’t thinking like the aforementioned analysts:

More on Arkansas vs Gonzaga below:

See our latest on Arkansas vs Gonzaga here: