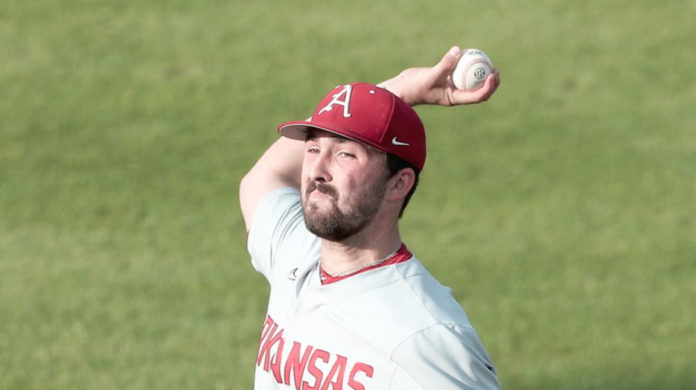 Against the Razorbacks, though, none of that mattered. Fabian was held without a hit and struck out twice as Arkansas rolled to an 8-1 victory in Gainesville. The struggle followed in line with how Arkansas neutralized him last year. Against the Hogs in 2021, Fabian was 1-11 with nine strikeouts despite hitting 20 home runs and knocking in 46 RBIs on the season.

On Thursday night, senior Razorback Connor Noland did most of the damage against the Gators as he threw a seven-inning, seven-strikeout gem in which he allowed just one hit.

“I thought as a team, we played an outstanding game defensively. But really, it all started with Connor Noland filling up up the zone,” Arkansas head coach Dave Van Horn said afterward “He’s just doing an outstanding job of throwing strikes and using both sides of the plate and pitching backwards. I think Connor was fired up. I think our offense was excited about the challenge, and I thought they all stepped it up.”

Michael Turner’s single to the shortstop brought home Cayden Wallace from third to put the Razorbacks up, 1-0, in the top of the fourth. Wallace extended the advantage to two in the very next inning with his run-scoring single to right.

Ahead by two in the sixth, Chris Lanzilli blasted a leadoff home run off Barco, which led to the left-hander’s early departure from the ballgame. The Gator ace struck out seven, but allowed three runs on four hits, three walks and two hit batsmen in five innings of work.

Noland, meanwhile, was dealing on the mound. The Razorback ace only needed 97 pitches to complete seven shutout innings, striking out seven and walking one while limiting Florida to just one hit.

With a comfortable 3-0 lead in the ninth, Arkansas tacked on five runs, spurred by back-to-back solo home runs from Wallace and Webb, who has now homered in three consecutive games for the second time this season.

Turner, who finished the night with three hits and two runs batted in, chipped in with an RBI double in the ninth. Peyton Stovall also got in on the action, bringing home Turner on an RBI single back up the middle. “A lot of timely hits, kind of chipping away,” Van Horn said afterward. “We almost broke through in the fourth with a really big inning, but we did get Barco’s pitch count up, and obviously it affected him later in the game where we took advantage of that and got him out of the game.

Zebulon Vermillion locked down the final two innings of the ballgame, allowing a run but earning his second save of the season in the process.

With the victory, the Arkansas baseball team has now won the opening game of their last 9 SEC road series. Arkansas will go for its conference-leading 14th consecutive SEC series win as well as its seventh consecutive away series win tomorrow night (via Razorback Communications).

How to Watch Arkansas vs Florida

Brandon Sproat has struggled in conference play, allowing 12 runs in 11.1 innings for Florida. Hagen Smith has allowed three runs in each of his three starts in conference play. He is 4-1 with five runs of support or better.

It will be a higher scoring game Friday, but Smith has allowed less runs in more innings during conference play compared to Sproat. If Tygart and Parnell both pitch Thursday, then Arkansas should have the advantage in depth.

No other Gator besides Barco and Parnell have an ERA below three. Arkansas has eight, but some have little experience.

Arkansas has had its highest scoring game of the series on Saturday twice in three conference series. Florida has five runs in their last two Saturday games combined.

Score Prediction: Arkansas wins 11-6 as the Hogs are more likely to win this one than the Los Angeles Dodgers are likely to take the 2022 World Series. Get info to start betting on baseball here.)

Wiggins has looked good in conference play, better than the numbers show. Six shutout innings against Kentucky, went seven innings of two-run ball against Missouri before allowing a couple in the eighth, and allowed just two runs to Mississippi State on solo home runs only.

Florida is 0-3 for series finales in conference play with three different starters. This shows they are having trouble finding a consistent third starter.

Arkansas can take advantage of a struggling Florida team that is trying to figure it out after a rough schedule to start SEC series.

The Razorbacks are the much hotter team midway through the season. The offense is hitting well, despite not clicking on all cylinders yet, a few players have still been struggling. The pitching has been good and consistent from this starting rotation.

Florida is struggling to find starting pitching behind Hunter Barco. He is their best hope to win a game over the weekend. If Barco can have a dominant start Thursday, then they have a good chance to win that game.

In the other two games, the numbers point to Arkansas baseball. Hagen Smith is a better starter and the bullpen is better for the Hogs. That is all paired with the hotter lineup as well.

Sunday has been a mess for the Florida baseball program. In game threes, they are allowing 11 runs per game to SEC teams and scoring under six. Arkansas should easily win Saturday’s series finale.

Thursday was the only game where Florida had a good opportunity to win. Since the Gators choked that chance away,.Arkansas should win the series now.

Arkansas vs Florida Series History
Arkansas and Florida are meeting for the fifth time in the last nine seasons. The Razorbacks own a 36-32 all-time series lead, most recently sweeping the Gators in a three-game set at Baum-Walker Stadium last year to close out the regular season and clinch an overall SEC title.

Florida has had more success against Arkansas at home, however, winning seven of the 10 series played in Gainesville. The Hogs enter this weekend looking for their first series win in Gainesville since 2012.

Last season, the Razorbacks swept the Gators in Fayetteville to clinch the outright regular season SEC Championship. This year, the Gators have home field advantage and a dangerous trio of outfielders.

Jud Fabian isn’t the only dangerous bat in the Florida lineup. Sophomore left fielder Wyatt Langford is hitting .349 with 10 home runs and 31 runs driven in. However, Langford is trending down in recent games. Despite having a three-hit performance against Florida A&M Tuesday, he was just 5-30 in the previous eight games, a .167 average.

Similar to Langford, sophomore right fielder Sterlin Thompson is hitting .348 with seven bombs and 23 RBIs. Unlike Langford, Thompson is riding a 10-game hit streak where he has hit 15-37 which is a .405 average.

Junior catcher BT Riopelleis also riding a nice hit streak, with his coming in at six games where he is hitting .348 during the stretch. His season numbers are also impressive, hitting .315 with seven home runs and 21 RBIs.

Arkansas is hitting a little better than Florida in conference play, averaging 6.6 runs against SEC foes. Sophomore third baseman Cayden Wallace was 5-13 against Mississippi State while senior shortstop Jalen Battles was 4-11. Both had four RBIs over the weekend and Battles crushed two home runs Friday.

Wallace is on a eight-game hitting streak, hitting .382 during that span and Battles is currently on a 10-game hit streak where he is hitting .333 with three home runs. On the opposite side of the coin, junior second baseman Robert Moore has hit just 7-37, or .189,  in the past nine games and freshman first baseman in 4-37, or .108, in nine games against conference opponents.

Senior outfielder Braydon Webb has continued to impress. After his 0-23 start, he is now 17-41, a .415 average, with seven home runs in 13 games. Another guy that may be having a nice turnaround is senior designated hitter Brady Slavens who had a 0-17 streak to start conference play, but now he is 5-10 in the last three games.

Sophomore left fielder Jace Bohrofen, who missed a month of action, hit two home runs Tuesday and got a potential third one robbed by the centerfielder, after going 0-3 with three strikeouts in his first game back from injury Sunday.

Arkansas also has a new weapon in the bullpen in freshman closer Brady Tygart. In conference play, he has a 0.00 ERA over 9.1 innings with 15 strikeouts.  Florida also has a dangerous freshman pitcher in their bullpen in Blake Parnell, who has a 1.11 ERA in 24.1 innings this year.

The Gators’ offense has been struggling to produce runs in conference matchups, but they still possess a lot of power. That makes it important for Arkansas not to help them out and give away free baserunners.