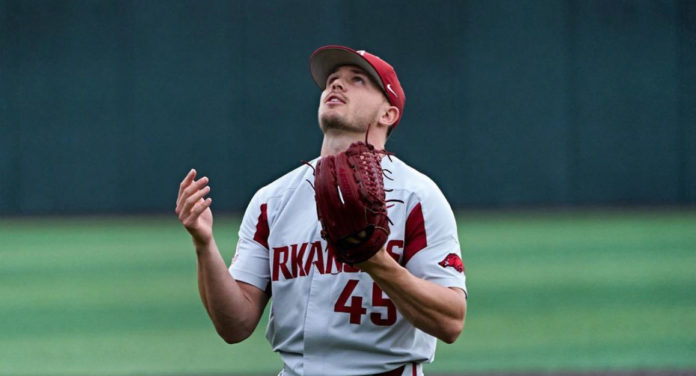 On Thursday night, the No. 1 Arkansas baseball team accomplished step No. 1 in finishing business on what is shaping up to an historically great season.

Then, on Friday night, Arkansas took Game 2 against Florida 4-3 to clinch the overall SEC crown, an impressive feat given how deep and talented the conference is.

“It hasn’t set in yet,” Welch said. “It’s just surreal being out here with these guys in front of this fan base. I mean, you can’t beat it. It’s unbelievable, really.”

But the Hogs accomplished something far more difficult, too.

Arkansas now has a series victory in all 10 of its SEC series this season. That’s something no Arkansas baseball team has ever accomplished before.

In fact, only one SEC program — Vanderbilt in 2013 — had ever won all of its conference series in a single season since the conference went to that format in 1996.

That’s the kind of rare air that this special Arkansas baseball team has entered.

From a purely statistical standpoint, winning all 10 series in the SEC regular season is more difficult than winning the NCAA national championship.

Of course, the latter is the ultimate goal (one the 2013 Vanderbilt missed), but still — no matter what happens with Arkansas baseball this postseason — nothing can ever take away their jaw-droppingly impressive regular season run.

“So many things have to happen over a 30-game season to have that opportunity. We’ve just played really well every weekend – some better than others, but always just enough.”

The Razorbacks rallied from an early multi-run deficit before handing the ball over to the nation’s most dominant pitcher.

Trailing by three runs in the bottom of the second inning, Arkansas’ first spark came off the bat of Christian Franklin.

His 12th homer of the year cut the Hogs’ deficit to two before Jalen Battles made it a one-run game with his RBI sacrifice fly to left. Arkansas starter Caleb Bolden, meanwhile, settled down after allowing three runs over the first two frames.

The right-hander struck out seven in his four innings of work, turning the ballgame over to the bullpen with the Razorbacks trailing by one.

The trio’s dominance allowed the Arkansas baseball team to tie the game at three in the bottom of the eighth. Robert Moore’s two-strike solo homer to right field with two outs in the inning electrified the fans in Baum-Walker Stadium as momentum quickly swung in the Razorbacks’ favor.

Kopps struck out the side in the top of the ninth, setting the stage for the Hogs’ dramatic walk-off winner in the bottom half of the inning.

After Opitz doubled to left center and advanced to third base on an error, Welch stepped up to the plate as a pinch hitter with one out in a 3-3 game.

Welch ripped a liner over the right fielder’s head in right center, and that was all she wrote.

The Hogs will throw right-hander Jaxon Wiggins in tomorrow’s finale against the Gators, eyeing a series sweep to close out the 2021 regular season.

A win in Arkansas vs Florida Game 3 would give Arkansas 22 regular season wins, tying the 1999 team for the most in Arkansas baseball history.

Patrick Wicklander turned in one of the best starts of his career in Thursday night’s win. The left-hander twirled six innings of one-run ball, striking out a career-best 11 while allowing only three hits and a walk.

Brian Musick, an Arkansas baseball commentator on “Razorback Sports Talk” said Wicklander showed poise after his lone mistake which resulted in a solo homer for the Gators.

“Rather than trying to throw his next pitches through the next hitter’s bat, he went 2 straight off speed pitches,” Musick wrote. A change up, then a curve to get ahead 0-2 in the count. That shows me maturity. That shows me a catcher that is equally mature. He rolled the rest of the way.”

Wicklander struck out the side in his final inning of work, finishing off his dominant night with a thunderous ovation from the largest crowd at Baum-Walker Stadium this season.

While the Gators jumped out to an early 1-0 lead with a solo home run in the top of the second, the Hogs had plenty of run support on the way. Casey Opitz, who had three hits and two RBI on the night, tied the game at one in the bottom of the fourth, driving home Christian Franklin with a two-out single to right.

“This is why I don’t stress over his [hitting] slump,” Musick wrote. “He’s got a solid approach. He rarely chases. The hits will come. His OBP is always there.”

Cayden Wallace’s first of two home runs came one inning later. The true freshman went to the opposite field, sneaking a solo shot down the line and over the wall in right to put Arkansas up, 2-1.

Wallace’s second homer of the night was the knockout punch.

With two runners on and two out in the bottom of the eighth, the Greenbrier, Ark., native launched a no-doubter down the line and over the foul pole in left.

His 12th home run of the year, tying him with Matt Goodheart and Robert Moore for the team lead, gave the Razorbacks a five-run advantage.

“Wallace may have announced bedtime but Kopps PUT IT TO BED, as is his custom,” Musick wrote.

Kevin Kopps, the nation’s best pitcher, just kept doing what he does so well.

In taking over for Wicklander, Kopps tossed three no-hit innings with five strikeouts to close out the game.

The nation’s most dominant pitcher lowered his ERA for the year to 0.76 and earned his eighth save of the season while locking down Arkansas’ division-clinching win.

“Wicklander getting the ball directly to Kopps tonight sets up Game 2 better than usual,” Musick wrote. “Caden Monke and/or Ryan Costieu are available. They’re arguably the two best relievers in the non-Kopps division.”

In a chase for regular season history, “this allows DVH to possibly go more aggressively after Game 2 if need be.”

How to Watch Arkansas vs Florida Game 3