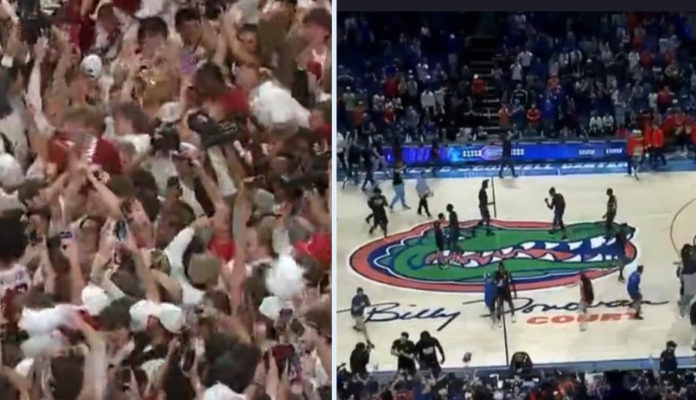 Arkansas picked up their 11th win in 12 games with a 58-48 home win against No. 16 Tennessee on Saturday afternoon. Despite foul trouble to leading scorer, JD Notae, Arkansas closed out the gritty victory by taking care of the basketball and making their free throws down the stretch in front of a packed Bud Walton Arena crowd to improve to 21-6 (10-4) and third place in the SEC. Tennessee dropped to 10-4 in the SEC, though they hold a worse overall record (19-7) and lose any tie-breaker scenarios with Arkansas for the time being. Arkansas improved seven spots in the NET rankings with the home win, jumping from 30 to 23. Tennessee dropped from 9 to 11 after the road loss.

Up next, the Hogs will travel to Gainesville in search of their third straight victory on Tuesday night. For anyone born after 1990, there is a realistic chance they don’t remember the last time Arkansas accomplished this feat in February of 1995. Arkansas’s second-longest SEC road losing streak dates back only to February of 2015 when they last won a game in Starkville, MS against the Mississippi State Bulldogs – nearly 20 full years after their last road win against the Gators.

Jaylin Williams doesn’t think this lengthy losing streak will be an issue for his team, however. “Every game is just a basketball game to us, so we’re not going to think about that,” said Williams about Arkansas’s last win in Gainesville coming in 1995. “We’re not the teams from before that went there. We’re going to go into that game confident and ready to play and just be energetic as a team.”

Florida also saw a significant jump in their NET rankings, jumping from 53 to 47 after an impressive 63-62 home win over No. 2 Auburn. The Gators shot 40% from deep for the fifth time this year in their one-point upset victory, led by senior guard, Tyree Appleby’s 5-10 performance. Though they made similar leaps in the NET rankings, the Gators’ attempt at rushing the court after their big win did little to rival the Razorbacks’ frenzied atmosphere in their win over Auburn a few weeks back.

Indeed, compared to what went down in Bud Walton Arena, whatever the Gator fans tried to do in Gainesville came off looking more like a “court drizzling” than a bonafide court storming:

What to Expect When Florida Has the Ball

Appleby, a 6-1 senior from Devo Davis’ hometown of Jacksonville, AR, led his team in scoring in the Gators’ upset victory over Auburn on Saturday. He averages 10.7 points per game to go along with 3.7 assists, 2.1 rebounds, and 1.4 steals. The starting guard is one of Florida’s biggest 3-point threats in terms of volume (5.4 attempts) and efficiency (33%). Appleby is one of three Gators with experience against the Razorbacks, losing his only game against Arkansas in Fayetteville in February of 2021. In his lone game against the Hogs, Appleby scored 16 points on 43% shooting from the field, including 14% from behind the arc, and 100% (3-3) from the charity stripe.

Colin Castleton is Florida’s leading scorer and also participated in the Gators’ road loss to Arkansas in February of 2021. He put up 13 points, six rebounds, two steals, and two blocks the last time he faced the Hogs on 40% FG shooting. This season, he is shooting nearly 57% from inside the 3-point line to go along with 15.7 points (8th in the SEC), 9.1 rebounds (3rd), and 2.7 blocks (2nd) per game. His matchup against Jaylin Williams on both ends of the court could prove to be the deciding factor in this game. Castleton also commits 2.2 fouls per game, a weak point that Williams can exploit through taking charges and attacking the paint offensively.

Anthony Duruji, a 6-7 senior, joins Castleton in the frontcourt. With 117 career games, Duruji is third in the Florida rotation in career games played. He’s averaging 10.1 points, 4.1 rebounds, and 1.4 steals per game. He leads the Gators in 2-point percentage at 65% while also hitting nearly 33% of his 3-point attempts.

Brandon McKissic and Myreon Jones, a pair of 6-3 seniors, round out the core of Florida’s rotation, averaging 24.6 and 27.9 minutes per game respectively. McKissis averages roughly six points and three rebounds per game but shoots less than 25% from 3-point range on the season. Don’t expect Arkansas basketball coach Eric Musselman to assign one of his key defenders to McKissic early in the game. Instead, look for the Hogs’ key defenders to set their sights on Myreon Jones who leads the Gators in 3-point attempts at 5.8 per game while hitting roughly 35% of those attempts.

Jaylin Williams pulled down a career-high 16 rebounds in the Hogs’ last win over the Tennessee Volunteers – this came about a month after Williams set his previous career-high of 15 rebounds vs West Virginia earlier this season. He also contributed 13 points, two assists, a steal, and a block while pushing his season charges-taken count to 41 for the season. This marked Williams’ 9th double-double in his last 13 games. He’s averaging 14 points and 11 rebounds per game during this stretch, but he will have his hands full again against the Gators as he matches up with Colin Castleton, Florida’s leading scorer.

JD Notae saw his second-lowest minute total of the season against the Volunteers after fouling out in 24 minutes of action. He still managed to keep his double-digit scoring streak alive with 13 points on the day, making it 27 straight games with at least 10 points. Notae shot 3-6 (50%) against Tennessee, continuing his hot shooting streak. In his last four games, the SEC Player of the Year candidate has shot a combined 44% from long range to go along with 17.5 points, 3.0 rebounds, 2.8 assists, and 2.3 steals per game. Per usual, Notae’s ability to stay on the court and out of foul trouble will be crucial to the Razorbacks’ success.

In the event that Notae does find himself on the bench with foul trouble, other Razorbacks will have to step up as they did against Tennessee. Chris Lykes played a big role in closing out Arkansas’s big win on Saturday with his ability to break the Volunteers’ press and knock down his free throws down the stretch. Devo Davis was also huge on Saturday, hitting 2-3 threes for the second straight game. This pushes Davis up to 6-12 (50%) shooting from distance in his last four games.

Stanley Umude had scored 42 total points in his last two games prior to a five-point outing against Tennessee. His ability to bounce back and be a consistent scorer will push the Hogs offense to new heights not only against Florida but for the remainder of the Razorbacks’ season.

Arkansas vs Florida: What to Watch For

Stellar defense from the Hogs will aid in forcing turnovers, but their ability to draw charges will also play a big role in this game. Jaylin Williams usually draws charges against guards attacking the rim, but he would do well to force Colin Castleton into foul trouble. Jason Jitoboh, a 6-11 junior, was Florida’s go-to backup center, but it was announced that he underwent season-ending eye surgery on January 28th. Now, Florida’s biggest player aside from Castleton is 6-7 forward, Anthony Duruji.

ESPN’s Basketball Power Index gives Florida a 58.6% chance at beating the Razorbacks in Gainesville. Florida leads the all-time series 26-13, including winning nine of the last 10 meetings. And, it’s worth repeating: Arkansas hasn’t won a game in Gainesville in 27 years.

“Because we don’t shoot the three great, I think what we’ve figured out is we really have to defend the 3-point line,” said Musselman. “I don’t think we really had that belief and understanding of the importance of defending the three and defending for the full shot clock. I mean, we certainly didn’t against Hofstra.”

The Hogs will once again flex their defensive muscles as they hold Florida below their season shooting percentages at home. JD Notae will stay out of foul trouble and score 20 points for the first time since Arkansas’s win over Auburn, and Jaylin Williams will ultimately win his matchup with Colin Castleton.

How to Watch Arkansas vs Florida