When it comes to Arkansas basketball, two big themes have emerged in the first three rounds of the NCAA Tournament:

Ahead of tonight’s Arkansas vs Baylor Elite Eight showdown, there’s no shortage of insiders and talking heads who predict Baylor to win.

The NCAA’s analyst Andy Katz, for instance, takes Baylor at the end of this preview.

“It will be very difficult for Devo Davis to get off the same kind of shots he had against Oral Roberts,” Katz says. “He will have basically four guards running at him at any given time.”

The Sporting News chimes in with its own prediction (Baylor 75, Arkansas 68) while multiple Arkansas media members are also picking the Bears to win.

None of this is particularly surprising.

They are the nation’s top three-point shooting team by percentage (40.8%) and rank first among high-major conference teams with 17.4 turnovers forced per game.

There’s a reason why they lost only two games this season.

But Arkansas has enough firepower to derail what many assume is a direct line to the title game for Baylor. And after warring with the likes of Alabama and LSU in the regular season and Texas Tech and Oral Roberts in the postseason, the Hogs are plenty battle-tested.

Hardly any of that matters to ESPN’s analytics team, apparently.

That group regularly churns out a Basketball Power Index, which is their measure of team strength that’s meant to be the best predictor of performance going forward.

The analysts concocted a formula that favors many non-elite teams over Arkansas, presumably because of the Hogs’ non-conference schedule, other SEC teams’ failure to make it deep into this NCAA tournament and the Hogs’ recent slim margins of victory.

Still, there’s something wrong with a power index when it ranks 18-11 Texas Tech team at No. 9 — four spots higher than Arkansas, the 25-6 team that ended its season.

It further gets its Todd Fuhrman on by giving Arkansas essentially no credit for winning its Sweet 16 game.

A mere 1% increase after beating an extremely tough Oral Roberts team that had already taken down a two-seed in Ohio State and seven-seed in Florida?

By discounting the severity of the threat that the Golden Eagles’ presented, that’s also a big slap across Oral Roberts’ face.

According to ESPN BPI, Baylor has a 74.8% chance to take down Arkansas.

And according to SEC Network analyst Jimmy Dykes, Baylor has the edge but Arkansas can win “if they play to their very best capability.”

So how will Arkansas vs Baylor play out? 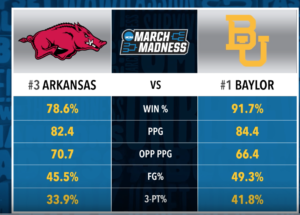 Baylor vs Arkansas: When Bears Have the Ball

Baylor also rank 3rd in the country in offensive adjusted efficiency, which makes them the best offense the Hogs have faced to date.

Fortunately for the Razorbacks, their defense has continued to impress and has improved to the 10th-best defense in the country over the last few games. Expect Baylor lean on its three-point shooting to attack an Arkansas defense that ranks 138th in perimeter defense.

But if Baylor finds it three-point shooting stroke in this game, Arkansas’ chances of winning will be a lot less than the 25.2% shot that ESPN gives them.

The Arkansas guards will have their hands full guarding Davion Mitchell, Jared Butler, and MaCio Teague who have shot above 40% from beyond the arc on the season and can wreak havoc driving to the rim.

“They’re all great shooters, they can beat you off the bounce, they have great spacing,” Eric Musselman said. “They defend as perimeter players. This is just a really, really difficult team to prepare for.”

If the Hogs can force missed shots consistently, it will be equally important that they secure defensive rebounds throughout the game.

This has been an area of struggle for the Hogs, particularly in their second-round matchup with Texas Tech, and Baylor ranks 6th in the country in offensive rebounds. Arkansas will have to box out and attack the ball off of any long misses from Baylor.

The majority of Baylor’s possessions will set up in the half-court as they don’t play particularly fast. Look for Musselman to try and speed the game up with select traps and pressure beyond mid-court.

Baylor vs Arkansas: When Hogs Have the Ball

While the Hogs have scored plenty of points this tournament, their offensive effort has not been very efficient The Arkansas offense has fallen to 47th in the country as they have struggled to find good looks inside the arc.

Meanwhile, the number of three-point attempts has plummeted.

Some of that is because of the recent shooting slump that has shackled its best player, Moses Moody.

Moody’s scoring output has dipped to nearly 14 points a game in the NCAA Tournament. He’s only shot 36% overall and made only three of 10 three-point attempts.

Moody will likely need to re-find his shooting stroke if the Hogs want to keep up with the fast-paced Baylor offense. Devo Davis, hero of the Oral Roberts win, should also boost their offense and quicken their tempo.

The electrifying freshman is averaging 14.3 points on 51.3% shooting this tournament.

Meanwhile, guard Jalen Tate is coming off a huge 22-point performance against Oral Roberts and Justin Smith continues to be an offensive threat in every game he has played in.

Arkansas will need to hit at least a handful of threes if they want to keep this close and will likely look to drive and dish to earn these looks throughout the game.

One area to keep a close eye on is the turnover game. The Hogs do a good but not great job of holding on to the basketball which will be key against a defense that ranks 3rd in forced turnovers and 6th in steals.

The Bears’ Davion Mitchell, widely considered as the best defender in the nation, is an especially destructive force with two steals a game.

“We’re going to have to avoid any catastrophic turnovers and try to get shots on goal,” Musselman said. “You put that thing on the deck and they’ll swarm to you. They’ll leave the strongside corner. They’ll attack the ball with multiple people when you try to get in the lanes.”

“So it’ll be really important for us to have patience and to make the right reads against defensive coverages.”

To win, the Razorbacks must play with confidence and pace while avoiding costly turnovers. This burden falls largely on guards Jalen Tate, J.D. Notae and Devo Davis.

The Hogs will have to execute on all levels and capitalize in transition to keep this game interesting. Expect Musselman to have at least a couple of schematic tricks up his sleeve should the Hogs struggle on offense early on.

This is a very difficult game to pick. The metrics and experts are showing a favorable matchup for the top-seeded Bears falling anywhere from 6-9-point favorites.

The “eye-test” would counter this argument with a breakdown of the resilience the Razorbacks have shown in all three outings. This game could certainly go either way but if Arkansas can manage to keep this game in reach, don’t be surprised for the Hogs to win another close one and move on to the Final Four for the first time in 26 years.

For more, watch this in-depth analysis from the Pig Trail Nation team:

“He may not be the best guard tonight in the game — he might be — but if he’s not, it’s not going to be because he didn’t play harder than Jared Butler and MaCio Teague and Davion Mitchell.”

“Now those dudes from Baylor play hard. They’re not going to play any harder than Devo Davis.”

“They are very explosive dudes off the bounce especially the [Davion] Mitchell kid, the transfer from Auburn. He’s probably improved more than anyone in college basketball from last year to this year.”

“So offensively Baylor can really put you in a bind, but then on the other end, the floor they’ve had some stretches where they looked like the best defensive team in the country.”

“Justin Smith is such a key guy for the Hogs and arguably Baylor’s second-best defender is Mark Vital, who’s 6’7″ and 245. So Baylor has had a guy that all year long looks like he’s ready to defend Justin Smith.”

“You need Justin to keep being Justin. If Arkansas is gonna play small, then Smith has to have a big game.”

Biggest Keys to the Game

“The good thing about Arkansas is that it doesn’t rely on one guy or one area.”

“You have to gang rebound against Baylor and be the most aggressive team.”

“If you lose right now in the Elite Eight, you want to go down knowing you threw as many punches as you had left for your season.”

“You don’t settle for jump shots. You are the most aggressive team.. That’s how Arkansas can stay in this game and have a chance to win at the end: pound that glass, be active, be aggressive, turn it into a little bit of a slugfest.”

How to Watch Arkansas vs Baylor

This piece was co-authored by Jonah Rapert and Evin Demirel.