Search
Home Arkansas Baseball Around the SEC Once Again, Arkansas vs Auburn Will Prove Hogs’ Mettle 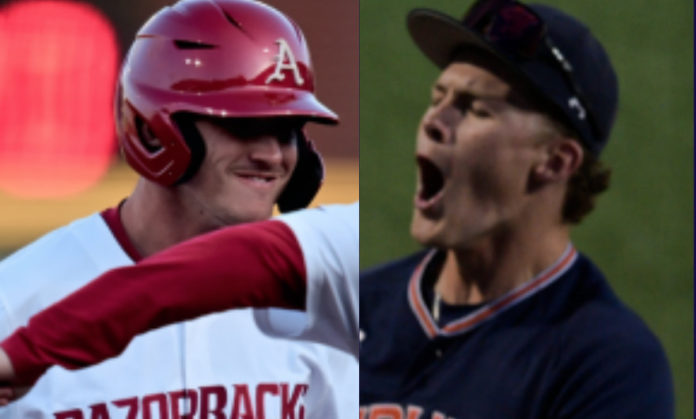 Flashing back just three short months, Arkansas got its basketball mojo going in earnest when it knocked off No. 1 Auburn at Bud Walton Arena, 80-76, in an overtime thriller.

The basketball Hogs lived up to and beyond the hype, ultimately. So far, this top five baseball team has in most ways looked the part, but again the litmus test of progress will come against an Auburn Tiger team making national waves.

As its basketball squad did, Auburn’s baseball team caught fire early on. Auburn baseball coach Butch Thompson doesn’t get the publicity other SEC coaches attract, but he’s got this team positioned squarely in second place in the West.

Auburn is not at full strength, but nevertheless jazzed about the opportunity at hand. The Hogs’ two-game lead in the division is perilous at best, and the Tigers sense this weekend might determine a Super Regional hosting opportunity.

If Arkansas plans to rebuff that bid, it’s going to take far better effort across the board than what we’ve seen of late.

It Starts at the Top

For the Razorbacks, the 2022 season to date has exposed some curiosities.

One of the country’s top power-hitting lineups a year ago, Arkansas sits roughly middle of the pack or worse in most offensive categories in conference play. And the struggles largely rest at the feet of the guys expected to carry the load.

Robert Moore’s had terrible luck, mostly, but his pedestrian output (.230, four homers) and Brady Slavens’ mercurial performance have limited the lineup’s proficiency. Cayden Wallace, for his part, maintains a .302 mark but he’s fallen a little short of run-production standards, too.

It worked, sort of. The Greenbrier product notched five hits in the series win, but only scored twice, ahead of home runs. In fact, that’s how the Hogs got all their offense against the Rebels.

And it’s that inability to manufacture runs, to play station-to-station ball, that seems to restrain an otherwise potent bunch. The Hogs boast only two regulars who are hitting over .300 in SEC games (Wallace and transfer catcher Michael Turner), and are an unimpressive .254 as a team over 21 league games.

Here’s the good news: Braydon Webb’s benefited from moving down in the order and has seven homers in SEC play. And even if Moore and Slavens both sit below .200 in league games, they’ve still combined for 29 RBI across the 21 contests.

The optimist’s view is that Arkansas’s regulars are too proven, too skilled to struggle for another month-plus. Auburn, of course, has other ideas.

Thompson inherited a program in rough shape in 2015, but slowly cultivated a new winning tradition. The Tigers jumped back into the NCAA tournament in 2017 after a four-season absence, made it to the Super Regional in 2018, and on to Omaha in 2019.

COVID-19 snuffed out their promising 2020 and nothing ever seemed to go the Tigers’ way last year as they limped to 25-27. With Auburn’s best player, Ryan Bliss, turning pro, that didn’t suggest this team would go far.

But outside of the 41-4 Vols, the Tigers arguably rate as the second-best team in the SEC according to the most recent D1Baseball.com projections. And it’s not hard to understand why, when you consider they have candidates for the top offensive player and pitcher in the league.

Auburn’s 47 home runs place the Tigers twelfth in the league, but Sonny DiChiara owns thirty percent of those (13), leads the SEC in hitting (.436), and sits third with 15 doubles. The burly Samford transfer, along with Blake Rambusch, anchors a sneakily productive lineup that produces the third-best average and fourth-most runs in the league.

The pitching staff sports a true ace in Joseph Gonzalez, who doesn’t try to overpower hitters but instead relies on command to the tune of only eight walks over 54 innings. The 6-4 sophomore is 6-1 with a 2.30 ERA, and if he’s able to leave with a lead, closer Blake Burkhalter leads the league with 11 saves, has four wins to boot, and strikes out better than 13 per nine innings.

Auburn’s steady enough afield with a .979 fielding average, which is still well behind the Hogs’ league-best .985. And on that note, the one area where Arkansas may still hold the most critical advantage is how it supports its staff defensively even if the bats aren’t afire.

“Tygart Time” Could Be the Difference

Freshman Brady Tygart is too good to simply eat innings at the back of games his whole career. But for now, he’s been every bit the weapon Kopps was, by some pretty important metrics:

The same bedeviling off speed stuff, combined with Tygart’s ability to “go long” (he’s pitched two-plus innings in nine of his 15 appearances), make the end of games every bit as hard on Hog foes this season as last.

The difference now is that Arkansas simply seems to need more late-game heroics like Kendall Diggs’ walkoff to win. This Arkansas vs Auburn series won’t grant the Razorbacks the last at-bat, though, so it’s critical they start stronger than they’ve been doing so.

More on Arkansas vs Auburn here: