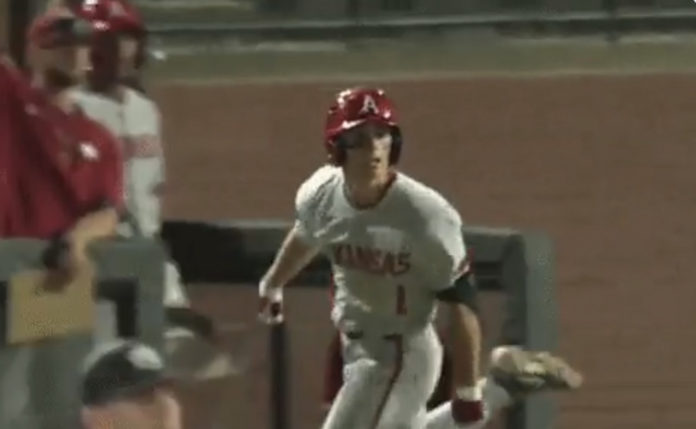 Three homers, including a pair of three-run blasts, carried the visiting Razorbacks from a five-run deficit to an 11-8 come-from-behind win over an Auburn that didn’t quite know what just hit them at Plainsman Park. With the win, the Arkansas baseball program extended its lead over the Tigers in the SEC West to three games. Arkansas remains two games ahead of second-place No. 13 Texas A&M (29-15, 13-9 SEC) and No. 20 LSU (31-14, 13-9 SEC) in the division.

A shaky start to Friday night’s contest put Arkansas at an early five-run disadvantage. Auburn busted up starter Connor Noland for five runs (three earned) on six hits and four walks, knocking out the Razorback ace after just four innings. It was the first time that senior ace failed to go five innings in 2022.

“Just didn’t have the command,” Arkansas baseball coach Dave Van Horn said afterward. “Didn’t really command his fastball or his breaking ball. He’s had so many good outings for us, it’s not like we didn’t expect it to happen.”

The Hogs were far from finished, however, beginning their comeback with two runs in the top of the fifth. Cayden Wallace’s infield single and Brady Slavens’ sacrifice fly to center closed Arkansas’ deficit to three.

Auburn added a run back in the bottom half of the frame via the long ball, but Arkansas’ rally was just getting started. Jace Bohforen’s two-run homer in the top of the sixth made it a 6-4 ballgame before the Razorbacks jumped ahead for good with four runs in the seventh.

Michael Turner scored on an error to bring Arkansas within one until Kendall Diggs stepped up to the plate with two on and nobody out. The true freshman crushed a go-ahead three-run home run to right field, catapulting the Hogs to their first lead of the night.

Robert Moore’s three-run blast in the eighth was the final blow as Arkansas opened an 11-6 lead to swing the game’s momentum entirely. It was the first home run in 13 games for the sophomore preseason All-American. “He just missed some pitches early in the game and we’re thinking, ‘Man, just break loose, Robert,’” Van Horn said. “When he hit the home run, the whole team was really excited because it gave us a five-run lead, but they were excited for Robert.

“Robert was super excited in the dugout. … I think it was a little bit of a relief for him, too, just to really help the team and get a big hit like that.”

Moore finished the night as one of four Razorbacks, including Wallace, Turner and Brady Slavens, with multiple hits and one of three with multiple RBI in the win.

The Razorback bullpen was strong in relief of Noland, combining for five innings of three-run ball to allow Arkansas to mount its comeback. Kole Ramage (1.0 IP, 1 SO), Evan Taylor (2.1 IP, 2 SO) and Brady Tygart (1.2 IP, 4 SO) did the heavy lifting to lock down the Hogs’ 11-8 series-opening win on the road. (via Razorback Communications)

See below for Arkansas vs Auburn Game 2 details

This series, which may determine the SEC West winner, will be a lot more competitive and important than a lot of fans expected at the start of the year.

Currently, Auburn baseball is ranked higher than Arkansas in the NCAA’s college baseball RPI. Thanks to big wins against the likes of Texas Tech and Vanderbilt earlier in the season, the Tigers sit at No. 4 while the Razorbacks are way back at No. 28. In Baseball America’s most recent projected field of 64 for the NCAA tournament, the Tigers are the 9-seed while Arkansas is the 10-seed.

The Razorbacks are ranked fourth in the country despite not living up to their full potential. The home run numbers are down compared to last season and some players have struggled to consistently produce.

Over the past five games, though, it’s more than just Moore that has hit a slump. Senior shortstop Jalen Battles is already having a better season at the plate, surpassing his home run total from last year in much fewer games, but he is 2-18 over the past five ballgames.

Senior catcher and team batting average leader Michael Turner is struggling as of late, going 1-19 in the past five games. Senior designated hitter Brady Slavens is 1-20 in the same span.

Also, junior left fielder Zack Gregory has only one hit in his last 10 at-bats but continues to draw walks.

It is not all bad for the Razorbacks. Senior center fielder Braydon Webb is the reigning SEC player of the week after going 6-10 with two home runs against Ole Miss.

Sophomore third baseman Cayden Wallace was 8-19 over five games going into the mid-week matchup with Missouri State. Senior right fielder Chris Lanzilli is on an 11-game hit streak and he is batting .350 in his past five games.

Sophomore left fielder Jace Bohrofen started all three games with Ole Miss and collected a hit in each contest. In contrast, freshman first baseman Peyton Stovall only played one game against Ole Miss.

Plus, freshman pitcher Brady Tygart is the reigning freshman of the week after his five shutout innings out of the bullpen against the Rebels. Tygart has been fantastic for the Razorbacks, putting up numbers comparable to Kevin Kopps, the former Arkansas baseball great.

Tygart has been more prone to walk batters, but has held hitters to a lower batting average and slugging percentage than Kopps.

Auburn, meanwhile, has lost two of their last three weekend series, to Mississippi State and Tennessee. They are just two games behind the Hogs in the SEC West, so a sweep would be major for the Tigers.

They wield a dangerous lineup, with a .291 team average. However, they do not rely on the home run much, hitting just 47 balls out of the park and only one player has more than six.

The heart of that lineup is senior first baseman Sonny DiChiara, who is hitting .436 with a nearly .600 on-base percentage and 13 home runs, 40 RBIs. Over the past nine games he is 14-28 with two home runs and seven RBIs.

The Tigers have three other starters over .300 including junior third baseman Blake Rambusch. He is hitting .362 from the leadoff spot but took a 1-11 in the series with Tennessee.

The two other Auburn baseball starters over .300 are senior center fielder Kason Howell who is hitting .302 and senior left fielder Brooks Carlson at .300 even. Howell is 3-8 in the last two games but went through a 1-19 stretch right before.

Bright started the season not allowing an earned run over 17 innings in his first three starts. Then, the season got a lot tougher for the right-handed and Auburn lost his next six starts. Bright won his last two starts but the ERA has not been much better. He has a 6.42 ERA in SEC play.

Hagen Smith, the talented Razorback freshman, has struggled on the road this year. He allowed 12 runs over 11.2 innings in his first three road starts. He allowed just one run over three innings to Texas A&M in his last start outside Fayetteville, but he did walk five batters.

Smith’s biggest problem has been keeping the ball in the ballpark and Auburn is not a big home run hitting team, so that bodes well for the freshman.

Both pitchers have something to prove on Saturday. It could be a tough game for both guys or they could have a pitching duel to build on the little momentum they both have built.

Gonzalez has emerged as the best starter in the Auburn baseball rotation over the past five weeks. He struggled against Tennessee, but the Volunteers have been the most dominant team in baseball this year.

Prior to that start, he had allowed three runs over 24 innings in his previous three starts, including a complete game against Vanderbilt and seven shutout innings against South Carolina. Jaxon Wiggins has had a tough go as of late for Arkansas. Over his past four starts he has allowed 17 runs over 12.2 innings.

The game is pointing towards Auburn in the pitching matchup, but Arkansas has put up six runs a game in series finales.

This will be a tough and likely close series for both teams, as any line in Vegas would bear out.

While sports betting had been legalized in Arkansas as early as 2018, it was limited to being allowed in-person only, at specific sites that held relevant licenses. But in February 2022, the local law changed, and online sports betting was allowed, with several sports books putting applications in with the regulators to get the required licenses, hoping to be up and running in time for March Madness and college baseball.

The change in legislation looks to have sports betting technology covered under existing gambling frameworks, rather than developing entirely new ones for its operations. There are some additional add-ons, more targeted toward online sports betting and the use of apps, but the majority fit with Amendment 100 which saw in-person betting being allowed in brick-and-mortar casinos in Arkansas.To kick things off, it was Casino Racing’s Betly online sportsbook that was first to launch, debuting online sports betting in Arkansas on Saturday 5th March 2022. However, since then, we have seen several other companies also launching their sports betting apps, such as BetMGM Sportsbook in Arkansas.

There are storylines for each pitching matchup going into the weekend.

Connor Noland continues to dominate but can’t get any run support while Auburn gets just enough support to keep them in the game.

On Saturday, both pitchers will be in situations where they have struggled lately but have been able to win their last few starts. It will come down to who capitalizes and makes adjustments the best.

On Sunday, it will be a battle of a pitcher who is hitting his stride against a pitcher who seems to have lost his. It will take a big turnaround for Arkansas to hold game three, but it is possible.

The first two games are very important for Arkansas because the Tigers have an apparent advantage in the pitching Sunday.

The Razorback bats also need to get going. If they don’t, they are in trouble of dropping their third road series of the year.

Arkansas and Dave Van Horn are good at making adjustments and can devise an attack plan that will get runners home this weekend. If that happens, look for the next batch of RPI rankings to look closer to many fans’ preseason expectations.