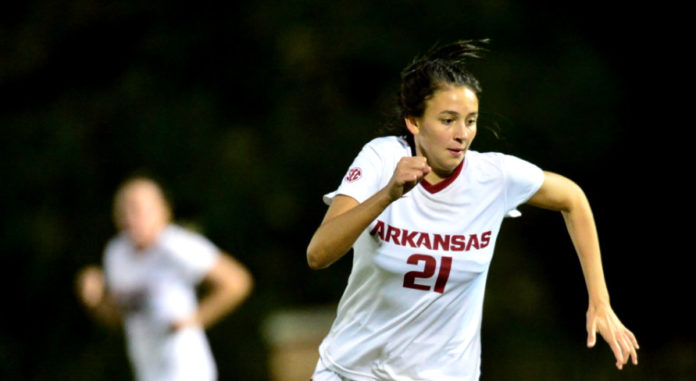 Despite some hiccups, this is still a golden age for Arkansas soccer.

The program, under Colby Hale, is as good as it’s ever been, regularly breaking into the top 10, winning regular season SEC championships and making the NCAA Tournament every year since 2013.

Despite all the regular season success, however, the Razorbacks have had trouble breaking through in the postseason.

Although Arkansas soccer had consistently made the SEC Championship Game, it hasn’t yet won it. And the program hasn’t yet advanced past the Sweet 16 in the NCAA Tournament.

The Broncos proved to be too much, winning 2-0 at a neutral site in North Carolina.

Razorback goalkeeper Hannah Warner had two saves through the opening 20 minutes to keep the match scoreless, but Santa broke through in the 28th-minute.

That’s when the Broncos got on the board with a headed goal from Izzy D’Aquila on an indirect assist from Julie Doyle.

At the 73-minute mark, Doyle put a dagger in the heart of the Arkansas soccer team by sending in a cross that was hit in by Skylar Smith.

Arkansas’ Parker Goins got the first quality look for the Razorbacks with a long-distance shot at the 43-minute mark.

Kiley Dulaney got past a couple of Broncos defenders down the right side and put a ball across the face of the goal. However, the Razorbacks weren’t able to get off a clean shot in the 58th-minute.

Arkansas soccer star Anna Podojil had a chance to tie the game early in the second half. As the Arkansas Democrat-Gazette reported, “she got the ball deep in the Broncos’ side after Parker Goins intercepted a Santa Clara pass and fed the ball to her teammate, but Santa Clara keeper Marlee Nicolos was there for the save.”

Although Arkansas soccer still hasn’t broken through in the postseason, it keeps beating on the door.

Eventually, it will happen.

The Razorback coaches will no doubt design practices which address some of the weaknesses laid bare in the Santa Clara loss, using tactics that range from traditional drills to more innovative tactics found in the likes of BlazePod for soccer coaches.

Anna Podojil, despite the forgettable performance, is already the most decorated player in Razorback soccer and will be back for her junior season.

There’s a lot to look forward to when the new season kicks off in the fall.