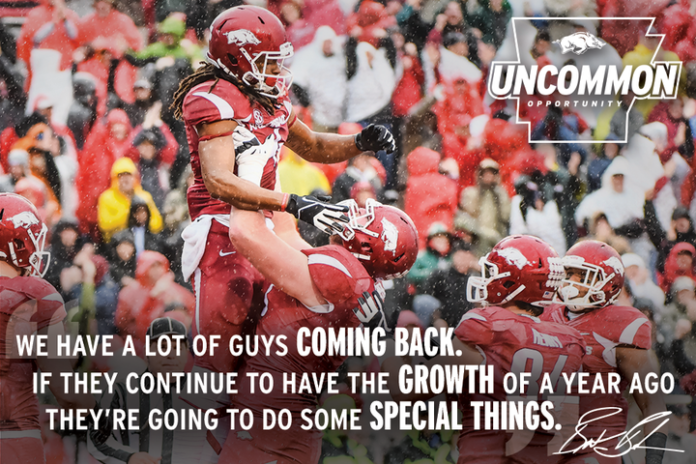 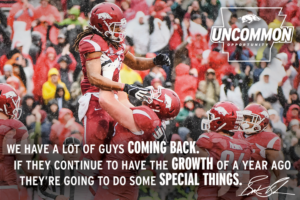 No matter what you call it, it is most certainly how often programs ranked No. 18 in the AP’s preseason poll seriously contend for national titles late into the season.

Only a handful of teams have done it since the poll began in 1936, and this year a rapidly improving Arkansas program aims to join that bunch. But for the ’15 Hogs to earn a place among the best preseason No. 18’s in the history of college football, they need to match the accomplishments of the teams listed here. Each squad soared well beyond off-season expectations to almost do what none of their predecessors could.

These are the top No. 18’s of all time according to the Simple Rating System. The SRS, as explained by sports-reference.com, is a rating that takes into account average point differential and strength of schedule. Sports-reference.com has calculated an SRS rating for every team ranked No. 18 in the first released AP poll of each season since 1936. The teams below have the four highest such ratings.

Defense was at the center of this “Purple Reign” squad many Huskies fans still feel deserve a national title despite a late-season 16-7 loss at USC. Yet it was UW’s offense which defined its definitive 28-17 Orange Bowl win against No. 2 Oklahoma. Its intricate blocking scheme neutralized what had been a fearsome Sooners defense featuring defensive tackle Tony Casillas and a brash freshman linebacker named Brian Bosworth.

The next morning brought disappoint. Despite an inferior schedule, undefeated Brigham Young was voted as national champion by the AP and UPI. Meanwhile, the Huskies finished No. 2. “It was no doubt in our mind we were going to be national champions,” linebacker Joe Kelly told the Seattle Times. “Oklahoma was going to be No. 1, and we destroyed them.”

Like Arkansas … Washington ‘84 was known for its conservative offense. “It was just a pro-style offense,” wide receiver Mark Pattison told the Times’ Larry Stone. “We’d run twice up the middle, then throw it for 5 yards to a tight end.” Although the Huskies scored 29.3 points a game, they did not exactly spread the field under young offensive coordinator Gary Pinkel. Quarterback Hugh Millen couldn’t recall running “a single play all year with more than two receivers in the game at the same time.”

Unlike Arkansas… the Huskies got publicly crunk at a disco on a cruise ship. And they nearly brawled with equally soused Sooners, who for some reason were put on the same cruise in the Biscayne Bay off Miami before the Orange Bowl. Even if these kinds of cruises were resurrected for the upcoming bowl season, don’t expect the same for the “Orange Bowl special” drink which were offered up by the hospitality crew.

If you like Razorback football, check out my Arkansas sports radio interview roundup with notables like Jeff Long and SI.com’s Pete Thamel (whose behind-the-scenes profile of Bret Bielema publishes this week). Click here for more info.

Let’s go ahead and get the mandated preamble out of the way: A long, long time ago, Ivy League schools were actually really good at football. Dartmouth, for one, won a national title in 1925. Twelve years later, behind ballers like halfback Bob “The Wildfire Scot” MacLeod, it could have contended for another by playing in the postseason. But the school president declined an invitation to the Rose Bowl – or any bowl for that matter.  Ernest Hopkins, you see, hated the idea of his students still caring about football in December and January. He didn’t think the sport deserved any more of their time after Thanksgiving Day during class finals.

“My own theory has always been that if one held to the fundamental philosophy of college men incidentally playing football as against football players incidentally going to college, most of the evils of intercollegiate competition would be avoided,” Hopkins wrote in 1937.

Not only did Dartmouth refuse California’s overture to play in the Rose Bowl, but Choice No. 2 – Pitt – did as well. At this point in the Great Depression, Pitt couldn’t afford the cross country trip to Pasadena, Calif.

Undefeated Alabama ended up losing 13-0 in their stead.

Like Arkansas… Dartmouth has one national championship at the highest level of college football.

Unlike Arkansas… Dartmouth has no chance of ever getting another*.

*Reason No. 1: Ivies to this day aren’t allowed to play postseason games. Reason No. 2: This is still Dartmouth.

[These are the first installments of a four-part series. To see how Arkansas compares to the SEC team in part three, go here]