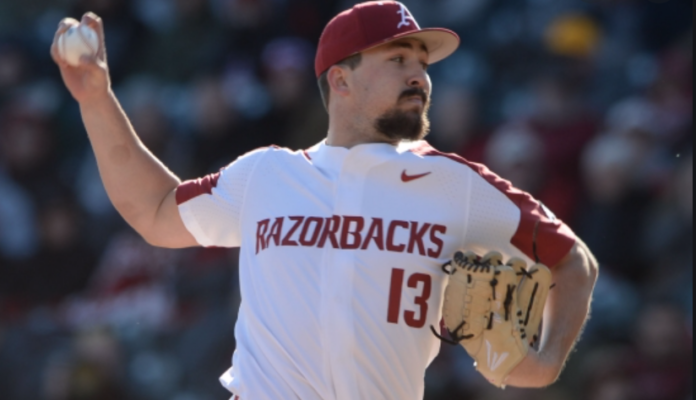 Arkansas baseball, which entered the 2020 season ranked as highly as No. 4 in the nation (by Perfect Nation), is widely considered as a strong contender for a third straight trip to the College World Series.

The Hogs looked every bit the part to open the season in a three-game sweep of Eastern Illinois in which the Hogs outscored its opponents by a combined score of 27-5.

To capitalize on potential, however, and bring home the program’s long-awaited first national title, Arkansas pitchers will need to keep delivering. Arkansas coach Dave Van Horn believes they are more than up to the challenge.

“We’ve got more depth than we’ve ever had,” Van Horn recently said on the Buzz 103.7 FM. “We’ve got good arms,” he said, referring to the likes of 2019 starters Connor Noland and Patrick Wicklander and a mix of hard-throwing relief pitchers and talented freshmen.

Specifically, Van Horn thinks he has more guys throwing harder than he’s had in a long time — what he said on a preseason Arkansas pitchers special was “a mix of guys who can throw the fastball from 94 [mph] to even one who touched 98.”

The offense is poised to be powerful enough to take some pressure off the bullpen. “We should play good defense and we should score runs so the pitchers shouldn’t feel pressure that they gotta hold people down to two or three runs a game. We should be able to put up five or six [runs] every game I would hope.”

Here is Dave Van Horn’s breakdown of a few of the top Arkansas pitchers, per the Arkansas Democrat-Gazette:

(In Game 1 versus Eastern Illinois, threw 11 strike outs and allowed one run in 6.2 innings)

“Connor’s a strike thrower, and he’s got really good off-speed pitches and his velocity is up. He’s throwing the ball 91-92 right now, all the time.[with a high of 93 mph]. Last year at this time, he was 88 to 91. And then it faded a little bit towards the end of the season. I don’t think he’s gonna fade this year. I think he’s gonna get stronger when it warms up.”

Connor Noland has also added eight pounds to reach 220 pounds on his 6’2″ frame.

(In Game 2 versus Eastern Illinois, threw seven strikes in five innings while allowing no runs)

“Last year, the only issue he had was he walked too many people. I think his record was like 6-2, something like that. But I can’t tell you how many games we took him out in the fourth inning with two outs with a 4-1 lead, but he had just walked two and their best hitter’s up and we had to go to a right-hander.”

“He left some wins on the table. If he throws strikes, he’s going to be one of the top lefties in the country.”

Wicklander said he has worked on secondary pitches (he added a curveball) and on throwing more strikes with better velocity.

Other veteran pitchers who will expect to be available for relief duty include Kevin Kopps, Kole Ramage and Caleb Bolden, who redshirted last year after going through Tommy John surgery.

One sophomore Razorback pitcher is look out for is Jacob Burton, Van Horn told the Buzz 103.7’s Justin Acri and Wess Moore: “Jacob Burton probably jumps out a little bit cause he throws a ball nothing but hard. I mean it’s 96, 97 [mph] out of his hand and he’s starting to throw strikes with a little bit of slider.”

“When he makes mistakes, his fastball’s a little straight and we hit it. But if he gets that breaking ball like he’s done so far this year, I think he’s going to be a kid that jumps up a lot” in improvement from his freshman year.

Burton closed Arkansas’ 12-3 win over Eastern Illinois in its third game of the season. Could he develop into the closer who replaces Matt Cronin, the Arkansas pitcher who closed so well in the 2018 and 2019 seasons?

“We’ve got four or five guys with really good arms. I think it’s going to evolve. It’s like when [Matt] Cronin was a sophomore, we didn’t know he was our closer yet. But then he took the role and he got it done for two years and made a name for himself. We feel like we got a couple of guys that have a chance to do that. We’ll close by committee a little bit the first couple of weeks.“

Finally, don’t forget about touted freshmen like Blake Adams* and the junior with possibly the coolest name among all SEC student-athletes: Zebulon Vermillion. The 6-4 Vermillion has developed a kind of pitch Van Horn has never seen before, he told CST.

“He’s come up with another pitch, it’s a combination of a slider and change-up combo, I don’t know what to call it — but our guys did not hit it. He’s throwing the ball in the mid 90s. We’re finally healthy this year and I think he’s going to have a good year for us.”