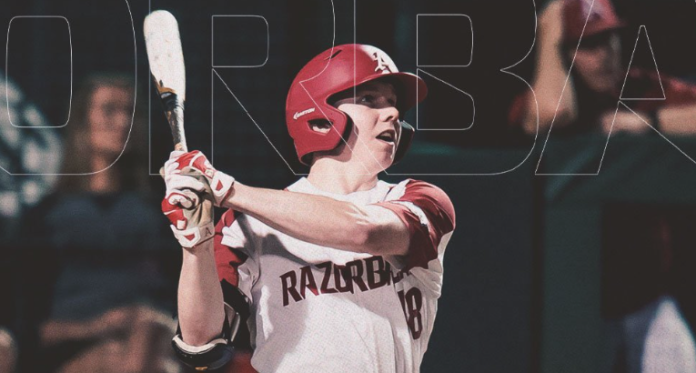 After winning the 2018 SEC Freshman of the Year award, Kjerstad comes into his sophomore season as one of the nation’s most highly touted players. Heston Kjerstad was named a freshman All-American by Collegiate Baseball and the NCBWA, while also making the All-SEC Second Team and the SEC All-Freshman Team.

The Amarillo, Texas native started all 69 games for the Hogs in left field and finished second on the Razorback baseball squad with a .332 batting average. He also led with 87 hits, 14 home runs and 58 RBIs — all Arkansas baseball freshman records.

Listen to what Kjerstad did in the offseason to get even better:

Martin was a key part of Razorback baseball’s amazing run to their ninth College World Series appearance last year. He led all Hogs with a .352 batting average in the NCAA Tournament, including a .357 clip in the CWS.

Pitcher Matt Cronin returns as one of the nation’s top relievers after setting a Razorback baseball single-season record with 14 saves. That tied for the second-most in the SEC and No. 14 in the nation. Over his 48.1 innings, Cronin struck out 59 batters and held opponents to a .154 batting average. That was the lowest on the team for the second straight season.

Fletcher returns to captain the outfield after another killer year in the field and at the plate. The junior notched his second-straight year with a .280 average or higher and 10 or more home runs. That made him the first Razorback since Rodney Nye (1998-99) to hit 10 or more homers in his first two seasons. Dominic Fletcher upped his production from his freshman to his sophomore season. He tallied 23 multi-hit games and 11 multi-RBI games.

Arkansas is only one of two schools across the nation with four preseason All-Americans. The other one, not surprisingly, is the same Oregon State program that beat Arkansas in the finals last year.

And those dag-nabbed Beavers have two first team All-Americans.

You may throw something at the screen now.

The above post is by Evin Demirel, author of African-American Athletes in Arkansas. His amazong book features the decline of the black Razorback baseball players (with insight from Arvis Harper) and stories from Fort Smith Mayor George McGill about Satchel Paige playing against his father.