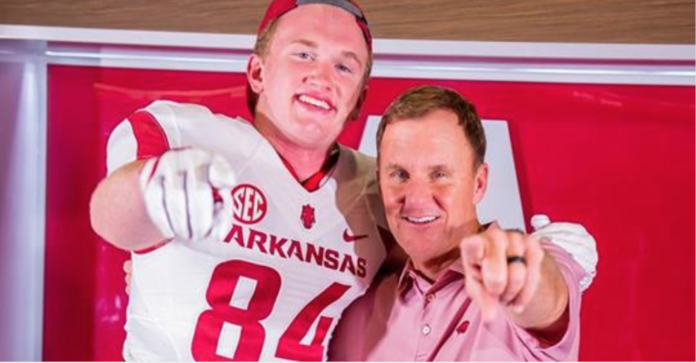 Well, that was impressive.

The dust has now settled on National Signing Day 2019, and Arkansas walks away with 25 signees in all. The Hogs missed out on signing stars Lakia Henry (chose Ole Miss) and Adonis Otney (flipped to USC), so its final ranking (No. 20 according to Rivals) wasn’t as high as some fans expected.

Even with those misses, though, the Hogs still set an impressive record by signing 11 four-players. That’s the most dating back to the start of the rankings era in 2002.

It signals a new level of recruiting from the past, when Arkansas rarely signed more than a handful of blue chippers in a single season. The Hogs signed a total of 10 such players the previous three years: Two in 2018, four in 2017 and four in 2016.

Head coach Chad Morris is ready to rock and roll with the new weapons at his disposal. “We got better today as a program without a doubt, with new additions to an already strong class of 2019.”

In a press conference, Morris gave the highest praise to the elite Texan safety, Jalen Catalon. “One of the top five high school players I’ve ever seen. A fantastic player, plays safety, can play a lot of different positions. I’ve been watching high school football for a very long time and recruiting for a very long time, and this young man is one of the best that I’ve seen.”

Catalon signed in Mansfield, Texas, flanked by two high school teammates who had also signed with the Hogs: Taurean Carter and Enoch Jackson.

In the below clip, he also discusses the possibility of playing baseball for the Hogs:

In an interview at Little Rock’s Pulaski Academy after signing, the top tight end in the nation said: “At one point, it was between Arkansas and Stanford. I think it was about 70/30, maybe 60/40, for Arkansas. I just had to keep my options open… After seeing a couple games, it was easier to make my decision.”

On fellow Hogs signee Treylon Burks: “I love Treylon. I met him on the visit, got to talk to him and Marcus Miller for a while. Great guys — fantastic, funny, hard workers from what I’ve heard and seen. I’m just so excited to be apart of a group of guys who are like-minded like me.”

His versatility reminds me of Darren McFadden. And Darren McFadden’s the best player I’ve ever seen in this state. So that’s the highest compliment as I can give Treylon Burks … Treylon will give them a lot of what they didn’t have last year. He’s gonna be a great receiver, got size and can get those 50/50 balls. He’s gonna play immediately.

In the below video, you get a sense of Treylon’s easy-going demeanor (definitely the opposite of Catalon’s energy) and his health status (85%) recovering from his ACL surgery:

What’s next? Make sure to check out my piece below: