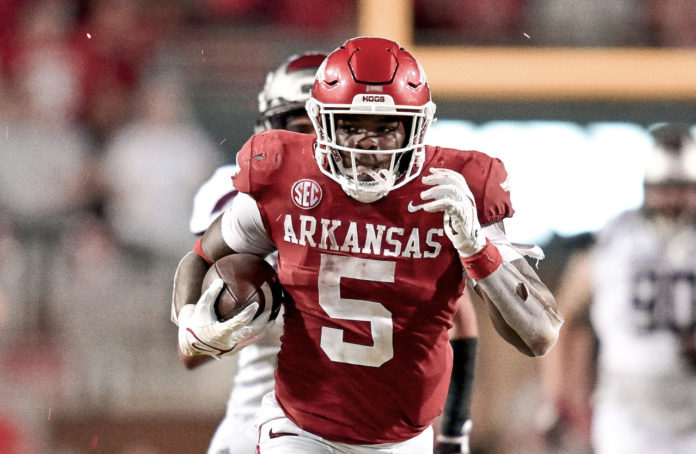 FAYETTEVILLE — For much of Saturday night, Arkansas football fans were likely having nightmarish flashbacks to The Coach Who Must Not Be Named.

In two-plus years, Sam Pittman has done a lot to erase those memories, but falling into a 17-0 hole against an FCS team coached by Bobby Petrino and trailing by 10 well into the fourth quarter has a way of sending you back to those dark places.

Instead, the No. 10 Razorbacks rallied for a 38-27 win over Missouri State inside Reynolds Razorback Stadium — something that almost certainly wouldn’t have happened when The Coach Who Must Not Be Named was in charge and overseeing a home loss to San Jose State.

“It was great for me to see, because I’ve been here for a minute,” fifth-year senior Simeon Blair said. “A few years ago, we probably — with things not going our way — would have shut down. It was great to see that progress in our team that things could be going back, but we pulled together. We never got to fussin’ on the sideline. We more came together and encouraged each other.”

Blair didn’t have to mention him by name. It is understood that things are different now than how they were in 2018 and 2019, when fake fair catches and blowout losses to former players had Arkansas on SportsCenter for all the wrong reasons.

“These games like this, if you’re not playing well or the other team’s playing well or whatever the situation is, you’re trying to fight and claw to get out with a win,” Pittman said. “There was several different times in the game it looked like we weren’t going to. Our kids just kept fighting and clawing, and to come out with an 11-point win says a lot about the culture of our program and our kids.”

A Rough Start for Arkansas Football

Missouri State didn’t make it easy. When quarterback Jason Shelley made Bumper Pool miss and raced 24 yards for a touchdown to put the Bears up 17-0 early in the second quarter, Arkansas was officially on upset alert.

Up to that point, the Razorbacks had a pair of three-and-outs and lost a couple of fumbles on their four possessions. Meanwhile, Missouri State’s offense was chugging along and probably had fans mumbling Petrino’s old nickname — ‘BMFP’ — albeit with a slightly different tone for the two middle initials.

The man described by many as an offensive genius was coaching circles around Arkansas’ beloved head man, a fact that Pittman admitted himself in the postgame.

“I want to congratulate Missouri State and Coach Petrino on a great game plan,” Pittman said. “He had his kids better prepared than I did. He did a wonderful job.”

Not much went right for the Razorbacks early on. In addition to its turnovers, the offense struggled with drops and, at times, couldn’t run the ball in early downs. The defense missed numerous tackles and let several receivers run free for easy grabs. Even special teams had a pair of holding penalties that wiped out 34- and 10-yard punt returns.

“I learned against Auburn last year not to panic,” Pittman said. “On the fourth down where we ran the ball, but I tried not to panic. Because if I do, the team will. So we just kept up and talked about what we’re doing good.”

Ah yes, the fourth-down call. Arkansas had pulled within 17-7 and was trying to make it a one-possession game before halftime. It got crossed the 50 before the drive stalled.

Faced with attempting a 56-yard field goal, punting in plus territory or going for it on fourth-and-9, the Razorbacks opted for the latter. The decision itself made sense, but the call — a handoff up the middle — was a head-scratcher. Rashod Dubinion picked up five yards, but was well short of the line to gain.

“We thought that we had them in 2 and quarters, thought we could surprise them and it was a run to run, basically we can hand it or KJ can run it,” Pittman said. “It didn’t work. That’s the honest to goodness truth. I wish I could tell you we had a pass on and something happened. That’s the truth, though. It didn’t work.”

The Razorbacks’ true comeback bid started a little bit after that play. They forced a punt and then covered 85 yards on just two plays that took only 16 seconds off the clock.

Before KJ Jefferson’s 38-yard touchdown pass to Jadon Haselwood, he connected with Matt Landers on a 47-yard deep ball down the sideline. It was part of an 7-catch, 123-yard performance for the Toledo transfer.

Making the breakout game even better, it was Landers’ first game after dropping a sure-fire touchdown the week before against South Carolina. Pittman said he was pretty down on himself because of the drop, but he made up for it with receptions on several similar passes Saturday.

“The good Lord is perfect, nobody else is,” Pittman said. “We’re going to be all right. For him to bounce back like that, it’s big. He’s going to help us.”

Although that got Arkansas within three, Missouri State managed to push its lead back out to 10 early in the fourth quarter. Things weren’t looking particularly good, but then the Razorbacks got another quick-strike score.

This time, it was a redemption opportunity for Rocket Sanders. While the star running back had fumbled at the 1-yard line earlier in the game, but made up for it by grabbing a shovel pass and taking it 73 yards to the house.

“I actually ran that against South Carolina and…I didn’t read it how I was supposed to read it,” Sanders said. “I feel like getting that play called, I got chills. I got chills knowing I was going to take it far, if not to a touchdown.”

Pittman put it in much simpler terms: “That’s why his Momma named him Rocket,” he joked.

The defense opened the ensuing Missouri State drive with back-to-back sacks — two of its eight in the game — and forced a punt, at which point Bryce Stephens took over.

Barely two minutes after Sanders scored on a long play, the redshirt freshman fielded a punt at the 18, got a few blocks and raced down the sideline for an 82-yard touchdown. Unlike his earlier returns, there were no flags on the play. For a team that hadn’t trailed the first two weeks of the season, it was Arkansas’ first lead of the night.

The Bears were far from out of it. Even after punting it back to Arkansas on the next possession, they were on the verge of getting the ball back with plenty of time left and a chance to win game.

However, on third-and-12, Jefferson delivered a strike to Trey Knox on the sideline to move the chains on a drive that eventually resulted with the game-sealing touchdown. Keeping with the redemption theme, Knox had a deep ball glance off his finger tips in the first half and tipped a pass into the air on the game’s lone interception, but the Razorbacks’ starting quarterback didn’t hesitate to go right back to him.

That proved to be the final knock-out blow by Arkansas, which was heavily favored as a top-10 FBS team facing a team from the FCS ranks. Had they lost, the Hogs would followed the “greatest upset of them all” as only the second such highly ranked team to ever lose to an FCS squad.

“I knew it was going to be hard to hold onto it,” Petrino said. “They’ve got really good players, really good coaches so we knew they were going to make a run back. I was encouraged when we answered it and went back and got another touchdown. But eventually they wore us down, made a lot of plays and ended up beating us.”

It was similar to what happened to Missouri State last year, when it had a couple of chances to knock off Oklahoma State at the beginning of the season before losing 23-16. That game was brought to the attention of Arkansas in preparation this week, so the players knew what the Bears were capable of.

“I don’t feel like we overlooked them at all,” safety Simeon Blair said. “We knew that they were going to be a good team. We looked a look at their film against Oklahoma State the previous year where they had a good game and almost beat them. I just feel like we started a little slow. We were trying to get our legs under us.”

Pittman, meanwhile, downplayed the possible explanation of Razorbacks just performing at an FCS as opposed to SEC level, but his postgame comments made it seem like he felt it was at least a partial concern.

“The name on the side of the hat is pretty significant, but I don’t in any way want to not give Missouri State everything they deserve,” Pittman said. “Their team wasn’t better than us today because we beat them, but Coach (Petrino) was better than me today, and I have to get that fixed.”

If nothing else, Arkansas proved it is never out of a game, no matter how poorly things are going at any given time — but a stronger opponent, such as those looming in the weeks ahead, could make it tougher.

Check out what Sam Pittman said about Arkansas football’s 38-27 win over Missouri State: