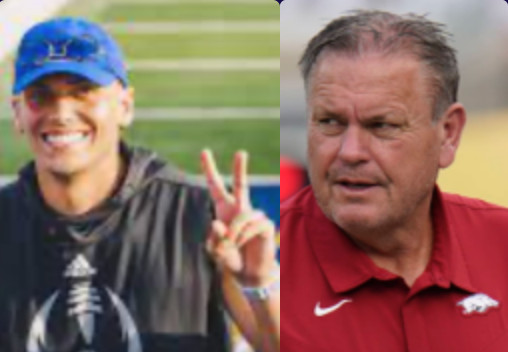 In the nearly-365-days-a-year grind that is college football coaching, this Memorial Day weekend has been one of the rare chances for Sam Pittman to kick back and relax away from it all.

When it comes to acquiring some 5-star caliber R&R, the Arkansas football coach’s go-to destination has long been Hot Springs, Ark. Indeed, his love of the area an hour southwest of Little Rock and desire to one day retire there plays a part in his overall infatuation with the state of Arkansas itself. He especially loves getting out on one of the region’s excellent lakes. “The pontoon boat will be plenty enough speed for me. I like good music, and out there and having fun,” he recently said on “The Zone” on The Buzz 103.7 FM. “I used to not be able to go out more than 45 minutes, but I can go out there three hours on it, and just relax, go by and see our friends. We got a lot of friends that live on the lake down there. It’s a special, special place.”

As far as the music goes, Sam Pittman has put together a 162-song playlist for what he terms his “Hot Springs Yacht Club.” On it are some classic oldies from the likes of the Bachman-Turner Overdrive, the Eagles, Boston and Aerosmith. He’s also open to whatever his football players want to stretch to during practice.

Currently, the No. 1 song on his playlist belongs to Adam Levine, the Maroon 5 front man. But last year that spot belonged to a name that will send shivers down the spine of some Razorback fans: Justin Bieber. Pittman has confessed that he likes Bieber’s hit song “Peaches,” (now down to No. 8 on his playlist), which causes a bit of involuntary twitching for those who recall the Chad Morris era.

Justin Bieber, on his own, can sometimes be annoying but he’s not horrible. Same goes with Nick Starkel, the former Arkansas quarterback who had an up-and-mostly-down season in his lone year in Fayetteville under Chad Morris but often took a starring role in other parts of his college career.

At his previous stop in Texas A&M and the first part of his Razorback season in 2019, Starkel was well known for his love of Justin Bieber. He even wore a shirt of the pop star under his jersey during games. If Starkel had kept playing as well as he did against Colorado State early in the season for the rest of that year, then his Bieber mania probably would have been overlooked as a loveable quirk among Arkansas football fans.

Instead, Bieber became a scapegoat in the wake of Starkel’s five-interception game in Arkansas’ home loss to FCS San Jose State. Starkel said he was “done with distractions,” which included wearing the Bieber shirt and Bieber, in turn, tut-tutted his former acolyte:

Things didn’t go much better the rest of the year, in which Starkel later shared the Arkansas football coaches made him feel like a trashed “old toy” when they gave more minutes to Ben Hicks. Not longer afterward Chad Morris was fired and Nick Starkel transferred out, but Starkel did redeem himself to a degree at his next stop in San Jose State.

That next season, Starkel threw for 2,174 passes and 17 touchdowns against 7 interceptions while leading the Spartans to a bowl game.

After another year in college, Starkel joined the Dallas Cowboys’ rookie minicamp a couple weeks ago.

“It’s a dream come true to go out there and put on that Cowboys helmet,” Starkel said. “I don’t know if it’s going to be a star on it. I hope there is. It will be sweet. That is all I can ask for right now. I am excited to go in there and compete and join this rookie class for minicamp and see what happens from there.”

Starkel, who was good friends with the late son of Babe Laufenberg, the Cowboys’ radio color analyst, didn’t make the team. But the 24-year-old is not finished with the game yet. The self-described “freelance quarterback coach” has joined LinkedIn and his most recent post states: “I am now looking for job opportunities for next fall. Hoping to be out in Orange County, CA and would love to be working in and around football.”

If Nick Starkel does end up in Orange County, he live in the same sprawling metro area as Justin Bieber, who lives in Beverly Hills. In that case, it’s possible that Starkel could end up running into Bieber face to face one day. Nothing awkward at all about that, I’m sure.

Sam Pittman in the Band

Pittman grew up in a musical family and played the guitar and a bit of the piano. He played the tuba in his Grove High School band, he told Justin Acri and Wess Moore on The Buzz 103.7 FM.

In high school, Pittman would alternate between playing footbal on the field we playing in the band. “We used to play, and then at half you had to be in the band. I don’t understand all that, you know? I finally asked my dad, I said, ‘Dad, I can’t play football, then play in the band.’ You take your shoulder pads off and do the halftime thing, and then go back and play in football. He let me not play in the band anymore, because I used to play the tuba, and I was second chair — but there was only two of us.”