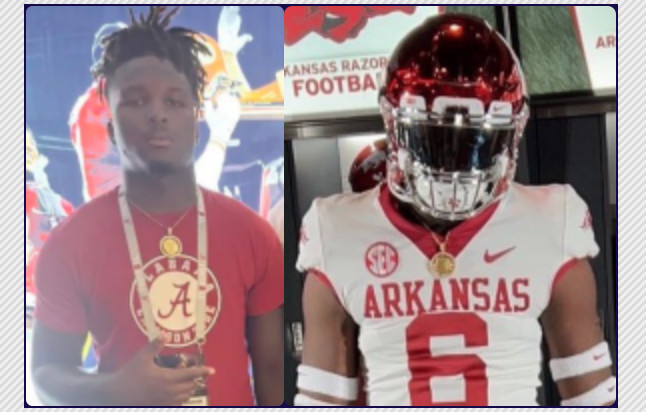 A furious third-quarter rally wasn’t enough for it to snap a now 16-game losing streak to Alabama, but Arkansas football is still hopeful it can beat the Crimson Tide on the recruiting trail for a prospect in their backyard.

One of the Razorbacks’ top targets in the 2024 class is defensive lineman Kavion Henderson from Leeds, Ala., which is an hour drive from the University of Alabama.

A four-star recruit by most outlets, Henderson is a top-100 prospect on ESPN and Rivals. His 247Sports Composite score of .9256 puts him 193rd overall in the Class of 2024 and is higher than everyone in Arkansas’ current freshman class except Fayetteville native Isaiah Sategna (.9432).

The Razorbacks offered the 6-foot-3, 235-pound defensive lineman earlier this year after he visited Fayetteville for Junior Day on Jan. 23. Following the trip, he described the relationships he has been building with the Arkansas coaching staff.

“Really don’t have a word for it,” Henderson told WholeHogSports. “But it feels like they are already my coaches, if you know what I mean.”

He also described his first visit to Fayetteville as a home-type feel and the best visit he had been on at that point. The synergy between Henderson, Fayetteville and the coaching staff will be very important for the Razorbacks, as Henderson has said relationships are driving his recruiting process.

Arkansas isn’t the only big program interested and invested in the talented junior. Henderson has a lot of interest around the country and a few more programs have made impressions on him since he visited Arkansas in January.

Garnering attention from a young age, Henderson started on varsity as an eighth grader and earned a scholarship offer from Tennessee just weeks into his freshman year of high school. He has offers from all of the top names in college football, but has whittled his list of 40-plus schools down to a top five of Arkansas, Alabama, Auburn, Georgia and Oklahoma.

The Crimson Tide may have a foot in the door with Henderson already. Alabama is the nearest major program to his hometown, a proximity seen in some of this closet relatives. His grandfather, specifically, is an Alabama fan, so it was extra special when the Tide pulled the trigger with an offer.

“(Alabama defensive line coach Freddie Roach) told me coach Saban watched my film, and he asked since my grandad was an Alabama fan, how would he feel if I had an offer from them,” Henderson told Touchdown Alabama Magazine. “I said he would be proud. After that, he said `I want to offer you a scholarship to the University of Alabama’ and told me to dominate tonight.”

After picking up that offer Sept. 2, Alabama replaced Cincinnati in Henderson’s top five. He visited the Crimson Tide a few weeks later and saw them dominate Vanderbilt 55-3.

Even though Henderson is the state’s No. 1 recruit in the 2024 class, it’s not a done deal with Alabama, though. Two recruiting analysts have submitted crystal ball picks on 247Sports, with Arkansas and Oklahoma each receiving one prediction. The lone FutureCast on Rivals is for Alabama, and it was submitted much more recently than the two crystal ball picks.

Henderson is set to announce his commitment at 3 p.m. on Nov. 6.

Rivals is very high on the young prospect, ranking him 81st in the Rivals250 for 2024 and the top recruit from Alabama. ESPN has him second in the state, but No. 37 overall. Although it isn’t quite as high on him, 247Sports ranks Henderson as the 234th overall prospect in the country.

His freshman season highlights show that Henderson has been a star for a while. He has a combination of power and speed that makes him nearly unguardable in high school. In many of his highlights, he is already past the would-be blocker before he can even get out of his stance.

He also displayed his power as a freshman, pushing offensive linemen backwards with ease and displaying his speed by hawking down scrambling quarterbacks. Henderson is a run stopper on the edge, collecting a ton of tackles for loss.

For current Razorbacks, he most resembles Georgia Tech transfer Jordan Domineck. Henderson has to add another 15 pounds to match Domineck’s size, but he has nearly two years before he suits up in college.

Through five games in 2022, Domineck has 15 tackles, 4.5 sacks and a forced fumble as a super senior. If Henderson can get to that size and explosiveness by 2024, he could be a wrecking crew as a freshman.

Despite all of his success at defensive end, Kavion Henderson is still adding new wrinkles to his game. He has talked about playing multiple positions his junior season.

“I’m versatile. I can do anything,” Henderson said in an interview with SoonerScoop at RCS Atlanta 2022. “I’ll be an outside linebacker this year too. Coach put a few packages in. I’m an edge guy, I can play with my hand in the dirt, and I can play outside linebacker and middle. I’m ready to showcase my new skills to coaches.”

To meet and hear more from the star defensive end, listen to him walk through his normal day: