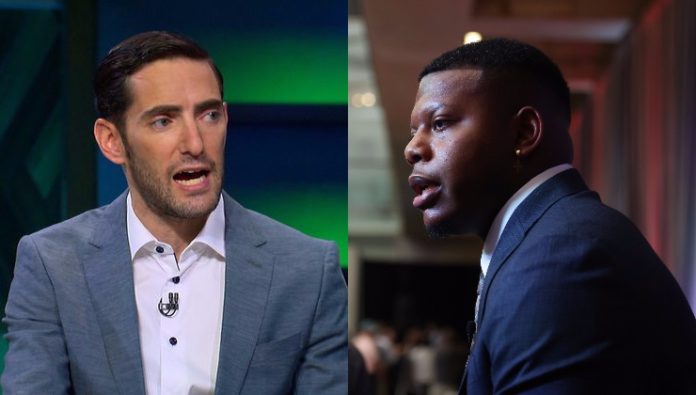 Gambling is illegal at Bushwood, sir. And I NEVER slice.

Las Vegas. City of Lights. City of Death. I’ve never been. My vices are many, but gambling has never really been one of them. In my 20s, I’d go on my birthday to my local casino – whichever it happened to be depending on where I was living – take $200 cash and see how long I could last at the Texas Hold ‘Em table. Usually it was about seven hours. Besides that, the only other real gambling I’ve taken part in was a college football pool with friends (also in my 20s, go figure, huh?).

“The house always wins” is the old saying. I’ve come to learn that doesn’t actually hold true every single time. But on a long enough timeline, they’re going to come out on top more often than you do. The games are rigged, er, naturally built that way. The fine folks who build them know what they’re doing. That’s especially true when it comes to sports gambling. Entire mainstream television and radio shows are dedicated to sports wagering when just, say, 10 years ago such discussion was verboten. Sports gambling was a dirty little secret that was allegedly only undertaken by degenerates and everyone in your office every March. And because some of us have inevitably won one of those, lots came away thinking we know more than we actually do. Even with our favorite teams.

Outrage was not, perhaps, maxed out when Arkansas quarterback KJ Jefferson failed to make any of the All-SEC teams. But that snubbing, combined with his failure to make several top quarterback lists of SEC reporters and analysts, got under the proverbial collars of Razorbacks Nation. Jefferson, whom Arkansas football coach Sam Pittman admitted used last year’s criticism as motivation, will likely use this year’s perceived slights in the same way.

Another Slight of KJ Jefferson

It’s one thing if Joe Schmo at Saturday Down South or Jordan Rodgers or even someone at this site – heaven forbid – were to keep Jefferson off those kinds of lists. Folks in Vegas and their ilk have a different set of standards they’re using when setting college football lines. And some of them are joining in the chorus of overrated, as it were.

That’s definitely the camp that Todd Fuhrman and Payne Insider, of the Bet the Board podcast, are in. They talked Razorbacks this last week and the long and short of it? Offensive coordinator Kendal Briles is helping to hide Jefferson’s weaknesses.

“I’ve watched KJ Jefferson enough to believe that he ain’t the fourth best quarterback in the conference last year, and I don’t think he’s going to be rated nearly that high this year,” Furhman said.

And, yes, that’s the same Todd Fuhrman who bagged on Arkansas coach Eric Musselman ahead of the Razorbacks’ game against Texas Tech in the NCAA Tournament last year. Musselman’s response after the Hogs won was spectacular and could provide some background as to why exactly the seemingly anti-Arkansas line-of-thinking Fuhrman exhibits about Jefferson is so easy.

The line is suggestive of Jefferson’s quarterback rating, which at 164.66 was the fourth best in the SEC. This is an odd thing to focus on considering Bryce Young, the reigning Heisman Trophy winner at Alabama, had the third best rating. Fuhrman’s point was besides the rating, of course, but still.

Insider followed with an elaboration of both their thinking.

“(Briles) has turned KJ Jefferson into a guy that was big and athletic and now, all of a sudden, he’s a real starting quarterback. He’s done some things to accentuate KJ Jefferson’s best attributes, and hide things KJ will never be able to do as a quarterback. And I think that’s ultimately how we should probably gauge KJ Jefferson.”

Again, another strange way to look at it. Charlie Ward, Tommie Frazier, Danny Wuerffel: they were all quarterbacks with major weaknesses who were largely considered the best of their years in college football. Tim Tebow the same. Wuerffel was the only one considered a real NFL prospect and while that didn’t turn out, he didn’t exactly rocket up the draft boards, going in the fourth round in 1997.

Insider’s entire job is to analyze the data in order to determine the best possible win options. A closer look at his take, however, shows he isn’t knocking Jefferson so much as he’s pumping up Briles.

“Kendal Briles has basically set up a paint by numbers offense for KJ Jefferson,” Insider said. “And listen, it’s not to diminish him. He has really come a long way. I didn’t even think he would be this good. But that’s how good Briles is.”

Pittman likely knows he’s fortunate to have Briles still on staff. Consensus is if Briles had a different last name, and wasn’t still rehabilitating the one he has from the associated connotations of the Baylor sexual assault scandal, he would have had a Power Five head coaching job already. The logic about what Insider is saying is that Briles created an offense that allows Jefferson to play a run-pass option almost half the time and from that RPO, he has had basically just one read to make. The reason for the expected drop off is because that read last year was almost always Treylon Burks vs. an opposing defender. Burks was a first-round NFL talent who is now gone and battling his own coterie of critics in the pro ranks.

“If Arkansas can’t find adequate receiver play and someone to just stretch the field on a consistent basis, even with four returning o-linemen, defenses are going to be able to cheat and clog the box,” Insider said. “And if the run game isn’t as effective, the drop off is large, again, when KJ Jefferson has to operate in these known passing situations.”

The expectation is the run game will be effective, anyway, though the wide receiver production is almost certain to take a hit minus one of the school’s all-time greats. Just Saturday, though, Pittman was glowing about the strides the unit has made, especially with the inclusion of Oklahoma transfer Jadon Haselwood and Toledo transfer Matt Landers.

The hosts admitted Arkansas fans were likely going to “come at (them)” but, let’s be honest, they’re not saying anything inherently false. They’re just pointing at what the data suggests.

And when it comes to Vegas, are you going to bet against it?

The Arkansas part starts around the 1 hour 29 minute mark below:

Below are some excerpts from Jefferson’s appearance on The Paul Finebaum Show today.

On the Arkansas football players using media predictions for motivation:

“We look at it. I mean, it’s social media… So pretty much we’re on social media throughout the day so we check, we see it, but it also just motivation to drive us each and every day to just prove everybody wrong. That’s just a standard here. I mean, we’ve always been the underdogs. So just being able to look at those predictions and then just move along. Embrace it. We look at it, use it as motivation to fuel the fire.”

On whether he cares that Arkansas is ranked at No. 19 in AP poll (much lower than Texas A&M, which they beat last year):

“I just also encourage my teammates not to try to dwell on it or rankings and all that. At the end of the day, it doesn’t really matter. As long as you putting the work in and you’re grinding each and every day with your teammate, building chemistry and bonding with each other, the work will just show itself. So just being able to just come in and just keep working, and don’t pay attention to the rankings at all.”

On where he feels he has improved the most from two years ago:

Make sure to see the entire interview here: