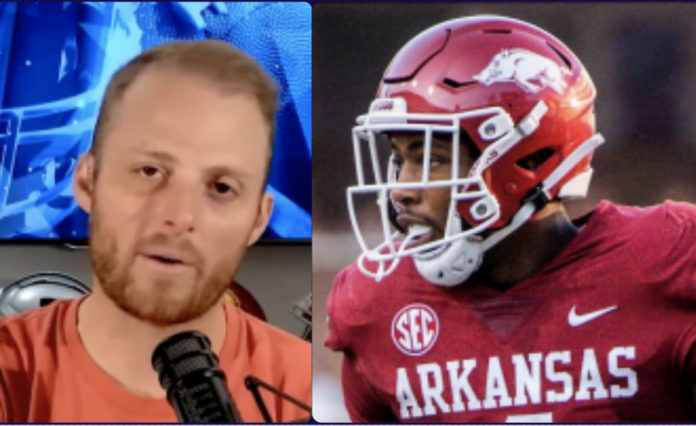 As if what they’re hearing in their own position meetings and from fans on social media wasn’t enough, Arkansas’ defensive backs should have plenty of motivation heading into Saturday’s game against Texas A&M.

Ranked dead last in the FBS in pass defense and giving up 67.4 more passing yards per game than the next closest Power Five team, the Razorbacks’ secondary was the subject of a scathing review by ESPN’s Greg McElroy during his radio show Thursday morning.

“I think if you were to ask Barry Odom, the defensive coordinator…’Hey man, can you simplify it for the guys? Can you water it down?’ I think he’d tell you, ‘We have,’” McElroy said on McElroy & Cubelic in the Morning. “If you look at their defense, it’s not like they’re playing a bunch of crazy structure.

“If I’m Barry Odom, I’m probably on the verge of pulling what little hair I had left out of my head and losing my mind because some of the stuff that they’ve done, it’s totally on the players and it makes absolutely no sense.”

The former Alabama quarterback’s criticism isn’t unfounded. Through three weeks of the 2022 season, Arkansas has allowed Cincinnati’s Ben Bryant to throw for 325 yards, South Carolina’s Spencer Rattler to throw for 376 and Missouri State’s Jason Shelley to throw for 357.

It’s the first time since at least 1990 — possibly ever, as Best of Arkansas Sports’ records only go back to 1990 — that three straight opposing quarterbacks have thrown for 300-plus yards against the Razorbacks.

They allowed only two such performances all of last season and those were against Will Rogers and Mississippi State’s air raid attack (417 yards) and Heisman Trophy winner Bryce Young and Alabama (559 yards).

Cause of the Problem

In Arkansas’ defense, it was dealt two significant blows in the season-opening win over Cincinnati. The Razorbacks lost starting nickel Myles Slusher in the first half and then standout safety Jalen Catalon went down in the third quarter.

Neither of them have played since. Catalon’s injury required season-ending shoulder surgery, while Slusher’s return from his undisclosed injury is imminent. Backup cornerback LaDarrius Bishop is also dealing with a knee injury suffered against South Carolina and is out indefinitely, plus nickel/safety Jayden Johnson and cornerback Dwight McGlothern have been dinged up at times.

“I think by this point, it’s well documented that they have really been hurt in the back end with injuries and the communication has suffered as a result,” McElroy acknowledged. “That’s three guys in the back end that you were expected to rely on.”

They won’t get Catalon back and a timeline for Bishop is unknown, but Slusher is expected to return against Texas A&M. Where exactly he’ll slot in remains to be seen, as Sam Pittman has mentioned he’s capable of playing nickel, corner and safety, but he’s almost certainly going to be among the five starters.

Pittman was also high on Malik Chavis this week. The Rison native played safety last season, moved to corner this offseason and actually started over Hudson Clark last week. However, he could play both positions moving forward.

“I think Malik Chavis is a guy we need on the field, and when he’s not playing corner, we need him at safety,” Pittman said. “I’m not sure if we don’t need him at safety and just put Hud at corner. I think those are questions we have that we need to (answer).”

As much attention as the cornerbacks — namely Clark and McGlothern — get, starting safety Simeon Blair hasn’t gotten off to a hot start in 2022, either. The former walk-on-turned-team-captain actually started ahead of Latavious Brini before Catalon’s injury and has taken on an even bigger role in the absence of the preseason All-American.

However, Blair is Arkansas’ lowest-graded defensive player among the 21 who’ve played at least 25 snaps this season, according to Pro Football Focus. In fact, his 46.6 grade ranks 74th out of 76 SEC safeties who have seen the field so far this year. Of course, Jayden Johnson — primarily playing nickel while Slusher has been out — has been only slightly better, according to PFF, with a 49.4 grade.

Although he’s capable of playing anywhere, Slusher can play only one position at a time. Considering he was a nickel and Johnson was a safety entering the season, his return could allow the Razorbacks to shift everyone back to where they originally planned on playing them. That said, Slusher spent his first two years with the Razorbacks at safety, so he could replace Blair — if the coaches are willing to take his leadership off the field.

The Arkansas vs Texas A&M Matchup

Regardless of how they line up this weekend, a case could be made that the Razorbacks have an easier matchup looming despite it being No. 23 Texas A&M compared to Missouri State from the FCS.

While the Bears had Bobby Petrino calling an offense led by reigning MVFC Offensive Player of the Year and Walter Payton Award (Heisman Trophy of the FCS) candidate Jason Shelley, the Aggies recently made a change from Haynes King to Max Johnson.

Although Johnson, the LSU transfer, led Texas A&M to a bounce-back win over Miami (Fla.), he completed just 10 of 20 passes for 140 yards and one touchdown in the game. As a team, the Aggies have put up just 208 passing yards per game this season, which is next to last in the SEC and 99th in the FBS.

However, McElroy sees Arkansas as a potential “get right” game for the Aggies because of its porous secondary.

“If I’m going to be completely honest, I would love to be going against a secondary that’s struggling,” McElroy said. “If our offense really hadn’t taken flight just yet, I’d love to be in this situation if I’m A&M. This seems like a recipe for success and it’s not like they’re letting guys run open. Dude, they’re not tackling.”

On the flip side, Pittman and the Razorbacks likely hope to use the Texas A&M game to figure out their best combination of defensive backs — and improve to 2-0 in SEC play — before welcoming reigning Heisman Trophy winner Bryce Young and No. 2 Alabama to Fayetteville next week.

McElroy isn’t the only former SEC quarterback who called out Arkansas’ secondary this week. Aaron Murray — who starred at Georgia — was really high on the Razorbacks during Wednesday’s SEC Today show on the SEC Network, but pointed to that position group as a fatal flaw.

“They just can’t stop the pass,” Murray said. “It’s a major, major issue when offenses in 2022 love to throw the football and you’re the last-place defense when it comes to pass defense in the country. That’s it. Man, literally, if they had just average DBs, this team could be a double-digit win football team. But they don’t. They have some of the worst in the country.”

If Blair, Johnson, Clark and company can use that last statement by Murray to fuel them over the final nine games of the regular season, the Razorbacks could prove his other claim true and win 10-plus games this year. Their first opportunity to do so will be in Saturday’s Arkansas vs Texas A&M matchup at AT&T Stadium.

How to Watch Arkansas vs Texas A&M

Here are several picks — including from our own managing editor, Andrew Hutchinson — and computer projections for the Arkansas vs Texas A&M matchup…

For the better part of a decade, Arkansas found creative, heartbreaking ways to lose to Texas A&M at AT&T Stadium. It got to a point where I refused to pick the Razorbacks to win the game until they proved they could do it. Well, that happened last year. Even with KJ Jefferson going down and missing some time with an injury, Arkansas pulled out a 20-10 win over the Aggies and former Arkansas team captain Jerry Jones was finally able to give the Southwest Classic Trophy to his alma mater. Now that they’ve snapped that losing streak, I think the Razorbacks starting a winning streak of their own in another ugly win in Arlington.

I still think it will be ugly, but not quite as low-scoring as I though when making my preseason predictions. Texas A&M’s offense has not impressed me at all – even with the quarterback change to Max Johnson – but the Arkansas secondary hasn’t exactly instilled a lot of confidence, either. On the flip side, the Razorbacks’ offense is maybe even better than expected. They’ll get their toughest challenge yet with a very good Aggies defense, but I think KJ Jefferson is still the difference.

Led by quarterback KJ Jefferson and the ground game, Arkansas will bolster its playoff resume with another win over a top-25 opponent. (Click here to read PFF’s full breakdown)

It might have the nation’s worst pass defense, but 2022 Arkansas isn’t lousy. (Click here to read CFN’s full breakdown)

Even if (Ainias) Smith and (Devon) Achane don’t get quite that carried away, they should do enough for a stingy A&M defense (two touchdowns allowed thus far this season) to get the job done. (Click here to reach B/R’s full breakdown)

ESPN FPI: Arkansas has a 42.0% chance to win (+2.2 percentage points since the preseason)

More coverage of Arkansas vs Texas A&M from BoAS…