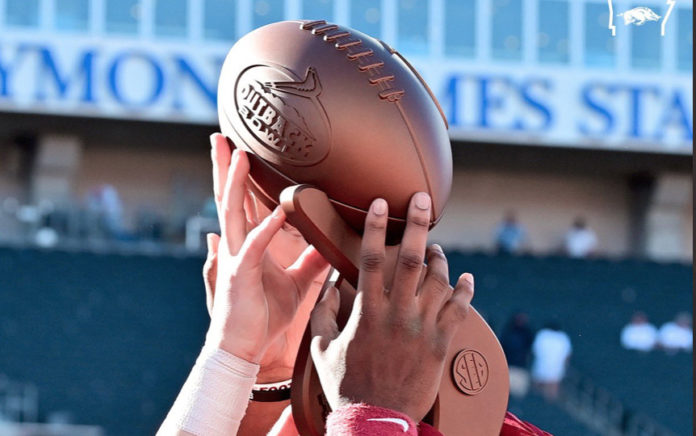 It’s fun to think that because Arkansas is part of the SEC that its player are by and large faster than their counterparts from up north and that, by dint of conference association, it somehow means “more” to the Razorbacks when playing Big Ten teams.

For the longest time, it seemed that neither was the case when the Hogs started playing Big Ten teams in the postseason in 1999. After four tries at knocking off the supposed lumbering big boys from the North in a bowl game, the Arkansas football program finally broke through, beating Penn State in the 2022 Outback Bowl.

“The biggest adjustment we made at halftime was the run game,” he said. “We figured out what they were doing and made that adjustment, needed to run KJ [Jefferson] a little bit more, things like that.

Indeed, in this game, it was the Razorbacks doing to Penn State what they thought they would accomplish years ago when Bret Bielema arrived from Wisconsin – run the ball straight down the gullets of the opponent. They racked up 326 rushing yards, tying a Hogs bowl game record.

It was a masterclass in ground-based efficiency, and will go down in the history books without an asterisk regarding the six Penn State starters who opted out. The Hogs averaged 8.5 yards on 24 carries around the edge and 7.5 yards on 22 carries between the tackles, according to Pro Football Focus.

The game showcased the Arkansas football program’s elite depth at the running back position. In terms of snap count, Rocket Sanders led the way with 29, followed by starter Dominique Johnson with 23. Freshman AJ Green played more snaps (15) than senior Trelon Smith (11), who began the season as Arkansas’ starter and accounted he was moving on after the game.

It’s slightly ironic that these new Hogs look more like what Bret Bielema envisioned at Arkansas than any Bret Bielema team. He certainly had it cooking at Wisconsin, where his Badgers knocked off the Hogs in the 2007 Capital One Bowl. That game is included in the borderline masochistic walk down memory lane below.

It’s a look at Arkansas’ history of bowl games vs Big Ten teams, which makes the Penn State win taste all the more sweet.

It was obvious in the first quarter of the 1999 Citrus Bowl in Orlando that Arkansas’s supposed “speed advantage” was a myth against Michigan. The Wolverines had plenty of speed at wide receiver and at defensive back, while their defense fast to the ball. Still, after handing the Wolverines a touchdown on an early pick-6, the Razorbacks fought back to take a 31-24 lead late in the third quarter. Coordinator Keith Burns’ “Code Red” had turned the game around with some gambling big plays and Michigan was reeling.

In the fourth quarter, with momentum clearly on the Razorbacks’ side, Michigan faced a third-and-long on its end of the field. Tom Brady (yeah, that guy) dropped back to pass. C.J. McClain from his left defensive end spot was quickly bearing down on Brady, and McClain looked prime to make the play that would firmly put the game in the Hogs’ hands.

At the last possible second, with a move that now seems so preternatural for Brady, the Wolverines’ quarterback sidestepped McClain and in a continuous move whipped the ball down the middle for a 25-yard completion to midfield. The Wolverines suddenly perked up and drove for the tying score.

From that point, it seemed like Arkansas couldn’t budge an inch out of its end. A breeze out of the south (the direction Arkansas was headed) had become more of a factor, and a three-and-out and short punt into that wind gave Michigan a short field, from which Brady handled with ease to put Michigan in front. Moments later, the second pick-6 of the game of Hogs quarterback Clint Stoerner on a deflected throw off a receiver gave the Wolverines the 45-31 final margin.

The score looked, to folks who hadn’t watched it on ABC, like a comfortable win for the defending national champions, but it was anything but. Arkansas’s miracle turnaround season under first-year Arkansas football coach Houston Nutt ended with a little bit of a thud, 1-3 over the final four games, but 9-3 overall.

The difference that day was how well the Michigan corners defended and how a future seven-time Super Bowl champion quarterback bailed his team out in the fourth quarter. And to think Brady still didn’t go in the next NFL Draft until round 6, the 199th pick in the 2000 NFL Draft.

Arkansas had been walloped 30-3 in the SEC Championship Game by Georgia on the first Saturday in December, and even though the Hogs were the SEC East Champions (Alabama was ineligible for the title, and the Hogs beat the other two teams at 5-3 in the West, Auburn and LSU, head to head), the league relegated the Hogs to the middlin’ Music City Bowl in Nashville.

It was just as well; it’s hard to imagine Arkansas felt it had much to play for after the Atlanta debacle vs. Georgia, and Hog fans probably weren’t up for another long expensive trip way out east to Florida in the same month. So, it was Minnesota for the Hogs in Nashville.

Arkansas looked inspired at the beginning, striking first against the Golden Gophers with an impressive opening drive on a cold, partly cloudy day in Nashville’s pro stadium east of downtown (it seemed like more than 50,000 seats went unused).

Then the Hogs and quarterback Matt Jones went the next nearly three hours doing little if anything, while Minnesota kicked four first-half field goals. Meanwhile, Arkansas’ defense was embarrassing and outcoached. One play stands out in the second half: Minnesota faced a third-and-way-long but to convert it the Gophers simply threw a deep fade route down the right sideline in front of this writer.

Arkansas’ cornerbacks struggled to defend anyway and typically used a lot of contact, which Minnesota no doubt expected. This time the play drew a flag for interference, a gift first down when the game was still in the balance, the Gophers’ drive continued toward a touchdown and 19-7 lead that eventually reached 29-7 while the Hogs gave little resistance. By then most of the few Hog faithful on hand had headed to the Nashville clubs or back to Arkansas, missing Jones’ backup, Ryan Sorahan, guiding the Hogs to a meaningless final TD.

The announced crowd of 39,183 is still the lowest turnout for the Music City Bowl.

The next time Arkansas played in the SEC Championship Game and lost – this time a competitive 38-28 loss to Florida that most Hog fans still blame on a muffed punt in the end zone that handed the Gators the lead for good – the SEC did the Arkansas program a good and sent them back to Orlando, this time in what had been renamed the Capital One Bowl, to meet 11-1 and national sixth-ranked Wisconsin, led by wunderkind first-year head coach Bret Bielema, who was doing great things with Barry Alvarez’s players.

The Razorback defense played darn-near well enough to have won any of Arkansas’s previous bowl games. End Jamaal Anderson solidified his reputation as a dominant defender who would go in the first-round of the draft later in 2007. Arkansas held Wisconsin, truly a lumbering running squad, to minus-5 yards rushing, 201 total, and forced three turnovers.

Unfortunately, Houston Nutt had already torpedoed any consistency his offense could muster when he decided to alternate two quarterbacks, Casey Dick and Mitch Mustain. The word was while he and a female newscaster from Fort Smith discussed the strategy on a cell phone 15 minutes before game time, he supposedly handed offensive coordinator Gus Malzahn the keys to run the offense.

Anyway, Arkansas has never dominated another opponent quite the way the Hogs did Wisconsin and still managed to lose. The Hogs rushed for 232 yards, 6.8 yards per attempt, and totaled 368 yards. For most of the game, though, the opponent’s 30-yard line stood like a wall to the Arkansas offense, even in its potent “Wildhog” formation.

Darren McFadden had a bruised heel, which was obvious early when he was caught from behind on a long run. Felix Jones filled the void admirably, but execution once inside Wisconsin territory was horribly lacking most of the day.That Arkansas team managed to play its way out of 12 or 13 wins to a 10-4 final record; but of course Hog fans would have taken that mark every year during this past decade.

Surely with broadcaster ESPN’s urging behind the scenes, Ohio State was allowed to penalize five star players over eligibility issues for the opening game of the 2011 season as long as they still played in the Sugar Bowl on Jan. 4, 2011. And, of course, as it would turn out, one of those players, defensive end Solomon Thomas, saved the game for Ohio State in the final 2 minutes, intercepting Ryan Mallett inside the Ohio State 5-yard line after Arkansas’s Julian Horton had failed to “scoop and score” on a blocked punt at the Buckeyes’ 18. OSU, which led 28-7 behind quarterback Terrelle Pryor (another of the five players allowed to participate) at one point in the first half, held on to win 31-25.

This disappointment seemed to rival not only the previous setbacks to Big Ten teams in Hog bowl games, but those other losses of the past – like to Tennessee in the 1990 Cotton Bowl, or those tough losses in the 1960s (Alabama and Ole Miss in Sugar bowls) and 1980s (Auburn and Georgia in Liberty bowls) – where the Hogs appeared outmanned but fought hard, only to be denied at the finish.

Arkansas vs Penn State and other Big Ten Schools

Arkansas had never played Penn State before the 2022 Outback Bowl. The Hogs could have played the Nittany Lions and former coach Joe Paterno in the 1972 Cotton Bowl, but Arkansas choked the SWC championship away in November with a stunning upset loss in Little Rock to woeful Texas A&M and a tie with Rice. Texas, instead, got to be clobbered by a really great Penn State program (Franco Harris, Lydell Mitchell, John Hufnagel, et al) 30-6.

Arkansas fans and athletic administration like to consider themselves among the better traditional college football programs, but the UA seemingly has gone out of its way to NOT play Big Ten teams over the years, other than meeting them in bowl games. The Hogs lost to Iowa in 1925 and beat Northwestern in 1981. That’s it for regular-season matchups.

They beat Nebraska in the 1965 Cotton Bowl long before the Cornhuskers joined the Big Ten. They’ve never played Indiana, Illinois, Purdue, Michigan State or newer Big Ten entrant Maryland. They’re even 0-2 versus Rutgers, two of the worst losses for the program during this most recent decade, before Rutgers joined the Big Ten with Maryland in 2014.

So, against all current Big Ten teams, the record is 0-4 in bowl games and 2-7 overall. Therapy-worthy indeed, although a win over Penn State would do wonder to exorcise the demons. Against teams that were in the Big Ten when they met, the record is 1-5. A mere 6 games played in 128 years of Razorback football against the granddaddy of football conferences seems ludicrous.

But, then again, so is the fact that Arkansas has only played bordering Oklahoma in football a grand total of three times since 1926.