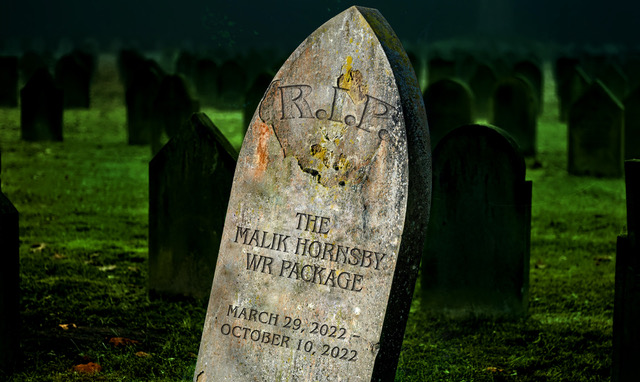 The Malik Hornsby wide receiver package, born in an effort to get the electrifying dual-threat quarterback on the field, has died. It was 195 days old.

On life support since a disastrous appearance in the Texas A&M game, Arkansas football coach Sam Pittman — with Hornsby’s blessing — officially pulled the plug Monday morning. The speedy redshirt sophomore will live on as the Razorbacks’ No. 2 quarterback.

“Even at practice, we took him away from that, and I don’t think it helped him at practice. I think he can become what we all think he can be at quarterback if we just leave him there. I gave him that choice and that’s what he chose, and honestly I was happy he did.”

Birth of the Hornsby WR Package

A once-promising idea formulated by the coaching staff, the special package came into this world following Arkansas’ spring break, debuting in practice No. 4 of spring ball. Upon being shown to the world, the newborn tactic met a chorus of oohs and ahhs from admiring fans who imagined a full and prosperous life ahead for it.

However, conception had happened well before the moment Sam Pittman dropped the bombshell in an interview on Halftime, ESPN Arkansas’ midday sports talk radio show, and revealed it a couple hours later, on March 29.

In fact, using Malik Hornsby as a wide receiver was a major factor in the head coach’s decision to waive his stated policy of not allowing players to return after entering the portal. Hornsby announced his intention to transfer on Jan. 6 and, according to multiple sources, was on his way to Marshall.

A week after entering the portal, though, Hornsby had withdrawn his name and was back with the Razorbacks.

“In that conversation, I said we’re going to give you every bit of opportunity to win the starting quarterback job, but also, if you come back, I need you to be open to playing wide receiver,” Pittman said during the spring. “So we’re doing it at a slow pace.”

The early days of the Hornsby reassignment mostly involved gimmicky-type plays with a lot of pre-snap movement, similar to what Treylon Burks did quite a bit of in 2021. He took jet sweep handoffs, motioned into the backfield for RPOs with KJ Jefferson, fielded a few snaps and went out for swing passes.

Two days later, Hornsby actually went out for a downfield pass and beat both Dwight McGlothern and Hudson Clark deep for long receptions. It wasn’t until near the end of spring ball that the media saw him run something other than a go route.

With questions surrounding their receiving corps, the Razorbacks appeared dedicated to nurturing the package.

When the Razorbacks wrapped up spring ball, talk of Hornsby playing wide receiver dominated message boards and sports talk radio over the summer, which was only amplified when Pittman continued hyping the possibility at SEC Media Days in July.

“He’s a good enough player he needs to be on the field,” Pittman said. “He’s certainly got a chance to help us there (at receiver), as well.”

Arkansas reconvened in early August for the start of fall camp, which ultimately marked the beginning of terminal illness for the Malik Hornsby wide receiver package.

Granted, the media was limited to watching only about 20 minutes of each practice after getting full access throughout the spring, but the Missouri City, Texas, native went nearly a month without being spotted getting any wide receiver work.

One reason for the package’s disappearance was the play of the other wide receivers. Matt Landers joined the team as a transfer from Toledo and immediately impressed with his combination of size and speed. Guys like Warren Thompson and Jadon Haselwood were much improved from the spring, plus freshmen Isaiah Sategna and Sam Mbake entered the mix.

“Now all of a sudden you’ve got all these wideouts that are playing pretty good ball,” Pittman said on Aug. 11. “That doesn’t mean that Malik won’t continue to go out there. It’s just harder to put him out there if we have to take somebody off the field, and my thinking before was that he would be by far the best one we had out there.”

However, the package caught a second wind leading up to the opener, as he was spotted getting wide receiver work on Tuesday of game week.

On the same day Cincinnati head coach Luke Fickell declined to name a starting quarterback, Hornsby took first-team reps at receiver during a team period, went through individual drills with the receivers and then got some one-on-one instruction from wide receivers coach Kenny Guiton before throwing and catching passes in a routes-on-air segment.

Whether or not the timing was a coincidence or a bit of gamesmanship, Hornsby did get 11 snaps against both Cincinnati and South Carolina. In fact, he appeared to be the Razorbacks’ No. 5 wide receiver through two games, behind the trio of starters — Haselwood, Landers and Thompson — and Ketron Jackson Jr.

He picked up 13 yards when he decided to tuck it and run on what appeared to be a double pass against the Bearcats, and then had an 8-yard run and 9-yard reception against the Gamecocks.

In the near upset loss to Missouri State, though, Hornsby was on the field for just one snap, according to Pro Football Focus. Then the following week, disaster struck.

Death of the Hornsby WR Package

With the Razorbacks cruising and in Texas A&M territory with a chance to go up 21-0 early in the second quarter, the Malik Hornsby wide receiver package was summoned once again.

On first down, KJ Jefferson attempted to hit Hornsby on a curl route, but the pass was deflected at the line of scrimmage and he couldn’t reel it in for what would have been at least a moderate gain.

Arkansas went to Hornsby on the next two plays, too. A push pass behind the line resulted in a 1-yard loss when he couldn’t get around the edge and then he bobbled a reverse that he picked up and managed to get back to the line of scrimmage.

That forced a punt and led to the Aggies’ first score of the night, starting a 23-0 run in a game Arkansas lost 23-21.

Hornsby didn’t see the field again that game and was also relegated to the bench the next week, not getting any receiver snaps even though Warren Thompson missed the game with an injury. Instead, Jaedon Wilson got his first significant playing time.

When he also didn’t replace an injured Jefferson at quarterback and he was seen high-fiving fans on the sideline while walk-on transfer Cade Fortin was in the game, the writing appeared to be on the wall — especially when Pittman revealed Fortin had been the No. 2 quarterback “for a while” and Hornsby subsequently scrubbed his Instagram account of any mention of Arkansas.

He shot down rumors of another portal entry the next day, though, and — after a Monday meeting morning with Pittman — was involved in the game plan at Mississippi State. Playing quarterback on the second drive, Hornsby took off for a 52-yard run and eventually replaced Fortin for good.

Getting the most significant playing time of his career at his original position, Hornsby completed 8 of 17 passes for 234 yards, one touchdown and two interceptions, while adding another 114 yards on eight carries.

That performance resulted in Hornsby regaining his role as the backup quarterback and prompted another meeting with Pittman, during which they agreed to pull the plug on the wide receiver package.

“He certainly earned that spot on Saturday,” Pittman said. “I just gave him his choice whether he wanted to stay where he was as the two quarterback now or whether he wanted to move to wideout or if he was interested in moving to corner — obviously, the team needs some defensive back help.

“He’ll have to explain more than I can with it, but there was a big weight lifted off his back I think with the way he performed. I think he validated what he thought about himself as a quarterback and what the team did. He wants to stay right there and be ready if needed at quarterback and not necessarily do the wide receiver/quarterback and all that stuff.”

The Hornsby wide receiver package is survived by the potential of future wildcat packages and the possibility of emergency usage if Jefferson gets hurt again.

While some Arkansas football fans — whose imaginations had been captured by the package in its infant glory — may be mourning this death, the Razorbacks are seeking to revive their season by snapping a three-game skid Saturday at BYU. Kickoff is scheduled for 2:30 p.m. CT and the game will be nationally televised on ESPN.

In lieu of flowers, the family requests that you make a donation to the Razorback Foundation.