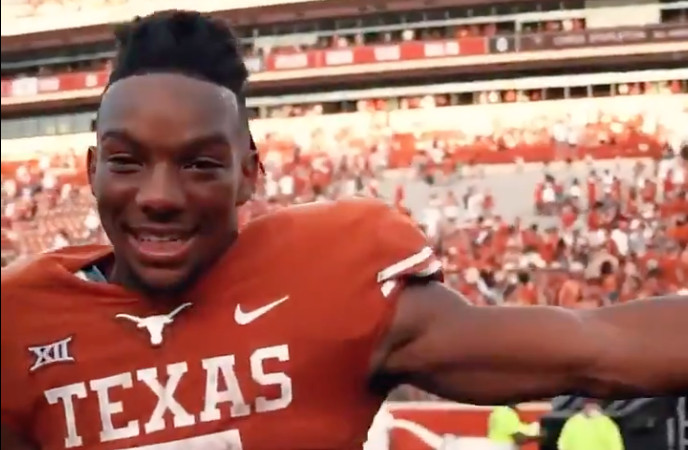 One of the most storied rivalries in Arkansas football will have another chapter written in prime-time Saturday as the fifteenth-ranked Texas Longhorns travel to Fayetteville.

Fans, especially those with a little more life experience, have been waiting a long time to see the Longhorns play in Fayetteville. They seem to be taking full advantage of the occasion with tickets selling out for the first time since 2017.

It’s hard to think of a better time for that boost to come for Arkansas than off the heels of a dicey win over Rice. Razorbacks redshirt-senior linebacker Hayden Henry made it clear that Texas RB Bijan Robinson was on the defense’s mind when putting together its game plan.

“Well, he’s really fast,” Henry said. “He makes a lot of really good plays. He hits the hole downhill. And he’s not afraid to run you over, but he’s also got a great cut. He can juke you out, make moves.

“He also lines up at wide receiver and makes plays for them there, so he’s a very dynamic player. And we have to make sure to limit him as much as we can.”

As for the crowd, Henry is one of the few players on this roster who has experienced a full Razorback Stadium in action.

“I’m anticipating some home-field advantage, which would be something that I haven’t experienced in a while,” Henry said. “I would love to have a serious home-field advantage and get some loud fans in there that want to actually help us out and be extremely loud.

“When you’re out there on third down and there’s 75,000 people screaming, it’s really hard for an offense to convert and make plays. So, I’m really excited to play in front of a huge crowd like that. I hope we can use it to our advantage.”

Barry Odom’s defense was very good against a solid Owls backfield, holding Mike Bloomgren’s offense under 90 yards rushing (t101). Even on their best day, I wouldn’t bet on the Hogs keeping Robinson under 35 yards as a leading rusher.

Robinson is – for my money – the best tailback in the country this season as a true sophomore. Despite just 86 carries in nine games as a freshman, Robinson flashed enough potential to earn national recognition on the Maxwell and Doak Walker Award watch lists.

Longhorn football is a lot of things, but they’re no strangers to top-level running back talent. Heisman winner Ricky Williams sees a similar fate for Robinson in the cards at Texas.

It’s rare to see a player so young have big-play potential every time he touches the ball, but that’s exactly what Robinson possesses. First-year coach Steve Sarkisian has opted to stray from the committee approach which limited Robinson’s production in 2020.

His size paired with explosiveness and the ability to flex outside make him an ultimate weapon for a play-caller, and a nightmare for defenses to game plan against.

Unfortunately, Henry’s group will be without All-SEC second teamer Bumper Pool for the first half of the game following a targeting violation in the fourth quarter Saturday.

With Henry missing the first half of the Rice game for a penalty at the end of the 2020 season and Grant Morgan ejected early in Arkansas’ 38-17 win, the Razorbacks’ targeting woes had to be addressed by Sam Pittman earlier this week. Morgan’s mindset heading into this matchup is one of a man on a mission according to his teammate.

“Let me tell you something, he is pent up,” Henry said. “He is ready to play, and he’s been practicing like it, so I am pumped to get to stand by him and go to war with him on Saturday.”

Without Pool, the Arkansas defense will need all hands on deck to minimize Robinson’s impact on the game – including Illinois State transfer John Ridgeway who underwent an appendectomy just over a week ago.

The broken leg suffered by defensive end Dorian Gerald will test the Razorbacks’ depth in the front seven, forcing Zach Williams to step into the starting role alongside Ridgeway, Markell Utsey and Tre Williams.

If you’re Arkansas in this game, you can’t let Robinson beat you. Though freshman QB Hudson Card looked competent in his first career start for Texas, he doesn’t have any bit of the Heisman hype surrounding Robinson, and you have to game plan accordingly.

Arkansas Defense vs Texas Offense: What to Expect

Expect the box to be stacked as much as possible for the Razorbacks, as those 3rd and long situations will test the Longhorns’ ability to truly take over this game. If Arkansas can get a couple stops to kick off the game then it’ll likely be a dogfight to the bitter end.

Odom has already matched up against Sarkisian once as the head of the Razorback defense, and it didn’t go well for the former Missouri coach. Though the previous showdown resulted in a 52-3 housing of Arkansas, there’s reason for Odom to be optimistic.

In 2020, Alabama was an unstoppable force, and that elevated Sarkisian into the top candidate for a number of coaching vacancies. It is fair to question, however, what the driving force was in creating that powerhouse offense. Texas fans are confident that it was Sarkisian who schemed Nick Saban to a seventh National Championship performance, but far more likely is the talent he was working with.

The 2017 Tide class is the most talented of all time, and Sarkisian had the benefit of working with two first-round quarterback talents, Najee Harris, and the 2020 winners of the Joe Moore Award for the best offensive line group in the country.

After one game, it’s fair to say the Longhorn offensive line has a ways to go to match that performance.

Chip Brown, Texas football insider at Horns247.com, said earlier this week on his podcast: “If we’re going to go down the list of things that need cleaning up, in addition to the critical penalties that Texas had vs Louisiana, like two holding penalties on one drive that went for a touchdown, the offensive line had some holding penalties — they had a link of blocks in the back on the 83-yard kick return that would have been a touchdown by D’Shawn Jamison.

They need to clean up the offensive line.

“I mean, I’m talking to an NFL scout who was at the game and I asking what stood out, and he said, “Gosh, that offensive line looked terrible early in that game. And the penalties were coming late on the offensive line as well.”

Should things come together, this is arguably Arkansas’ best chance to show out on a national stage this season. Though the game is sold-out, you’ll be able to see Sam Pittman’s team attempt to stun No. 15 Texas at 6 p.m. CT on ESPN.

Speaking of ESPN, read more along those lines here: