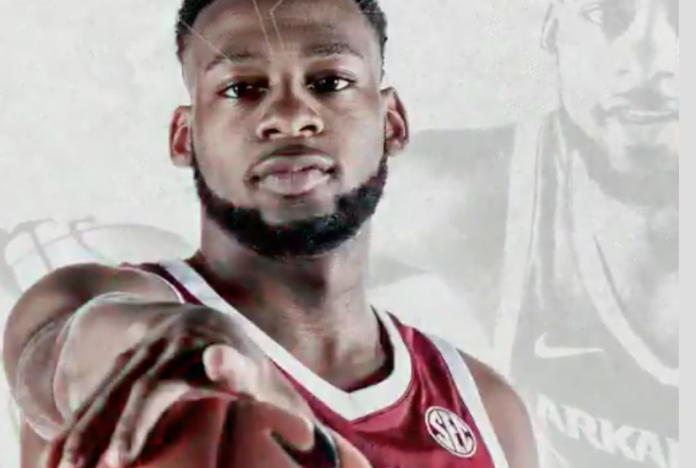 In the last four games before Friday night, Arkansas’ bench had mostly struggled to produce points. And it showed — two home losses, two “meh” wins over mid-majors, and not a single game breaking the 80-point barrier.

For most of the first half and deep into the second half against Austin Peay, it was more of the same.

At last, though, the bench broke through.

Highly recruited freshmen Reggie Chaney and Keyshawn Embery-Simpson delivered 12 points and 14 points respectively, a majority of which came in the second half.  This was the first time two bench Hog bench players scored in double figures since December 6 at the end of the Razorbacks’ six-game winning streak.

The duo bowed up down the stretch, when Arkansas needed them most. Arkansas was down 52-50 with a little more than nine minutes left when Embery-Simpson sliced to the basket to tie the game with a layup.

A couple possessions later, Chaney passed to Daniel Gafford for a monstrous rim rocker that put Arkansas put 54-52. [See the 5:24 marker below]

Then, in the following minutes, Keyshawn Embery-Simpson reeled off seven straight points to push Arkansas to a 61-54 lead. The duo piled on another seven points in the next couple minutes to give Arkansas a commanding 68-57 margin it wouldn’t relinquish. Embery-Simpson scored all 14 of his points — tying a career high — in the game-clinching 28-13 run.

Desi Sills, a freshman point guard of the bench, didn’t score but dished on a few of these baskets. He racked up five assists in the game.

The return of Arkansas’ bench prowess will be vital as the Hogs head into their SEC opener at Texas A&M on January 5. Arkansas still has issues it needs to address, though.

Most pressing is the poor decision making a lot of the freshmen show on defensive switching on the perimeter. No doubt, Mike Anderson wants them to learn by experience so they can make better defensive audibles later in the season, but the unnecessary double teaming on the perimeter is arguably Arkansas’ greatest weakness of the last five years.

It almost cost them again against Austin Peay. Fortunately for the Hogs, the Governors missed 21 of their 25 three point attempts.