Search
Home Arkansas Basketball Around the SEC What Is on The Line When White-Hot Hogs and Vols Clash in... 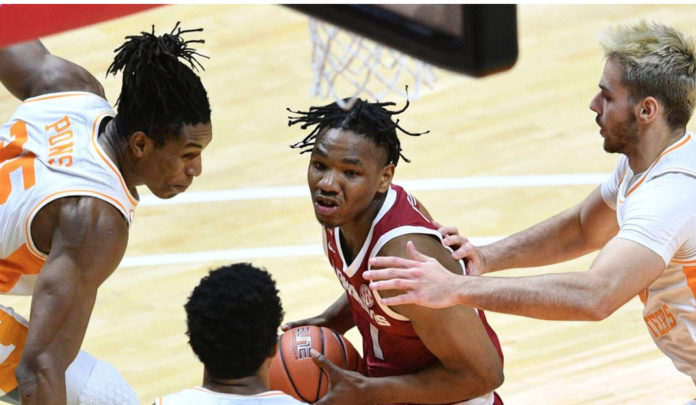 A week-and-a-half will have passed since the Hogs last took the floor on their home court when Arkansas and Tennessee tip off from Bud Walton Arena on Saturday afternoon. The result of that Tuesday, February 8 classic, however, remains vivid across the Natural State and and far beyond: Arkansas basketball coach Eric Musselman, shirtless, celebrating with his team following the Razorbacks’ overtime win over then-No. 1 Auburn.

It was a win that cemented the return of the Arkansas basketball program to where almost everyone assumed they would be for most of the season, near the top of the SEC. A three-game losing streak to start league play had stifled expectations and, in some corners, began to create doubts. Instead, Arkansas reeled off nine straight wins, eight in league play, and re-entered not only the NCAA Tournament conversation, but staked a claim — albeit a longshot one — to being the SEC’s best team.

A win Saturday would bolster such a claim big time.

First, some clarity: Arkansas will not, under any circumstances, finish as the league champion. The Razorbacks will probably not finish with the best, or second-best seed, in the NCAA Tournament among SEC teams. None of that, though, means Arkansas couldn’t leave The Basketball Palace of Mid-America with a victory as the best team in the conference. At the moment, anyway.

Status on the Line in Arkansas vs Tennessee

So, too, could the Razorbacks’ opponent, as Tennessee could exit BWA with perhaps an even stronger case were it to leave with a victory.

Once upon a time – actually, just a month ago – the Volunteers were flailing. They hadn’t hit the hardest of times, but the waves were rocky. They were sitting at 2-2, a fair but not ideal record in the early going of SEC play, when a trip to Lexington to play Kentucky sat on the slate.

At that time, the Wildcats were looking like the SEC’s top team and they subsequently played like it, too. Kentucky beat the pants off Tennessee, a whopping 38-point victory that, frankly, only occasionally felt that competitive. That was January 15, the same day Arkansas had upset then-No. 12 LSU for a second straight win to climb to 2-3 in the conference, the same record as the Volunteers.

Tennessee bounced back in almost the same way that the Arkansas basketball team did after its three-game skid. The Vols have lost just once since, a one-point defeat to Texas in the SEC/Big Challenge. A cynic might argue that a bulk of those victories came against teams unlikely to make the NCAA Tournament. In February, the order of wins was Texas A&M, at South Carolina, at Mississippi State and Vanderbilt. Until Tuesday, Tennessee basketball hadn’t exactly faced the SEC Murderer’s Row.

Then Kentucky visited Knoxville and the Vols returned the favor, notching a 13-point win against the No. 4 team in the country. It smelled a lot like Arkansas’ four-pointer over Auburn the week before, even if the after party wasn’t quite up the level of what went down at Bud Walton:

Finally, the two giant-killers meet for the first time and across the league, folks are pulling out the Spider-Man meme. With neither Auburn nor Kentucky clearly playing their best ball, the third- and fourth-place teams see no better opportunity to take the mantle of League’s Hottest Team.

JD Notae remains Arkansas’ most important player. The senior guard, in his third season with the Razorbacks (he sat his first), is second in the SEC in points per game, averaging 18.8 a game, just point-1 behind Vanderbilt’s Scottie Pippen Jr. Notae has scored in double figures every game this season and he was especially good against Auburn when he scored 28. He’s also tops in the league in steals, swiping 2.4 a game.

But the Hogs haven’t been the same since Jaylin Willams shed his image of role player to star point-forward. A month ago this site featured the 6-foot-10 sophomore as he began his breakout. Since that time, he’s done even more. Williams, too, has scored in double figures in each of the last 12 games, 10 of which have been Arkansas wins. In all 12 games, he’s had at least eight rebounds, including eight double-doubles. His 9.3 boards a game are only behind Kentucky’s Hoover vac of a center, Oscar Tshiebwe, and his 15.3 a game.

The true Arkansas turnaround, though, has come because of Musselman. Before the season and early in it, much was made about the Hogs and their depth. With six transfer players added to the mix and a healthy KK Robinson, Arkansas appeared to be one of the deepest squads in the SEC. Musselman was playing about nine players a night, including 7-foot-3 Connor Vanover who spent much of last year as a starter. Jaxson Robinson was seeing time on occasion out on the wing. Chris Lykes was playing 20-plus minutes a night.  It just wasn’t working when the sledding became tough.

Muss has shortened his bench, gone with his best players more often. Vanover hasn’t played double-digit minutes since late November. Jaxson Robinson hasn’t since January 4. Lykes hasn’t eclipsed 21 minutes since late December and he’s only hit 20 minutes three times since then. The crew of Notae, Williams, Stanley Umude, Au’Diese Toney, Devo Davis, Trey Wade, Kamani Johnson and Lykes on spot-duty have been the It Team during the run.

Tennessee brings an unknown element to Saturday’s showdown, even though the teams are scheduled to play twice. Usually, teams that play twice in conference have already done so for the first time by mid-February. Arkansas will close the season with the Vols, too, but the teams haven’t met since January 2021, a five-point Vols win in Knoxville. They don’t have a potential SEC Player of the Year like the Hogs have in JD Notae. They don’t even have someone of Williams’ caliber when it comes to likely postseason honors. Santiago Vescovi at point, Kennedy Chandler on the wing and John Fulkerson at forward, though, are a trio that has been incredibly consistent, fueling Tennessee’s heat.

The numbers suggest the Vols as the favorites on Saturday, even on the road. That would ink their status as ‘in’ the NCAA Tournament. Arkansas, though, isn’t the same team. Last time in Bud Walton Arena proved that.

Last Tuesday, the Hogs showed the world they could pull an upset. Now they can show the world they’re a top dog force with which to be reckoned.

See our latest on Arkansas vs Tennessee here: