Search
Home Arkansas Basketball Razorback News Of the Biggest Games Hogs Have Played So Far, Gonzaga Was Most... 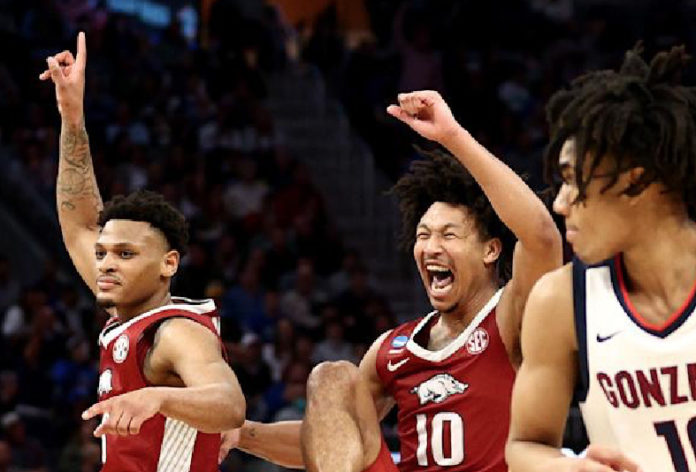 If you wanna BE the man, you gotta BEAT the man. We beat the man, or what appeared to be the man for much of the season. Regardless, we’re the man. And man, what a game.

Yes, the “Gonzaga Saga” continues to be written. Still, there is no chapter that chronicles their much-awaited National Championship.

Last night’s win over the top-seeded Zags brings to mind Mike Tyson’s famous saying: “Everyone’s got a plan until they get punched in the mouth.”

I know Gonzaga has played some good teams this year and has beaten most of them. However, they not played anyone who plays lock-down defense like Arkansas. Even though the Zags started out with a 5-0 lead, we punched them in the mouth and they were flustered throughout the rest of the game. Once we got control, we got control. We forced them into 15 turnovers vs our 8. They out-rebounded us 45-42, but we shot 40% from the field to their 37.5% and, from beyond the arc, we shot 28% to their 24%.

Drew Timme scored 25 but it took him a long while to heat up. He also had 7 rebounds and 3 assists, but 0 blocks and 0 steals and coughed it up 5 times. After 7-feet Chet Holmgren, their “skinnier than Vanover” guy, fouled out with 11 points and 14 boards, they had nobody worth really even talking about except for their Julian Strawther (12 and had 3 assists) and guy who Au’Diese Toney chase-down LeBron blocked into oblivion:

Jaylin Wiliams: Another brilliant performance. 15 points/12 boards/3 assists/1 block. I’ll ask again. What more can you ask of a player than those numbers and no big mistakes? The guy just keeps bringin’ it!

JD Notae: Very good overall despite the many 3-point misses: 21 points/6 rebounds/6 assists/3 steals/2 blocks. Anyone who can play 36 minutes against the #1 team in the country and come away with 6 assists in the same game in which he scored 21 (and played the biggest role in fouling Holmgren out) is remarkable. Never in my life did I think JD would turn into this kind of player. There’s a reason he won so many All-Teams this year and we saw it on display tonight. This is the way he needs to play from here on out.

I’D LYKE TO RECEIVE A TONEY AWARD FOR WADE (ING) INTO THE UNSUNG HERO SPACE?

–Chris Lykes: 4 minutes according to ESPN (kinda generous actually). Don’t know about all that, but I do know he iced a couple of critical FTs without even warming up. Guy’s got ice in his veins at the line.

–Trey Wade: 15 points/7 rebounds/1 assist/1 block/1 steal. Shows up at the right time and throws daggers, whether it’s draining “Treys,” or giving his best effort to break the backboard with a dunk (he’s got some hops), some nights he just feels it. Zags probably didn’t spend a whole lot of time game-planning for him. Sneaky bastard. Let me re-phrase: OUR sneaky bastard.

–Au’Diese Toney: 9 points/7rebounds/1 steal/2 blocks. One of those 2 blocks was on Inspector Clousseau at the end of the game, thus dashing the hopes of the Zags whose trophy case, maintains an empty spot where their National Championship trophy will be placed…….some other time than this year

A lot of people are out there trying to be a little too cute and make the case that because only 1 of the SEC’s 6 NCAA Tournament teams is still alive, the SEC is not that strong of a basketball conference.Here’s what I think about that. First, it’s convenient ammunition for the haters who just have to believe that if something goes right for Arkansas, something must have gone wrong somewhere else or it wouldn’t have happened. I mean, there’s no way we actually “deserve” to be in the Elite 8 is there? Please.

MORE IMPORTANT: We beat Kentucky at home. We beat Tennessee at home. We beat Auburn at home. We beat LSU at home and away. We just beat the #1 team and #1 overall seed in the NCAA Tournament at a neutral site. Of all the wins listed above, I’m thinking Gonzaga was the easiest, or it at least looked like it took less out of us. No disrespect to Gonzaga basketball coach Mark Few’s program – it is clearly elite, but not playing consistently in a meat-grinder of a conference consistently hurts the Zags this time of year.

Now we have Arkansas vs Duke for a spot in the Final Four. We stand more than a fighting chance of making Saturday night the last time Coach K will ever step on the hardwoods as a coach. He’s done enough in his career. He does not need another National Championship to add to his trophy case. It’s not his time. It’s OUR time!!

You can tell we have a vested interest in one side here. But then again, our site doesn’t purport to report in a fair and balanced way.

The same can’t be said for CBS and ESPN. More on Arkansas vs Duke here: