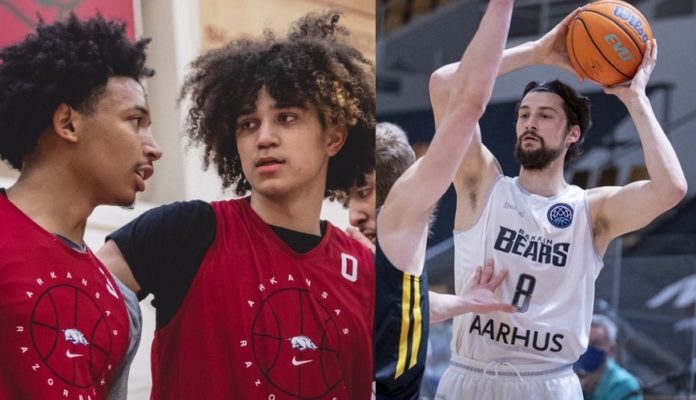 For the first time since its trip to Spain in the summer of 2016, the Arkansas basketball team is set to take its talents abroad at the end of this week.

The NCAA allows its universities one international trip every four years, though the last few years have been postponed for all teams due to COVID-19, causing this summer to have more than 50 NCAA teams planning preseason trips.

With precautions and protocols now in place, head coach Eric Musselman and his team will depart Saturday for Europe, where the Razorbacks will play four games against four different European teams over the course of their 11-day trip. They’ll make their return trip home on August 16 after making stops in Valencia and Madrid in Spain and Milan and Lake Como in Italy.

This all sounds like an exciting adventure, but what does it actually mean for the players and staff of Arkansas basketball?

Life Changing on a Personal and Team Level

First and foremost, this trip offers a life-changing experience for everyone involved. They’ll have the chance to tour world-renowned cities and learn more about Spanish and Italian history and society.

Musselman says the team, “will take this opportunity to learn from and about different cultures and just have a greater world view in general.”

As a group, the team will visit four different cities across Spain and Italy and have plenty of opportunities to bond outside of the basketball court. This trip provides the chance for players to grow on a personal level that extends beyond the hardwood, continuing the team-bonding process for a squad that features 11 newcomers.

“I think this team has become really close in a really short amount of time, especially with the thought that there are only two returners,” Musselman said. “I think the 11 new guys have done a great job of bonding on their own away from the coaching staff.”

For a team losing 87% of its total points and 84% of its total minutes played from last season – both high marks for Musselman during his time at Arkansas – the time spent bonding on this trip could truly push them over the top this season.

The trip offers plenty in the way of on-court improvement, too. Before they even embark on their international tour, the Razorbacks have been granted 10 extra days of practice – the customary amount given by the NCAA to teams planning international trips.

With his innovative and unique approach to practice, preparation and drills, rest assured that coach Musselman and his staff are taking full advantage of these extra 10 days. The clip below illustrates his creativity, as the Hogs utilize an unusual tool to improve their outlet and lob passes.

Arkansas has been using FIBA basketballs and a 24-second shot clock during their drills in preparation of the rules it will encounter overseas. The Razorbacks have also turned off the air conditioning in the gym with the expectation that the gyms awaiting them in Europe will not have A/C either.

Once they arrive in Spain, this newly constructed roster will then be faced with a challenge they’ve yet to see as a team: a scrimmage against someone not wearing a Razorback jersey.

“The 10 practices leading up to the trip will really be beneficial to us, but the games will be really beneficial as well,” Musselman said. “I’ve been a part of a couple of these, one with Arizona State when we went to China, and then at Nevada, we went to Costa Rica. I thought it benefitted the players… It’s good for everybody to get some chemistry on the floor.”

Taking the court together will prove to be valuable in building chemistry between the players, but it will also provide Musselman and his staff further insight into his roster and schemes on both sides of the ball at an early stage.

“It’s really good for the coaches to get to play different rotations and look at different combinations, both offensively and defensively,” Musselman said about how the trip will benefit his staff. “It forces you to have a lot more stuff put in schematically knowing that you have four games coming up.”

Each of the last two seasons has been marred by an early-season losing streak followed by a massive turnaround leading to a winning streak heading into the postseason. It’s possible that the chemistry built during this preseason trip will help speed up the learning process and perhaps prevent those early season struggles altogether.

Here is Arkansas’ schedule in Europe:

Their first game is against Valencia Seleccion – a select team from Valencia. Much like the USA Select teams that compete in international competitions, this team will likely be a compilation of the best players in the area.

Then the Razorbacks will travel to Barcelona to play Barcelona Todo-Estrella (Barcelona All-Stars). Though little information is available on this team, their name indicates it will likely be a combination of local professionals who aren’t currently playing for FC Barcelona – the city’s main basketball organization. If the domestic league La Liga is considered the Spanish version of the NBA, then this team could be compared to the equivalent of a Spanish G-League All Star team.

The Razorbacks’ final two games will be played in Lake Como, Italy, with the first against the Orange1 Basket Bassano. This is more or less a youth program designed to develop young talent in Italy into professional basketball players. They have multiple age-based teams ranging from Under-20 to Under-14.

Finally, the Razorbacks will face Bakken Bears – a historical powerhouse of the Basketligaen, the top domestic basketball league in Denmark. The Bears have won the Basketligaen title a league-record 20 times, and they’ve won 11 Danish Cups. This could be the biggest test of the trip for the new-look Hogs considering the Bears’ average height of 6-foot-5 and history of success.

Interestingly, one of the players Arkansas will face in that final game is Skyler Bowlin, a Paragould native who went to Greene County Tech. He has played for multiple teams overseas since wrapping up his collegiate career at Missouri Southern State in 2011 and recently signed with Bakken.

Unlike regular-season games, Musselman said that he and the staff will not scout these teams ahead of time, but instead use the footage from these games as a teaching tool after the fact.

“Our scouting will be postgame,” Musselman said. “We will take the film and coach the heck out of our guys on the film that we have… I’ll go into each game with a script of a rotation and we’ll go in with a script of what we want to run offensively. Then the last five, six, seven minutes, maybe at that time we will adjust, but I don’t think we will make many adjustments.”

How to Watch Arkansas Basketball in Europe

The four international games will be streamed by FloSports, a subscription service that has previously aired a couple of early-season events involving Arkansas baseball. Yeah, yeah, we know it’s not ideal, but it’s better than nothing.

Years ago, when Musselman was the head coach of the Nevada Wolf Pack, he took his team on an international trip to Costa Rica. Much like the Hogs’ upcoming trip, the goal of that trip was for his players to grow as individuals and as a team, but even Musselman couldn’t have predicted the impact it would make on one of his top perimeter players.

“Kendall Stephens was 0-16 from three (in Costa Rica),” Musselman said. “I’ll never forget, everybody was dressed right after a game and the only place we could meet was in a shower. We were all in there and I asked Kendall if he was ever going to make a three-point shot in a Nevada Wolf Pack uniform. He went out and broke Jimmer Fredette’s record and was the all-time leading scorer in the history of that conference.”

While this impressive feat might be labeled an outlier on an individual level, the impact these trips have on teams should not be ignored. We only have to go back five years to 2017 to find the last time a team made it all the way to the Final Four in the season immediately following an international trip – keep in mind that no trips were taken before the 2020-21 or 2021-22 seasons.

In the summer of 2016, South Carolina head coach Frank Martin took his team to Costa Rica, where they played two games. The trip was important for this team specifically because they had eight newcomers for the upcoming 2016-17 season, not a far cry from the 11 newcomers currently on the Hogs’ roster. The Gamecocks went on to finish 26-11 that year (3rd in SEC) and advanced to the Final Four of the 2017 NCAA Tournament as a 7 seed before falling short against Gonzaga.

The following summer of 2017, head coach Bruce Pearl took his Auburn Tigers on a 10-day trek around Europe – similar to the 11-day trip the Hogs have scheduled in 2022 – in which they visited Rome, Florence, Venice and Milan. The ensuing 2017-18 season saw the Tigers make their first NCAA Tournament appearance in 15 years. The next season after that (2018-19), Pearl led his Tigers all the way to the Final Four. Despite their international journey coming nearly two years prior to their Final Four appearance, the trip seems to have played a role in getting Auburn back on the right track and into the NCAA Tournament, as Pearl has said that group “went to Italy as a team, we came back as a family.”

It’s also worth noting that the last time the Razorbacks took an international trip was in the summer of 2016, when they went to Spain for a few exhibition games. Coming off a disappointing 16-16 season in which it missed the NCAA Tournament, Arkansas used the trip to prepare for what ended up being a great 2016-17 campaign. The Razorbacks went 26-10, finished third in the SEC and made it to the second round of the NCAA Tournament before a controversial loss to eventual national champion North Carolina.

Now with back-to-back Elite Eight appearances under their belt, the 2022-23 Arkansas basketball team is looking to maintain the trend by using this unique opportunity to build on the program’s recent success.

Check out what Eric Musselman had to say about the upcoming trip when he met with the media last week: