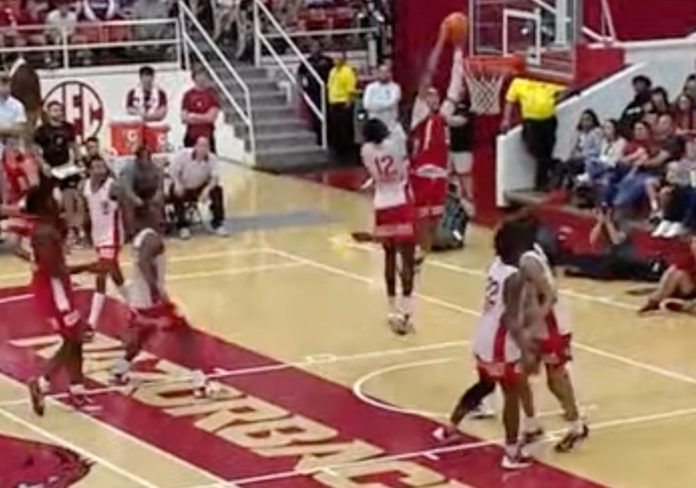 Head coach Eric Musselman’s squad was on full display in front of an announced crowd of 5,147 fans inside historic Barnhill Arena.

Though intrasquad scrimmages sometimes make it difficult to tell whether one team is performing well or the other team is performing poorly, there was still plenty to extrapolate from the revamped Razorbacks’ first appearance in front of their home fans.

These were the two Arkansas basketball sides:

*Davonte Davis was listed on the White Team roster, but he was held out of the game with a knee injury that Musselman described postgame as “not a medical concern” and only precautionary.

Perhaps the biggest question mark heading into next season is how the frontcourt rotation will shape up. With four incoming transfers, two freshmen capable of playing power forward and a returning big man in Kamani Johnson, the projected rotation this early on is murky to say the least.

Each of the big men provide a different level of versatility, intensity, defensive prowess and offensive skill set. And when it comes to offense, Jalen Graham certainly put his entire arsenal on display Sunday afternoon.

The Arizona State transfer finished the game with 25 points on 10 of 11 shooting, including making his lone attempt behind the 3-point line after hitting only one 3-pointer in his three previous collegiate seasons.

“We have felt for quite some time that he’s shot the three pretty well in practice,” Musselman said. “Not that we want him shooting it all the time, but I do think he can keep the defense a little bit honest at times.”

Most of Graham’s points came off of isolation dribble drives or post ups, as he showed off his quick footwork and soft touch around the rim.

“You’re talking about an All-Pac-12, All-Conference player in a Power Five league,” Musselman added. “He played today much like some of the video evals where he was a really great spin-dribble drive guy, a guy that you can isolate.”

This scoring outburst may have been a surprise to some after Graham had a subpar scoring outing on the European tour, in which he averaged 2 points on 33% shooting across all four games. Musselman noted that some guys who may not have been satisfied with their performance overseas have picked up their intensity in practice after the team returned to Arkansas.

“It’s only human nature,” said Musselman. “Some of the guys who played maybe better than even they had hoped, maybe their practice habits have slipped slightly. Then maybe some guys that wanted to play a little bit better on the foreign tour have kind of upped their practice intensity.”

Though he doesn’t provide the same level of defense or rebounding as other big men like Johnson or the Mitchell twins, Graham’s ability to score efficiently at a high level very well could become a necessary commodity against certain opponents – especially if his 3-point shooting has improved to a level defenses have to respect.

Anthony Black’s Versatility Will Be Vital

Black didn’t have a big day in the scoring column, scoring only four points and missing all three of hits shots from the field (all of his scoring came at the charity stripe, where he was 4 of 4), but he did fill up the stat sheet in every other way.

The 6-foot-7 point guard pulled in 9 rebounds, dished out 9 assists, blocked 3 shots and notched a steal on his way to easily the most well-rounded performance of the day.

Even without shooting well, the highly touted freshman led his Red Team to a win over the White Team and played a large role in holding projected top-five NBA Draft pick Nick Smith Jr. to only 7 of 20 (35%) shooting from the field. His length and instincts on defense will make him one of Arkansas basketball’s best perimeter defenders.

“It’s kind of wacky how last season we led the nation in taking charges because we had a player in Jaylin Williams that loved to take charges and had perfected the craft of doing that, and this year we have some guys like (Black) that are really gifted at blocking shots from the perimeter,” Musselman said.

Black’s ability to get his teammates involved offensively is something the Razorbacks have been lacking for several years, as well. JD Notae led the team in assists last season with 3.7 per game, but he was a score-first guard that was thrust into a point guard role.

Jalen Tate led the team the year before with 3.8 per game, and while he did a good job of looking for his teammates, he did not possess the same level of playmaking ability that Black brings to the table. It’s not unrealistic to expect Black to be the first Razorback to average upwards of six assists per game since Jabril Durham in the 2015-16 season.

“We have a lot of dudes that can score the ball,” Black noted postgame. “My game is taking what the defense gives me and trying to make plays for my team – make winning plays.”

Jalen Graham said he enjoys being on the receiving end of a lot of those passes from “a big guard who can pass and facilitate, play defense, help rebound. It’s a big help playing with someone like (Black) that’s not selfish and wants to help his teammates get better.”

After shooting only 30.4% as a team from beyond the arc last season, the Razorbacks’ shooting woes don’t seem to have been fixed with the offseason additions.

As a whole, the Red and White teams shot 7 of 31 (23%) from 3-point range in their scrimmage on Sunday, just a couple months after shooting 28.6% from beyond the arc in four scrimmages in Europe. On Sunday, Nick Smith Jr. led the way in attempts, going 2 of 7 on the day. Joseph Pinion went 2 of 5, Jalen Graham shot 1 of 1, Trevon Brazile hit 1 of 4 and Cade Arbogast shot 1 of 3. Five other players attempted at least one 3 with no makes on the day.

Perhaps the only silver lining in the shooting performance comes in the defensive potential. It’s certainly possible that the length of Arkansas’ wing defenders severely impacted the 3-point shooting of their opponents – their opponents just so happened to be their teammates on Sunday. This doesn’t mean Arkansas will find a way to fix their shooting woes, but it’s worth monitoring any change in the percentages against a less-potent perimeter defense.

Size and Athleticism Will Allow Hogs to Live in the Paint

It’s well-documented that Musselman and his staff put an emphasis on size this offseason, bringing in four freshmen over 6-foot-6 and four transfers over 6-foot-9. That new-found size advantage was put on full display Sunday.

As a group, the five big men jockeying for minutes (Brazile, Graham, Johnson and both Mitchells) combined to shoot over 70% from the field in the Red-White Game. Graham, of course, led the way with an absurd 10 of 11 (91%) shooting performance. Makhel Mitchell shot 4 of 4 from the field while his brother Makhi finished 3 of 4. Johnson finished 3 of 6 from the field and Brazile attempted to expand his range more than the other big men, hitting 1 of 4 from behind the arc. Despite finishing 6 of 12 from the field overall, the Missouri transfer shot 5 of 8 (63%) from 2-point range.

This group of five big men scored 60 of the combined 123 points, easily the most from a single position group. While all five bigs provide a different skillset that will likely be useful to Arkansas at different points throughout the season, they have all shown they can be efficient paint scorers. Expect Arkansas to come to rely heavily on that with its lack of perimeter shooting.

In his projected lone season on the Hill, Nick Smith Jr. is expected to be the leading scorer for the Hogs. While he finished as Arkansas’ No. 1 scorer in Europe, averaging 18 points a game in the three full scrimmages he played, Smith started out his first game in front of Arkansas fans a bit shaky.

Smith finished the game shooting 7 of 20 from the field, including 2 of 7 from deep, plus went 6 of 8 from the free throw line to give him a team-high 22 points on the day, but both of his threes and a large portion of his points came in the final quarter of action.

The Red Team consisted of several capable perimeter defenders including Black, Walsh and Council, and they utilized all of them against Smith at different points throughout the game. Black recorded all three of his blocks against Smith while guarding him early in the game, and the two five-star recruits are no strangers to facing each other on the court.

The shaky start to Sunday’s scrimmage was likely a combination of playing in front of the 5,000+ crowd for the first time, forcing up a few extra shots on a team lacking scoring options and the presence of Black’s length defensively.

Despite all of this, Smith was able to rally his squad late in the fourth quarter, mounting a double-digit comeback and making it a one-possession game late in the contest. Cade Arbogast ultimately hit a dagger 3-pointer to put the Red Team up by seven points with only seconds left, but it was refreshing to see the fight in Smith and his White Team rather than conceding the loss in such a casual setting.