Search
Home Arkansas Basketball Razorback News Whether In 2022 or 2023, Arkansas’ Path to Surpassing Johnny-Come-Lately Gonzaga Is... 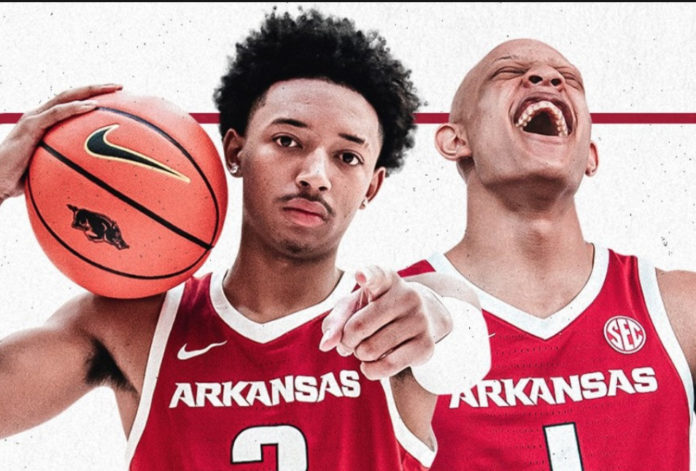 In 1995, when Arkansas was fresh off its second straight Final Four appearance, it seemed almost impossible to think a small school in Spokane, Wash., from the insignificant West Coast Conference, would overtake the mighty Hogs and its SEC status.

However, four years later, the Zags made their first Sweet 16 appearance, and the Hogs decline was in motion. After failing to find the recruiting gems, he had mined in the early 90s, the overall talent and depth of Nolan Richardson’s teams significantly declined.

Although talented freshman Joe Johnson helped the Hogs reach the NCAA Tournament in 2000 by winning the SEC Tournament, a year later Richardson was fired after an angry press conference. Arkansas basketball hit a tailspin with the hiring of Stan Heath, then John Pelphrey. The Hogs weren’t horrible under Richardson assistant Mike Anderson, but hopes of a return to the mountaintop took a tumble when he repeatedly failed to get the Hogs back to even the Sweet 16.

Then Arkansas athletic director Hunter Yurachek did the right thing and fired the popular Anderson.

It didn’t take long for the benchmarks to start falling like dominos. Last season, Musselman guided the Hogs to their first Sweet 16 appearance since 1996. The run ended in an Elite 8 loss to Baylor, the eventual national champion. Again this year, the No. 4-seeded Hogs are in the Sweet 16 by virtue of wins over 14 seed Vermont and 12 seed New Mexico State.

While the Hogs hail from a better conference, have better facilities and are back to being ranked in the Top 25 more often than not, Gonzaga is a notch above. The Zags are a No. 1 seed and are playing in their 12th Sweet 16 since 1999. It was just last season they played in the championship game against Baylor after making their first finals appearance in 2017. In all, the Zags have four Final Fours and five Elite Eight appearances, four of which have come since 2015.

Where Gonzaga Basketball Has Separated Itself

It’s the kind of success Hogs fans enjoyed under Richardson in the ’90s. Gonzaga basketball coach Mark Few has taken the program to great heights after taking over in 1999. The thing that has changed over the years is the level of player Few has recruited to Spokane.

Gonzaga features 10 players on its roster who were classified as four or five stars by recruiting experts. Freakish 7-foot freshman guard Chet Holmgren, a Minnesota native, was ranked as the No. 1 senior in the country, and the highest-rated recruit in Zags history (Former star guard Jalen Suggs was ranked No. 6). Star junior Texan forward Drew Timme was a five-star with 30 scholarship offers. Timme is one of the top post players in college basketball and should be a major concern for Musselman.

Freshman Hunter Sallis, a freshman from Omaha, Neb., is also a five-star and the third McDonald’s American in Zags history (Holmgren was the fourth). Gonzaga beat Arkansas out, among plenty of other programs. to sign him. The fact Gonzaga has only signed four McDonald’s All-Americans as recruits in its program history points to how recently its assumed its national powerhouse status. The Hogs, by contrast, have signed 16 such All-Americans including the two in the class of 2022.

That Gonzaga could do that as a mid-major is still a credit to Few, who has become a national recruiter and landed big-time recruits who put the Zags in position to win the school’s first national championship after two title game losses.

On the flip side, two of Arkansas’ better players are transfer portal finds from Jacksonville (Ala.) State in J.D. Notae and South Dakota in Stanley Umude.

Both of those players are testaments to the coaching and development of Musselman and his system. He needed the portal to jumpstart the Hogs immediately after his arrival and Notae, an All-SEC first-teamer who was No. 2 in the SEC in scoring, has become one of the more electric guards in the country.

The overall talent of the Arkansas basketball program isn’t on par with Gonzaga’s, but it’s sure getting there in a hurry. After the historic run last season, Musselman landed some of the top prep players in the nation and organized the No. 2 recruiting class in the country.

Headlining the class is North Little Rock phenom Nick Smith, Jr. Smith is ranked as high as the No. 6th recruit and at least one NBA Draft expert has projected him as the No. 3 draft pick in next year’s draft. Smith, a McDonald’s American, is joined in the Top 100 by two other in-state recruits – Magnolia’s Derrian Ford and Morrilton’s Joseph Pinion. Ford is a three-time state champion and two-time Arkansas Gatorade Player of the Year. Couple the in-state trio with Link Year Academy’s Jordan Walsh, also a McDonald’s All-American, and Barry Dunning, a four-star from Alabama, and you have a class that even Gonzaga can’t match.

Gonzaga is sitting at No. 86 in the 247 Sports’ rankings with just one player (three-star Braden Huff from Illinois) committed. The Zags will move up after the April signing date and are in pursuit for Duncanville, Texas star point guard Anthony Black. Arkansas is also a strong candidate for Black’s services and Smith has lobbied hard for Black to head to Fayetteville. Oklahoma State is also in the mix and is 247’s ‘Crystal Ball’ prediction.

Stars and rankings don’t always equate to success, but the 2022 class and its prized prep prospects is significant. The class contains future NBA talent and the type of players needed to win a national championship like what we’ve seen with traditional blue bloods like Kentucky, Duke and Kansas and the Johnny-Come-(Relatively)-Lately programs like Gonzaga.

Even before Arkansas went on the latest Sweet 16 run, Hogs fans were looking toward next season but when I spoke with Smith earlier this month. He was cautiously optimistic about the Razorbacks’ outlook:

“For next year, we don’t know what is going to happen,” he said. “We haven’t even moved on campus yet. For people to say we are a Final Four team next year, I’d say that is completely false because we have never put on an Arkansas uniform, we have never practiced with [Musselman]. I have seen the practices but haven’t experienced them yet. We just have to go in and compete and win games.”

Smith may be being a bit modest. Still, that’s smart. Even as a prep senior he has built his brand with help from his parents and has been calculated in what he has said, especially while navigating an eligibility issue during this past preseason. He handled it well, and it eventually it was ironed out.

I had a front-row seat as he and Ford carved through opponents this season. I’ve followed the prep basketball scene since I arrived in Arkansas in 1998, and Smith is the most complete player I’ve seen (that includes Joe Johnson, Malik Monk and Bobby Portis) and could be the second one-and-done in Hogs history following Moses Moody, a North Little Rock native playing for Golden State as a rookie.

Ford, meanwhile, is already built like an NBA player with a 6-4, 200-lb frame bench pressing 300 pounds. He is ranked No. 70 by ESPN but would most likely be higher had he played at a bigger high school or prep school. He can make an immediate impact. He NBA is his goal, too, even if it doesn’t happen after one year.

Walsh is one of the top players in the country and at 6-8 can dominate in the paint and on the perimeter and is another possible one-and-done candidate. The Hogs’ talent level goes up a great deal with this class on the roster.

Smith added: “My expectation is just to go in first and try to win a lot of games, pre-season-wise and practice, but as we get down the line is when we will really find out where we stand and what we can do.”

“It is good for people to believe in you. Arkansas fans are one-of-a-kind, and I think they are the best fans in the country.”

Looking Ahead to Arkansas vs Gonzaga

It wouldn’t be a shock if Arkansas beats Gonzaga in San Francisco on Thursday night. Musselman is a matchup genius, and he will have a good plan in place. The Hogs’ defense is lock-down, and Gonzaga hasn’t seen that kind of intensity so far this year.

The big concern is Holmgren. He creates a matchup problem with his guard skills and ability to block shots and rebound inside. He and Timme work the high-low game masterfully.

Regardless of what happens, the Arkansa basketball program is about to move to the next level, even if Smith won’t predict it. Next year’s roster will include championship talent despite the inevitable departures of a few of this season’s top contributors.

Granted, nobody ever took home a trophy based on potential alone. But for the first time in a very long time, Arkansas won’t need to outperform preseason expectations to come out on top. That’s a great place to start on the path to busting down the door that Gonzaga keeps knocking on year after year.

More on Arkansas vs Gonzaga from Jaylin Williams

On Drew Timme and Chet Holmgren:

“I got to scout them more. I got to learn their tendencies, just they’re they’re really good. They have a lot of skills. Chet, he can stretch the floor for his size. He puts the ball on the ground really good. And Timme, he’s a hard player. He’s really good in the post. He gets to his spots. He knows how to score and they’re really the heart of that team. They play hard. They get a lot done for that team.”

On not having to play March Madness in that dag-nabbed Bubble:

“During the games he’s been defending he’s caring more about what the team needs. He’s doing a lot of stuff that we need him to do. Like he’s become a way better defender since the beginning of the season, he’s hitting those open three pointers.”

“He’s been great at his role now and just Stan’s a great all around teammate. He’s a funny guy. He might randomly say some lyrics, random song out of nowhere, everybody in the locker room just bust out laughing or something like that. But Stan’s a great teammate and I’m happy that he’s all or he’s my teammate.”

On what Razorbacks must improve vs Gonzaga basketball:

“We’ve got to be better at executing, of course. Turning the ball over, we had some turnovers that we shouldn’t have had. Our defense was actually really good these past two games. Like the second game was a pure defensive game and that’s kind of been our thing the whole year, but of course we got to execute on offense. We got to make shots. We’re missing shots that we normally make. And really, we haven’t really talked about it, but I feel like we can play way better. Like we haven’t played our best basketball yet. So I think that the best is yet to come.”

More on Arkansas vs Gonzaga here: