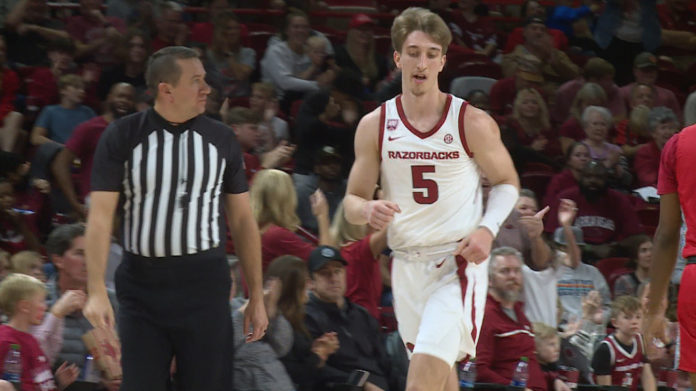 FAYETTEVILLE — Exactly one year after Arkansas basketball squeaked out a tight win in its exhibition opener against a DII team, the only people sweating it out Monday night were those who bet the spread.

The Razorbacks cruised to a victory over Rogers State and covered the 29.5-point spread set by Bet Saracen, winning 83-49 in front of a small, but rowdy crowd at Bud Walton Arena. It was their 35th straight exhibition win, a streak that dates back to 2003.

On a night filled with highlight dunks from the likes of Anthony Black, Nick Smith Jr., Trevon Brazile and Jalen Graham, it was the sharp-shooting freshman from Morrilton who led Arkansas in scoring. Joseph Pinion knocked down 4 of 6 attempts from beyond the arc and finished with 15 points.

The only other player in double figures for the Razorbacks was Brazile, who scored 11 points to go along with his 6 rebounds. He also had half of Arkansas’ eight blocked shots.

Rogers State, a Division II team from Claremore, Okla., shot just 30.2 percent (16 of 53) from the floor and Arkansas killed the Hillcats on the boards, finishing plus-20 (42-22) in rebounds.

There was no television or streaming option for the exhibition matchup, but Best of Arkansas Sports was in attendance and provided live updates from Arkansas vs Rogers State below.

Highlights from Arkansas vs Rogers State

Eric Musselman tweeted out the starting lineups at 5 p.m. The Razorbacks have each of their McDonald’s All-American freshmen in the lineup, as well as transfers Trevon Brazile and Jalen Graham.

After missing the Red-White game for precautionary reasons with a knee injury, Davonte Davis is going through warmups and appears to be available to play in the exhibition. He’s wearing a sleeve on his left leg.

The UA is selling a limited number of general admission tickets to the exhibition game, but they’re available only by walking up to the ticket window at Bud Walton Arena. They are $10.

Bet Saracen actually put out a line for the exhibition. Arkansas is favored by 29.5.

Arkansas won the tip, but Trevon Brazile turned it over to start the game. The Razorbacks end up getting on the board their next trip, as Nick Smith Jr. was fouled shooting a 3. He made 2 of 3 free throws.

It looked like Rogers State was going to get a layup on a back cut, but Anthony Black recovered and blocked it off the backboard. It led to a Smith 3-pointer on the other end.

With a chance to extend the 5-0 lead, Black slipped while dribbling and the ball went out of bounds for Arkansas’ second turnover in less than two minutes. He made up for it, though, by notching a steal on the other end and starting a fast break. Smith was fouled and made both free throws. He has all seven of the Razorbacks’ points.

Rogers State finally got on the board when Gerren Jackson was fouled going to the basket and made both free throws. Nothing has been easy for the Hillcats.

Devo Davis and Ricky Council IV are the first Arkansas players off the bench, replacing Walsh and Black. Jalen Graham is the first player other than Smith to score, making 1 of 2 free throws.

It seemed like Rogers State had a rebound, but Trevon Brazile stayed with it and got the steal. He turned it into a bucket that put the Hogs up 10-4. Davis drew an offensive foul on the other end, bringing us to the first media timeout.

Turnovers are keeping Rogers State in it early. The latest was by Council and led to a layup on the other end.

Oh my, Nick Smith! Brazile missed a 3-pointer, but Smith grabbed the rebound and threw it down for a tip-slam. But Rogers State answered with a 3 to cut the deficit to three. Smith checks out at the 14:13 mark with nine points and two rebounds.

The Razorbacks’ length is giving the Hillcats problems around the rim. It nearly led to a shot clock violation, but Davis came away with the rebound with 1 second left.

Kamani Johnson is the third Razorback off the bench.

Walsh’s first bucket comes on a cut to the basket and pass from Council. Rogers State’s seventh team foul of the game sends us to the U12 media timeout.

Davis picks up his second foul of the game at the 11:33 mark and is replaced by Smith. It was a questionable call, at best.

That prompted a timeout by Rogers State.

Coming out of the timeout, Barry Dunning Jr. and Makhi Mitchell check into the game. They are the fourth and fifth players off the bench. Dunning nearly caused a turnover seven seconds into his appearance, but the tipped pass was ruled off of him. He grabbed a rebound instead, but then turned it over on the other end when going in for a fast break layup.

Some great ball movement by the Razorbacks eventually led to a corner 3 by Brazile, which he knocked down. The possession started with a blocked shot by Dunning.

Dunning also notched a steal on the ensuing possession and Arkansas got a layup by Black on the other end. Dunning has been very active in his short time on the court. He is 0 of 1 shooting with 1 rebound, 1 block, 1 steal and 1 turnover in 3 minutes.

Makhel Mitchell checks in out of the timeout and appeared to make a fast break layup, but was called for a charge. Musselman was NOT happy about it and came out on the court to voice his displeasure. He received a technical because of it.

The Razorbacks’ fifth blocked shot of the game eventually leads to an alley oop from Black to Brazile. The crowd is getting into it.

Joseph Pinion is the seventh player off the bench. He promptly knocks down a 3. (Derrian Ford is the only scholarship player who has yet to see the floor.)

Ford finally checks in after the Razorbacks forced a shot clock violation with 4:19 remaining in the half.

Arkansas commits its eight turnover of the night with about 4 minutes left in the half. Musselman’s goal is to have no more than 9 in a game, so it’ll be tough for them to keep it under that number.

Brazile notched his third block of the game – Arkansas’ sixth as a team – but Rogers State maintained possession and hit a 3 just before the shot clock buzzer. Brazile has 7 points, 4 rebounds and 3 blocks at this point.

Arkansas’ ninth turnover comes with 2:59 left in the half via a travel by Ford.

Anthony Black just put a Rogers State player on a poster. Holy cow. Smith lobbed it up to him and he threw it down with one hand late in the shot clock. He was fouled on the play, but couldn’t finish the old-fashioned three-point play.

After the Hogs’ 10th turnover of the night, Davis grabbed a rebound and fired a perfect bounce pass to Council streaking down the court. He finished the play with a nice reverse layup.

Arkansas turned it over again in the closing seconds, but Black stole it right back and lobbed it to Brazile for an alley oop. It looked like that might be the final points of the half, but the Razorbacks fouled Rogers State with 0.6 seconds left and the Hillcats knocked down 1 of 2 free throws.

Arkansas opens the second half with the same starting five as it had at the beginning of the game.

On the Razorbacks’ first offensive possession, Graham got the ball and made a really nice spin post move to throw down a dunk. He was fouled on the play and completed the three-point play with a free throw. The Hogs had been just 6 of 13 at the line in the first half.

Graham then grabbed the rebound on the other end and went coast to coast with a finger roll through traffic. However, he picked up his second foul on the next Rogers State possession.

Brazile got behind the defense and Black fed him for a thunderous dunk that caused Rogers State to call a timeout. That gives Brazile 11 points and gives Black 5 assists.

It hasn’t been a great shooting night for Nick Smith, who just missed an open 3 from the corner. He’s 1 of 5 from deep.

A quick 5-0 spurt by the Hillcats cuts their deficit to 15.

Walsh, who has had a tough night offensively, is fouled on a drive to the basket and will be shooting free throws when play resumes from the U16 media timeout. He’ll be trying to snap a scoring drought of 2:46 by the Hogs.

Jalen Graham just went to the locker room with a trainer.

Ricky Council IV just missed a 3-pointer and it wasn’t the prettiest thing in the world.

Graham is back on the bench with the team. He appears to be using a vibrating massage thing on his left thigh.

Walsh knocks down a corner 3 and suddenly has eight points. Six of those came in a span of two minutes.

The Razorbacks nearly botched a fastbreak opportunity, but Brazile saved the ball to Davis, who then found Makhi Mitchell cutting to the basket for a dunk.

Joseph Pinion locked up his man and blocked a shot at the shot clock buzzer, forcing the third shot clock violation of the game by Rogers State.

Free throw shooting will probably be a point of focus for Arkansas moving forward. Council and Johnson have each gone 1 of 2 at the line in the last minute or so to make the Razorbacks 12 of 22 for the game. Council followed that by going 1 of 2 again.

Johnson just finished a tough look at the basket and then also knocked down the free throw to complete the three-point play. He’s got four points in just five minutes of action.

Rogers State just committed its 10th foul of the half, putting Arkansas in the double bonus with 9:21 remaining. Kofi Hamilton has fouled out with no points in 14 minutes of play.

After missing a 3 from one corner, Pinion knocked it down from the other corner on Arkansas’ next possession. He’s 2 of 3 from beyond the arc. That gave the Razorbacks a 29-point lead, their largest of the night, but Rogers State answered with a bucket late in the shot clock and the Hillcats called a timeout.

Derrian Ford misses a pair of free throws and Arkansas is now 15 of 29 from the charity stripe.

Yet another foul – the 39th combined foul of the game – leads to Pinion going to the free throw line and he made both of his attempts.

Pinion’s third 3-pointer of the game gives him a team-high 12 points. He pulled up from way deep a little later and drilled it. He’s up to 15 points.

Walk-ons Cade Arbogast and Lawson Blake got some minutes to close out the game.

The Razorbacks win by 34 to cover the 29.5-point spread from Bet Saracen.