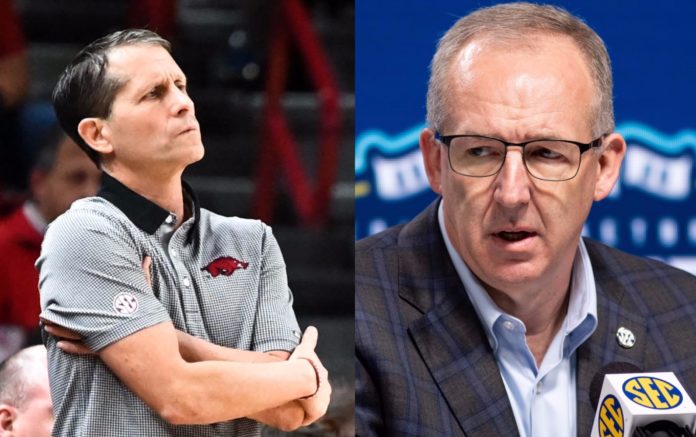 When it comes to one of the biggest hot-button topics in college basketball, Eric Musselman and Greg Sankey aren’t on the same page.

The SEC commissioner is part of a growing segment of administrators and a handful of coaches who want to expand the NCAA Tournament. They seem to think that 68 teams making the postseason isn’t enough and would like to see that number increase to 96 or even 128.

“I think there’s ways for us to think about creating access points that bring more people into the game, which I always think can be healthy if done the right way,” Sankey said when asked about the matter in an SEC Network interview Wednesday afternoon.

He isn’t alone in that line of thinking. ACC commissioner Jim Phillips has gone on the record in support of expansion, as have national title-winning head coaches Jim Boeheim at Syracuse and Scott Drew at Baylor.

Based on responses by coaches at the annual SEC Media Day in Birmingham this week, about half of the coaches in the league are in favor of it, as well.

Musselman is not in that group. The only coach in the conference to reach an Elite Eight over the past two years, doing so in back-to-back seasons, he falls more in line with the general public and other half of the coaches.

“I like the tournament field like it is,” Musselman said. “Growing up with my dad as a college coach, there used to be half the teams that there are now. I think it’s a perfect number in my opinion. It’s hard to make the NCAA tournament. There’s value in the regular season.”

“So I really, really like it a lot. I think that you always want to change, you want to evolve with the times, but certain things — I mean, it’s really working well right now for everybody involved. … I don’t know why you would want to change it.”

Others Taking Musselman’s Side

Say what you want about Jon Rothstein — his cheesy sayings and repetitive tweets can get annoying — but the CBS college basketball insider is certainly passionate about the sport he covers.

As talk of expanding the NCAA Tournament beyond the current field of 68 has ramped up, Rothstein has added another daily tweet to his arsenal.

Other national college basketball voices have also started to speak out against it, as well.

Whether it means anything or not, you can throw Best of Arkansas Sports in that category, too.

A couple of things happened earlier this year that really added a sense of urgency around NCAA Tournament expansion talks.

First, despite winning eight of its final 10 games and making a run to the SEC Tournament Championship, Texas A&M was one of the first four teams left out of the March Madness.

Following the Aggies’ first game in the NIT, in which they eventually finished runner-up, head coach Buzz Williams made an eight-minute statement about his team’s snub from the tournament. He revealed the findings of two days worth of research and described the process as “flawed” and “broken” — a statement he stands by even today.

“I was convicted by what I said,” Williams said Wednesday. “It was just based on what I had studied. The study over that 48-hour period was what I believed I had to do to explain to the people involved, specifically our kids.”

“Do I think it’s good for my career to do that? No. Do I think it helps me get another job? No. Is it offensive to others? Do I sound like a crybaby and all of the stuff that people wrote me, texted me, DM’d me? I understood all of that. And without being condescending, if you look at my career at that moment, I’d been a head coach for 15 years, I had never done that before.”

“But I felt as though it was right relative to the children and the families they represent, and so I don’t regret it, nor will I ever regret it.”

A few months later, Ole Miss snuck into the NCAA Tournament in baseball and not only made it to Omaha, but won its first College World Series in school history. Even though it was a different sport, it’s easy to see how Greg Sankey might connect the two.

“(My opinion) was informed by the fact that I think A&M was playing as well as anyone in men’s basketball last March and didn’t have access,” Sankey said on the SEC Network. “Then you look at baseball, where Ole Miss was recognized as the last team in and is of such competitive quality that it wins the national championship.

“It opens your mind to say that we’re leaving some of these teams that have been in the top 50 out from a NET standpoint that should be looked at differently.”

Missouri’s Dennis Gates and Ole Miss’ Kermit Davis said they’d like the field to expand to 96 and 128 teams, respectively, because they feel like it’d give more players an opportunity to experience March Madness.

They didn’t go into specifics at SEC Media Day, but Tennessee’s Rick Barnes, Georgia’s Mike White and Vanderbilt’s Jerry Stackhouse were also in favor of expansion. Then there was Auburn’s Bruce Pearl, who said he was fine with keeping it at 68, but would also like to see the percentage of teams in the tournament more closely mirror other NCAA sports.

Once again, Pearl – like Sankey – pointed to the aforementioned Texas A&M and Ole Miss examples as reasons to expand.

“(Texas A&M) was a team that you didn’t want to play at the end of the year because at the end of the year they were playing as good as anybody,” Pearl said. “It’s just like Ole Miss in baseball last year. They were the last team in, and they win the National Championship. Those are two pretty good arguments (for) maybe it’s time we expand it.”

The Flaw(s) in that Argument

The idea by Greg Sankey that Texas A&M “didn’t have access” is ludicrous. The Aggies simply could have beaten Tennessee in the SEC Tournament title game to clinch the automatic bid or avoided an eight-game losing streak in the middle of conference play.

The “didn’t have access” argument really only applies to teams like Coastal Carolina in college football, where teams outside the Power Five had zero chance to compete for a national championship until a perfect storm helped Cincinnati crack the field last year.

(Speaking of playoff fields that need to be expanded…)

Also, let’s address this line of thinking that several SEC coaches mentioned Wednesday – that because there are more teams in Division I college basketball, more teams should make the tournament.

However, the additional spots in the NCAA Tournament wouldn’t really be for those new teams. Small schools like St. Thomas, Bellarmine and Tarleton State will have the same access as they always have, which means their only chance of making the dance is winning their conference tournament.

The extra spots would instead go to mediocre teams from the SEC, ACC, Big 12, Big Ten, Pac-12 and Big East. Perhaps a deserving team from a league like the A-10 would get an at-large when it previously wouldn’t, but for the most part, you’d probably have high-major programs with conference records hovering around .500 making it.

Plus, just look at the coaches who spoke out against expansion. Eric Musselman came to Arkansas from Nevada, Todd Golden came to Florida from San Francisco, Lamont Paris came to South Carolina from UT-Chattanooga, Matt McMahon came to LSU from Murray State and Chris Jans came to Mississippi State from New Mexico State.

Each of them knows the pressure of winning a mid- or low-major conference tournament in order to make the NCAA Tournament. If the growing number of D1 teams truly merited expansion, wouldn’t they be in favor of it?

“You can have a great year and have one slip-up, one bad 40-minute game and be left out,” Jans said. “I can understand the argument for.

“But at the same time, it’s the best three weeks of the year each and every year and the storylines, and there’s plenty of David and Goliath stories and all those type of things every single year. If you had to put a gun to my head, I would say I would probably keep the format, but I understand why there’s some traction to expand it as well.”

Regardless of the size of the tournament, there will always be a Texas A&M – a team that is probably deserving, but there’s a finite amount of spots. Arkansas has been on the wrong side of the cutoff, too.

Back in 2013-14, Bobby Portis and Michael Qualls helped the Razorbacks beat Kentucky twice. They won eight of their final 10 regular-season games and entered Selection Sunday with a 21-11 record, but they were left out thanks to a quick exit from the SEC Tournament.

A Potential Compromise for the NCAA Tournament

The cliche of “if it ain’t broke, don’t fix it” certainly applies to the NCAA Tournament, but one of the top minds in the sport has proposed an 80-team format that wouldn’t be bad.

Ken Pomeroy, the mastermind of the KenPom ratings, shared his idea via Twitter earlier this week. In his system, 48 teams – all 32 automatic bids and the top 16 at-large bids – would essentially receive a bye into the field of 64.

For the other 16 spots, there would be 16 play-in games between the remaining 32 teams, which consists of remaining at-large bids and regular-season conference champions who failed to win their conference tournament, as long as they’re in a conference that won an NCAA Tournament game in the previous five years.

This might be the perfect compromise. Regular-season success would be rewarded in the form of not having to play that extra game. Conference tournaments would still matter. Great teams from quality mid-major conferences wouldn’t have the pressure of avoiding an upset in conference tournaments. The field would be large enough that deserving teams like Texas A&M could make it, but not so big that mediocre teams get in.

That is a system college basketball fans could probably get behind.

In Favor of Expansion

Eight of the last 10 NCAA Tournament champions were 1 seeds. One of the other two was a 2 seed, while UConn in 2014 was an outlier as a 7 seed.