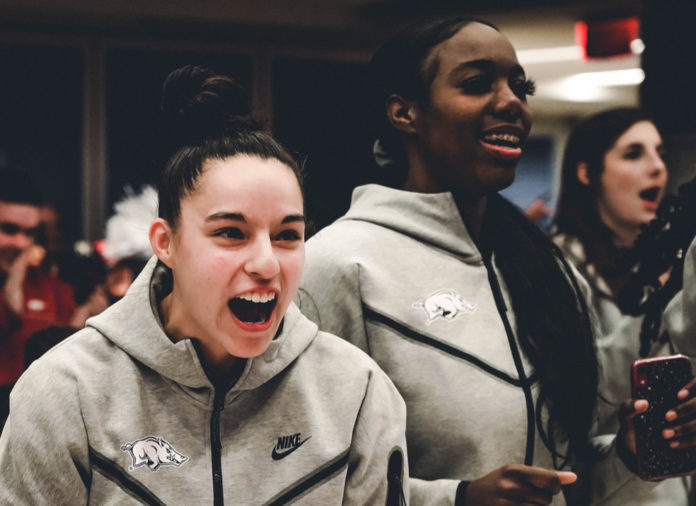 The best team Mike Neighbors has had in his five seasons at Arkansas didn’t get an opportunity to prove itself as such. The 2019-20 Razorbacks didn’t qualify for the NCAA Tournament that year. No one did. The COVID-19 pandemic wrecked sports across the country.

His 2021-22 Arkansas basketball team may not reach the same highs on paper, but the Greenwood native may just have his most dangerous bunch. They’re exactly the kind of 10-seed in this year’s Big Dance that no one wants to see.

Certainly, the Lady Razorbacks had to navigate precarious waters over the last month of the regular season. Sailing was rough as they lost four of their last five before the SEC Tournament. That caused a drop in contention, from fourth in the conference to eighth. But they’re also a team that, just a couple weeks before, had won four of six with the lone two losses coming against No. 1 South Carolina and No. 5 Tennessee. Both of those games were close into the final media timeout. It was all indicative of a team oozing with potential.

And the potential that could yield the Hogs a deep NCAA Tournament run or a quick exit for a second straight season. Such is life as a dangerous team.

When the Razorbacks lose, they tend to lose in spurts as evidenced by the struggle at the end of the year. They lost four out of five in December/January, including defeats to Creighton and the SEC’s No. 13 team, Vanderbilt. Then came the two straight when the calendar flipped to February, one of which was against former powerhouse program Texas A&M, though that one could be partially forgiven considering Neighbors’ past with Aggies coach Gary Blair.

But what makes the former possibility more likely than the latter is behind the final scoreboard tallies. Women’s college basketball is not, whatsoever, a sport known for producing upsets. Every year, only about 10 teams have a legitimate shot at the Final Four, give or take. Arkansas, however, has bucked that trend in recent years and has come close again in 2021-22.

Five of the team’s nine SEC losses came against top-25 teams. South Carolina was No. 1 when the Gamecocks led by just four points with four minutes left. Tennessee knocked off the Hogs twice, but both required the Volunteers to hold their breath in the final minute. Throw in a competitive loss to No. 2 Connecticut from November, a decisive win over LSU late last month, and Utah’s – Arkansas’ first-round opponent – 0-7 record against ranked teams, and the fourth paragraph of this piece makes even more sense.

Amber Ramirez is arguably the biggest reason for it. She may be the deadliest shooter this side of the Mississippi River in the sport. Like, actually. The Mississippi River. The senior has started during all three of years with the Razorbacks, but was asked to shoulder an unbelievable load this season as the team’s only senior. And she’s a redshirt senior at that, making her two years older than anyone else on the roster.

While carrying her mantle of leadership, she’s putting up All-SEC numbers. Ramirez has averaged 15.1 points per game while finishing second in the SEC in 3-pointers made this year with 64. She’s shooting those at 42% clip, No. 3 the league, and another 85% from the line. For fun, she hauls in 4.7 rebounds a game and is third on the team in assists.

She also did this in February to snap a Hogs’ two-game skid.

Her experience has brought her confidence. At the time, Arkansas was without three starters in forward Jersey Wolfenbarger and guards Makayla Daniels and Samara Spencer against Auburn in February. Ramirez went out and dropped 30 points and the game-winner, anyway.

“As proud as I’ve ever been of any team I have ever coached. Any year, any level, any situation. Because of the situation,” Neighbors said. “I will tell you there was a little bit of a Hoosiers moment. We were going to probably use her as a decoy. She said ‘I’m going to make it.’”

Ramirez is a bit like Chelsea Dungee in that regard. The former Arkansas guard was an All-American in her final season with the Razorbacks last year and is largely considered the best player the program has had in the last 20 or so years. Her WNBA career is a testament to that.

Ramirez learned a lot from her. She was a McDonald’s All-American in high school and played at TCU before transferring to Arkansas after her sophomore season. In Fayetteville, she commands a group of three other preps All-Americans in freshmen Wolfenbarger (starter), Maryam Dauda (redshirt) and sophomore Sasha Goforth (starter). Throw in freshmen contributor Elauna Eaton, SEC Freshman of the Year Spencer, sophomore defensive stopper Rylee Langerman and the vet – a junior, no less – Makayla Daniels and a run to the Sweet 16 isn’t exactly out of the question.

If it happens, it will almost certainly be behind another dynamic Ramirez performance or two. Appropriately, she entered the post-game press conference against Auburn with a branded logo shirt.

Just like this team showed for a while. And could show again very soon.