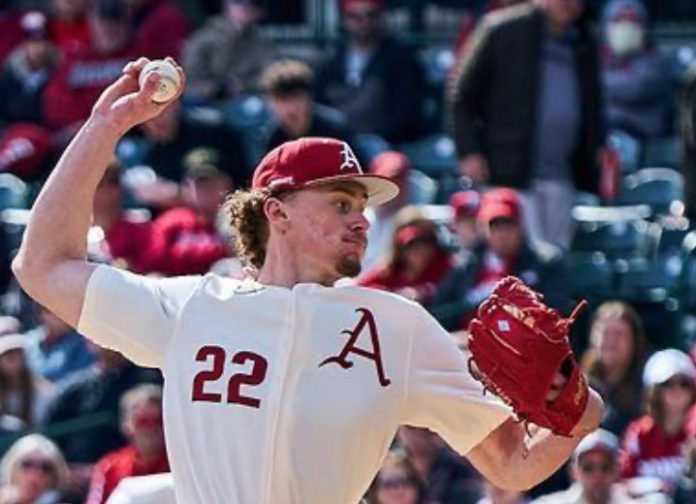 As the Razorbacks started to find their groove against Illinois State, winning the last two games of the opening series, they will look to keep it going as they head to Round Rock, Texas, for the Karbach Round Rock Classic.

The game times all had to be moved up for the predicted weather in the area. Arkansas will now play at 4 p.m. everyday this weekend.

“The weather is a little bit of a concern,” Van Horn said in the series preview presser. “Friday, it looks like it will be cold so we just have to get through that and not worry about it. At least we get to play.”

The Razorbacks swept the State Farm College Baseball Showdown against three top-10 teams to start 2021. This year, they must play Indiana, No. 6 Stanford and Louisiana. Against Illinois State, the Razorbacks got off to a slow start, but got the bats going on Saturday and finished the weekend with 12 hits on Sunday against the Redbirds.

“Us playing a good team, a veteran team with a staff who threw strikes, they really didn’t give us a whole lot,” Van Horn said. “For us to lose a one-run game, win a couple close games, games that were never out of reach… it should keep us on our toes. We’re not overconfident, that’s for sure. We know we’ve got to continue to get better and that’s what we’re going to try and do this weekend against some more really good teams.”

Sophomore second baseman Robert Moore had a stellar opening weekend. He went 4-11 with three runs scored, three RBIs and a home run. Big Hit Bob got into the swing of things after a slow start Friday.

Senior shortstop Jalen Battles and graduate transfer outfielder Chris Lanzilli were the only two players with a hit in all three games. Battles went 4-11 with a home run and Lanzilli was 3-10 in the opening weekend.

“I just hope that offensively, we can get some more guys involved,” Van Horn said. “If that happens, we’ll put up some more runs. Even if the weather’s cold and the wind is blowing in, we still can score.”

Head coach Dave Van Horn announced that Arkansas will go with the same starting rotation of Connor Noland, Hagen Smith and Jaxon Wiggins. Each of them had a good start in the previous series, going five or more innings and allowing no more than two runs.

Out of the bullpen, Senior Kole Ramage, who struggled in 2021, pitched well against Illinois State. He allowed two runs over 5.2 innings, but looked even better than the numbers say.

“Ramage is a lot better,” Van Horn said. “What you saw this weekend is what we’ve been seeing. His fastball is a lot better. His slider is harder than it was last year, three miles an hour. It’s hard to hit. He always had a real good change-up. He didn’t have to use the change-up too much… Really happy for him because he put in a lot of time from the end of last year till now getting ready for his last year of college baseball.”

The Razorbacks have a tough weekend coming up in Round Rock, and will need their players to step up to defend a top five ranking in some of the major polls:

Indiana went 26-18 in 2021, but the roster is very different from last year with only three starters on the roster from last season. Of the 10 players who have appeared in the Indiana starting lineup, there are three returners, three freshman and four transfers.

All three of Indiana’s former weekend starters were drafted in 2021, meaning their rotation is junior John-Biagio Modugno who made four starts in 2021, Louisville transfer Jack Perkins who made one start in 2021 and junior Nathan Stahl who did not make any starts last year.

The Hoosiers are coming off being swept at Clemson. They were outscored 8-33 over the weekend. They lost a lot of talent following 2021 and are still looking to find their identity in 2022.

“Indiana is a team that’s going to come in there highly, highly motivated,” Van Horn said. “They just lost three games on the road to a good Clemson team. The first game got away from them. The next couple games, they had a chance, and it didn’t happen. Whenever you play a team that’s hungry like that for a win, we’re going to get their best shot.”

Arkansas should watch for redshirt sophomore center fielder Bobby Whalen. He went 6-14 with two doubles over the weekend, giving twice as many hits as the next Hoosier. Out of the bullpen, freshman pitcher Luke Hayden could be a weapon for the Hoosiers as their top recruit in the class of 21.

“The Stanford game is a couple teams that there’s a lot of expectations,” Van Horn said. “They have really good players. They went to Omaha last year. It’s going to be a great game.”

Unlike the Hoosiers, the Cardinal are almost entirely returners. Of all the starters in the lineup, one was not on the roster in 2021. That one is freshman two-way player Braden Montgomery.

Montgomery was the No. 23 national recruit in the class of 21. In three games, he went 4-8 with two home runs and seven RBIs. He has also pitched two scoreless innings.

Sophomore third baseman Drew Bowser hit .302 with seven home runs and 41 RBIs last year and led the team with 16 doubles. Sophomore left fielder Eddie Park is off to a hot start in 2022, going 6-13 so far this season.

Coming out of the bullpen, sophomore pitcher Joey Dixon has not allowed a run in 4.2 innings. He kept a 3.28 ERA last season in 35.2 innings of work as well.

The Cardinal have a dangerous lineup. They have a lot of experience and a new ace in the hole with Montgomery. Saturday will likely be a high scoring affair. Both teams have had a weekend to knock the dust off the bats and will likely be ready for a top-10 matchup.

Stanford started the year taking two of three games against Cal State Fullerton who is always a good baseball school and taking a midweek game against Santa Clara. The scores were a combined 12-12 in the opening series with each team scoring 11 of their 12 in one game.

Their Saturday starter in the opening series gave up three runs in three innings and had a 6.07 ERA in 2021 which shows it may be a hitters game on Saturday.

Stanford won its first game of the weekend 5-1 against Louisiana. Both teams have scored five runs and limited opponents to two or few runs in the series.

Louisiana was 32-23 in 2021 but failed to make the NCAA tournament. This year, the Ragin’ Cajuns started the year off in impressive fashion, taking two games against No. 14 UC Irvine. It was a competitive series where Louisiana outscored their opponent 16-14.

“Coach Deggs, one of my former coaches at two different places, he’s done a tremendous job through the years,” Van Horn said. “I think he took over that program, might’ve been the COVID year, but they’re starting to get some of his guys in there. It’s going to take a little more time, but I think they won two out of three this past weekend. All the games have a little something to them. For us, we want to get better, but we’ve got to find a way to win a few games.”

Their opening weekend Sunday starter, Jeff Wilson, had a 1.84 ERA last season in 14.2 innings completely out of the bullpen. In his first start of 2022, he went 4.1 innings and allowed three runs.

The four starters the Ragin’ Cajuns have used combined for 60 appearances and zero starts last year. The three pitchers with the most starters in 2021 for Louisiana have all gone pro.

Louisiana has a good pitching staff. The bullpen has a 3.18 ERA, which is inflated by one pitcher, sophomore Chipper Menard, who allowed five runs in 1.1 innings. Without him, the bullpen ERA drops to 1.27 for Louisiana.

The lineup isn’t super explosive, but the pitching is solid and what Louisiana needs most is starting experience. The game should be lower scoring.

Indiana looks as if it may be in a rebuilding year or at least trying to find the right fit for everyone early in the season with a newly thrown together roster. It would be shocking if the Razorbacks lost that game.

The Stanford game is a marquee matchup with two of the best teams in the country going at it. The Cardinal as well as the Razorbacks have lineups capable of putting a big number on the scoreboard. Arkansas appears to have a pitching advantage, which should give them the edge.

Louisiana is a tough team with good pitching. Their starters don’t have the best numbers, but their bullpen has been hard to crack so far in the early parts of 2022. As the opening weekend showed, Arkansas is also capable of competing in pitchers duels.

The Razorbacks have the ability to sweep the weekend series, similar to how they did last year in Arlington. It is reasonable to believe they will go 2-1 because Stanford is a top-tier team and Louisiana is a tough team as well. Playing Arkansas the day after the Razorbacks play Stanford may benefit the Ragin’ Cajuns if the Hogs have to dig really deep on Saturday.

Overall, the Razorbacks have the talent to win all three games. Looking at each matchup individually, Arkansas should sweep the weekend, but looking at it as a series makes it appear that winning two is the safe bet, but losing two or more games is unlikely. I predict Arkansas pulls off the sweep however after a tough matchup with Stanford boosts their confidence back to where it was last season.