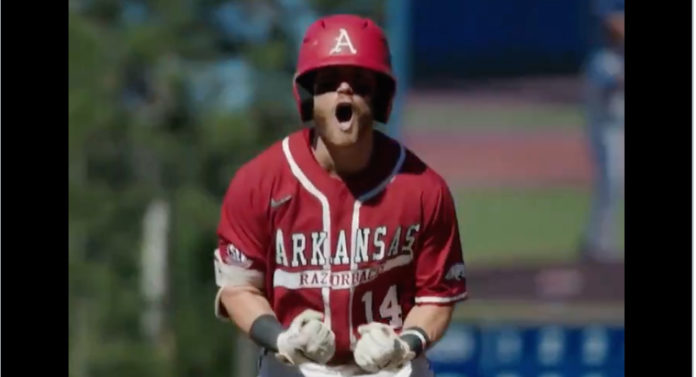 The greatest regular season in Arkansas baseball history is now carrying over its magic to the postseason, too.

After winning the regular season title (becoming only the second SEC team ever to take all 10 series), the No. 1 Razorbacks tore through the SEC tournament, culminating with a decisive 7-2 hammer drop on Tennessee in the finals to win the program’s first SEC tourney title.

Cullen Smith, Arkansas’ first baseman, hit a two-run home run in the eighth inning to slam the door on the Volunteers and make the final result all but a foregone conclusion given closer Kevin Kopps was on the mound.

Smith, who transferred from East Tennessee State a couple years ago and sat out last year, has been huge for Arkansas baseball since he moved from third base to replace Brady Slavens in the first SEC tourney game against Georgia.

“We want to get Brady back, but it was great that some guys picked us up,” Arkansas coach Dave Van Horn said.

“Cullen definitely did that, and that was great to see.”

Cullen Smith finished the tournament 5 for 14 with 7 RBI and 7 runs scored, which took some of the sting off losing Slavens (who had hit 13 homers and an SEC-best 61 RBIs). He also hit three home runs, including a two-run blast to start the semifinals against Ole Miss which proved to be the difference in the game.

In all, Smith was so good that Razorback shortstop Jalen Battles, who won tournament MVP, thought that award should have gone Smith’s way instead.

“I thought Cullen was going to win MVP of the tournament because he was outstanding every game,” Battles said on Sunday.

Instead, Cullen Smith didn’t even get selected to the all-tournament team.

Four Volunteers got chosen to the team. Arkansas, meanwhile, was tied with Florida with three selections each:

The fact that the SEC would shaft Arkansas when it comes to postseason awards isn’t anything new.

Arkansas baseball catcher Casey Opitz, after all, was laughingly left off each of the last two All-SEC all-defensive teams.

But the fact that Vols first baseman Luc Lipcius made this all-tourney team over Cullen Smith is even more perplexing.

Not only was Lipcius on the losing side of the title game, but he had overall inferior numbers during the tournament. Here’s the breakdown,

It’s clear that Lipcius benefited from a name recognition that Cullen Smith simply didn’t have heading into the tournament, and the gaudy blowouts against Florida and Alabama heading into the SEC title game.

While Smith’s hitting is superior, he knows he’s not yet the best at fielding the ball. But he’s working on it:

“I’m having some trouble going after balls to my right, just because at third base, I go and try and get everything to my left, but other than that, I feel great.”

“I feel great kicking the ball. I feel great just stretching, but yeah, it’s definitely a heck of a lot easier than third base, in my opinion.”

The oversight is ultimately a small matter, though.

The Razorbacks, as a team, did what mattered most — win the thing.

Now it’s on to finish the deed on the national stage as a No. 1 seed in the 2021 NCAA Tournament. The Hogs are ready to make amends for that heart-breaker of a finals against Oregon State three years ago.

“The next game is the biggest game of the season,” Smith said. “And when you get into postseason play, that’s actually how a lot of teams treat it, but we’ve treated every single game like that.”

“We just know we’re some dogs, man. We know we’re the best team in the country for a reason. There’s absolutely no doubt about that, and we’re ready to go get it.”

“We’re ready to give it our best shot.”

The 2021 Arkansas baseball team became only the third team since the conference expanded in 2012 to win the SEC regular-season championship and tournament championship in the same season.

Jalen Battles drove in a team-leading three runs in the win, powering the Hogs to their first title in program history.

Battles racked up two singles and hit a solo home run in the triumph.

Kevin Kopps was his dominant self, locking down the final three innings of the ballgame to secure the win.

The SEC Pitcher of the Year struck out three to earn his 10th save of the year.

True freshman Jaxon Wiggins started for the Razorbacks, turning in a strong outing on the biggest stage of his young career. The hard-thrower struck out five in 3 2/3 innings of one-run ball before giving way to the bullpen.

Ryan Costeiu and Lael Lockhart combined for 2 1/3 innings of shut-down relief work in the middle innings, allowing the Hogs to take advantage offensively.

Trailing 1-0 after four, Arkansas scored three in the top of the fifth to turn the game around. Battles’ first of three RBI came on a single to right, scoring Cullen Smith from second.

Zack Gregory then brought home Casey Opitz from third with a single of his own one batter later before Matt Goodheart’s sacrifice fly to left put the Hogs ahead, 3-1.

Arkansas never looked back, extending its lead to 4-1 in the top of the seventh on Battles’ homer. Up 4-2 in the eighth, the Razorbacks once again put up a three-spot to take control of the game for good.

Smith’s two-run blast in the blast in the inning was the final dagger. The native of Tennessee homered to right on the very first pitch he saw to extend Arkansas’ advantage to 7-2.

Staked with a five-run lead, Kopps did exactly what he has done all season. He and Opitz, Arkansas’ most veteran duo, embraced on the mound after the game-ending fly out to center.

How Strong was the SEC This Year?

CBS Sports’ Dayn Perry thinks “there’s a real shot” that the SEC will get 10 teams into the NCAA Tournament’s field of 64 this postseason.

“Four teams — Georgia, LSU, Alabama — have realistic designs on a berth despite having losing conference records,” he wrote.

In all, the SEC has claimed six of the last 11 national championships.

The Arkansas baseball team will be the heavy favorite to make that seven of the last 12.