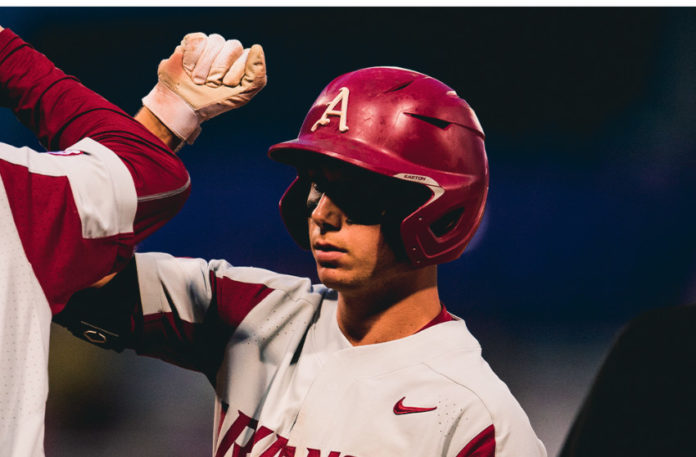 The 2021 Arkansas baseball team had one of the most dominant regular seasons in college baseball, racking up an SEC regular season title and tournament championship, but the 2022 edition may be even better. These new Razorbacks will boast a lot of firepower.

Naturally, there has been some churn in the offseason. The Hogs must replace some good talent in Kevin Kopps, Christian Franklin, Matt Goodheart, Casey Opitz, Cullen Smith and Charlie Welch. Losing so much top-tier talent Arkansas may be why the team was ranked at No. 20 in the recently released Collegiate Baseball Newspaper’s preseason poll.

That’s a lot lower than the Arkansas baseball program, which typically begins seasons in the Top 10, has been accustomed to in the last few years. The perceived slight was enough to motivate the Razorbacks communication department to take off their gloves and hit back via Twitter:

For sure, the aforementioned Razorbacks will be hard to replace, but the Hogs are bringing in the kind of horses with the potential to do it. They have a loaded recruiting class and a few talented transfers. Below, we’ll look at how they may fit in with the returnees.

Let’s look at situation position by position before presenting the projected starting lineup:

Michael Turner will get looks at catcher early in the year. He is a grad transfer from Kent State. He hit .322 with 11 home runs and 88 RBIs over 118 career games with an impressive .975 fielding percentage.

Leach served as Casey Opitz’s backup in 2021. He went 9-35 with a home run and four RBIs over 17 games. He only committed one error during the year.

Max Soliz Jr. is a freshman from Madison, Alabama. He is big for a catcher, standing at 6’5 220 lbs. He will get more looks as a designated hitter than a catcher because he is powerful, as the video below makes abundantly clear, and should get at-bats.

Slavens will be the starting first baseman in 2022. He had a great season in 2021, hitting .284 with 14 home runs and 63 RBIs with a .995 fielding percentage. The returning starter will look to improve on a remarkable junior campaign.

Big Hit Bob is a similar case to Slavens. He is a returning starter coming off a great 2021 season. Moore hit .283 with a team-leading 16 home runs and 53 RBIs. Moore is a proven middle of the order bat with a patient eye, drawing 41 walks in 2021, which helped his .383 on-base percentage.

Freshman Peyton Stovall will likely also start in 2022, probably at third base. He may see some time at second base, where he has experience from high school, because he is a middle infielder. Don’t expect Arkansas to use him at shortstop since that is such a crowded position for the Razorbacks.

Check out his natural swing here:

As Arkansas’  top-ranked freshman in 2022, Stovall is too talented not to see the field somewhere. He is a natural middle-infielder, but with both positions being occupied by returning starters, he will likely make the temporary move to third similar to what Casey Martin did in his freshman year.

Cayden Wallace played third in high school, but spent the majority of his time in right field last season. Wallace will likely stay in the outfield, but he can shift over to third if that’s where he’s needed.

Kendall Diggs a top-150 national recruit and Arkansas’ fourth highest ranked position player in this freshman class. The Olathe, Kansas native is natural third baseman. He could see some time during midweek games or if he is needed to play.

Jalen Battles is the returning starter at shortstop and will be the starter when the season begins. Battles wasn’t the best hitting shortstop in the country, but his hits were timely. He is a rangy defender who can make the tough plays look easy.

Shortstop is one of the Razorbacks’ more congested positions with four incoming freshmen listed there. Drake Varnado is the second-highest ranked position player Arkansas brought in for 2022. He could be the backup to Battles with Stovall and Moore playing third and second base. Stovall and Moore both have experience at shortstop as well and could easily slide over in a pinch.

Jude Putz and Reese McWilliams are also freshman shortstops. Putz was the higher ranked recruit, so will see time if either of them are needed during weekday games. Neither will likely see time at shortstop in weekend games with the depth the Hogs have at the position.

Cayden Wallace will definitely be a starter in 2022 after an amazing freshman season where he hit .279 with 14 home runs and 44 RBIs. He will likely start in the outfield. He spent most of his time in right field last year, but could transition to center field with Christian Franklin leaving a hole there.

Jace Bohrofen is a sophomore transfer from Oklahoma and a former high ranking prospect from the class of 2020. He will likely start in the outfield as well. He has the athletic ability to play center field, but could fill in left field if Wallace is named the center fielder.

The third starter is more up in the air. D’Arcy is the highest ranked freshman outfielder on the roster, being ranked just outside of the top-200 nationally for the class of 2021. His name is in the running.

Zack Gregory and Braydon Webb split time in left field in 2021 and that is another possibility for 2022 with both of them returning. Webb and Gregory are great defenders but had underwhelming offensive seasons in 2021. Gregory hit .245 with three home runs and 19 RBIs while Webb hit .174 with six home runs and 16 RBIs.

A dark-horse contender for some playing time is Landrey Wilkerson. He was originally a part of Arkansas recruiting class in 2019, but instead went to Crowder College and had a monster 2021. He hit .360 with 20 home runs and 72 RBIs for the RoughRiders. The question is if those numbers will carry into the SEC.

Another couple players who will be looking to fill in for platoon opportunities are Zac White and Cameron Leach, the brother of sophomore catcher Dylan Leach. White went 3-12 in six games in 2021 and three hit-by-pitches helped him to a .438 on-base percentage.

Soliz Jr. is a big hitter that Arkansas will want in the lineup. He could possibly turn into a catcher-turned -hitting machine similar to Charlie Welch. Dr. Pinch-Hit became a hero in the Regionals last season after having a fantastic year at the plate with his somewhat limited at-bats. Arkansas fans would rejoice to have another Welch-caliber bat in the lineup and best case-scenario Soliz Jr. will be the new Charlie Welch. However, it would take time to develop as Welch was a grad-transfer and Soliz is a true freshman.

Landrey Wilkerson could see time at DH if his bat does indeed transfer into the SEC. He had great numbers at Crowder College and if he’s able to replicate it, he could spend time at DH due to the crowded outfield.

DH is a fairly easy spot to throw someone into when they need some at-bats or if a position is crowded with talent. This could leave a number of players getting reps at DH. Kendall Diggs or Drake Varnado could see some time there due to the infield being crowded with talent. Michael Turner could get time at DH if Arkansas goes with Leach at catcher.

The designated hitter spot presents a lot of opportunity and a number of players could fill it throughout the season.

In summary, the 2022 lineup has a lot of potential. Yes, replicating the 2021 Razorbacks’ regular season dominance will be very hard, but this squad has the potential to surpass their predecessors in the postseason to nab Arkansas baseball’s ever-elusive first national championship. The season may rely on these talented freshmen to deliver, but Arkansas has a history of freshmen having successful seasons such as Casey Martin, Heston Kjerstad and Cayden Wallace.

A baseball season is long and brutal. There will be opportunities for players to fill positions on rest days during the many games. The Razorbacks’ lineup will likely take on many different forms throughout the year, but all things being equal, expect this projection to reflect Arkansas’ average lineup Arkansas in 2022.

No matter how powerful the bats will be, pitching matters. A lot. We’ll dive into that subject in future posts, but for now, here’s a piece on one of the Hogs’ most promising young flamethrowers: